Hey Cuties, I’ve gotten way behind on my TV watching so I’ve been getting caught up on some of my favorite shows. I probably watch more TV than the average person and I have zero shame. I believe in balance and that means documentaries, comedy, sitcoms and reality TV.  With that said I have been watching Growing Up Hip Hop ATL weekly.

This is a sponsored conversation written by me on behalf of The bLink Marketing Network and Growing Up Hip Hop Atlanta. The opinions and text are all mine.

So let’s talk reality TV, this one is a bit different than the others. This one is based on the children of some of our iconic music makers out of the A (Atlanta).  With that said reality TV is drama and this show has plenty of it. Entertainment comes in a variety of forms and I enjoy them all except horror/thriller and some sci-fi. Let me translate the situation for you. Shaniah Mauldin: Is the daughter of mega-producer Jermaine Dupri.

Reginae Carter: Is the daughter of rap star Lil’ Wayne

Ayana Fite: Is the daughter of The Beastie Boys mainstay, DJ Hurricane

It is hard to grow up in the shadow of your parents especially when you want to be in the industry.  Naturally, people will assume you got to where you are because of your parents. They also think you are spoiled and have no work ethic. Sometimes these things are all very true, but sometimes they aren’t.

Episode 5 focused on Bow Wow with a touch of Reginae Carter. I’m going to focus on Bow Wow’s story.

Backstory… Ms. Deb fails to mind her business and decides that Bow Wow needs to work out his issues with his father. His father was an alcoholic and wasn’t there for him when he was a kid. As a result, they are both hurt; his father lashed out on social media and said some crazy things.

Bow Wow, has decided that he doesn’t want anything to do with his father at this point in life.  Ms. Deb and Bow Wow’s father have history, not like that though.  She feels Bow Wow needs to talk his issues out with his father. Bow Wow has a six-year-old daughter and she feels that is more of a reason for the two to fix their broken relationship.

Ms. Deb loves them both and wants to see Bow Wow get past the pain and hurt of it all. Although she needs to mind her damn business she did keep it real with his father. She let him know as a man and as a father you failed your child.  I feel like I know how this is going to play out but I hope I’m wrong. We will stay to stay tuned to see it unfold…

Bow Wow’s other issue is he wants to get back into the music game but he lacks focus. He started music at like 6 or something crazy and killed the game until he was a teenager.  Can you imagine your peak moment in life happens at like 16? Where do you go from there? How do you bounce back as an adult? You struggle to find your place in life now like he is doing, you dabble in acting and you frequent the strip club. Oh, and you go back and forth with wanting to be with you daughters mother and not wanting to be with her. You know because you are famous but now she is tired of the drama so she doesn’t make it easy for you to just come crawling back.  Although he did apologize to her for the things he has done in the past. He thanked her for pulling the weight and that was dope. But she didn’t want to just take him backs o he got an attitude. Mature much?

Of all the cast members Bow is the only one who has had a solid career. The others are trying to get a piece of the success he has achieved many years ago.

QUICK THOUGHTS ON THE OTHER CAST MEMBERS

Reginae Carter: Is celebrating her 18th birthday and she is ready for a full on turn up celebration. Her fellow cast mates did a birthday dinner before the big party. They dinner was supposed to be a reconciliation for Brandon and Reginae who had a major blow out a couple of episodes ago. Spoiler Alert: That didn’t happen. Her family has gotten involved and the ish is about to get all the way off the table. Come on man, she is Lil Wayne’s daughter you probably shouldn’t mess with her.

Brandon Barnes: He wants to put on a showcase in a week to prove that he can stand on his own two feet. The problem is he has unsolved issues with Reginae that come to a total and complete boil.  He acts like he is a legend in his field and he is not. He is mouthy and rude and annoys me week after week.

Shaniah Mauldin: Her storyline has been minimal. She is Jermaine Dupree’s daughter and that is about all I know about her. I don’t know what she wants to do and or be. Her quiet peaceful personality is swallowed up by her larger than life castmates.

Zonnique Pullins: Has two famous parents but she is a former member of the OMG Girlz. Now that she is an adult she is trying to branch out on her own. The problem is she still relies on her Mom’s help and they don’t always agree. She has decided to fire her Mom and work with Ms. Deb. She is a good girl just trying to make a name for herself.

Ayana Fite: I didn’t know this girl existed until the show. She has an interest in fashion but seems to be suffering from “jealous girl syndrome” and that isn’t cute. She has a “friend” that she wants to be her girlfriend but ole girl isn’t about that title life.  I feel like I know how this is going to end. 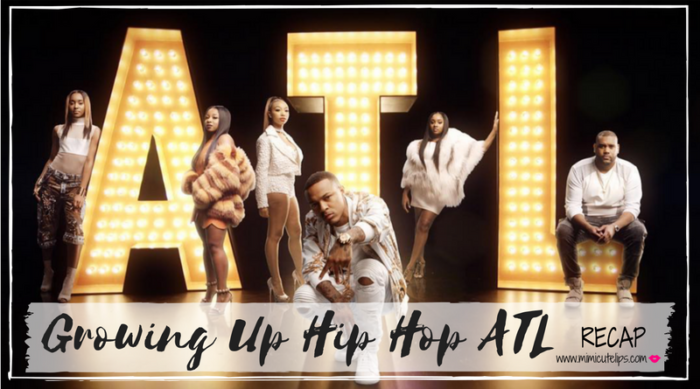 What do you have to say about the drama? Did you struggle to step out of the shadows or you family?Chat with me in the comments below or FB, IG or Twitter.