I have been going so hard for MimiCuteLips this year that I hadn’t had a real chance to just chill with my friends. Babe and I have attended some weddings here and there and I’ve had a pre-birthday Brunch with a few. But, on Saturday I found a way to blend everything together. #MyReason because our friends are dope and we always have fun with them. I thought it would be cool, but I didn’t know just how epic it would really be. I had a birthday on the 18th and Babe had a birthday on the 27th so we decided to do a post birthday celebration. A Battle of the Sexes Game Night, tailgate style to be exact. I love gaming and even when I’m online, I’ll use sites like SwankyBingo.com to get my gaming fix. Bingo is usually my favorite because it doesn’t require too much skill but I’m pretty much up to playing anything!

This post is sponsored by the At Home Store in partnership with MomSelect. They are so dope for collaborating with MimiCuteLips. We are proud October babies and I’m a New York Giants fan so went for a football tailgate theme. What started out as a Mommy Party turned into a Mommy & Daddy Party. We did a play on the “Game Night” theme and made it a battle of the sexes. The dope folks over at the At Home store helped me pull it all together. They rolled out the astro turf for me.

They sent me a party box with all kinds of goodies in it. Peep this hilarious instagram video to see what was in there. Since we had a Game Night Tailgate theme we told our guest to represent their respective team if they would like. This means we were going to need some referees. Babe found these cute shirts and ordered them for us. I visited the At Home store; the nearest location to me was in Woodbridge, VA. It is a new location, so it was my first time there. I had only been to the Manassas, VA location. The At Home store sponsored my trip and I had so much fun shopping. As I recap our Game Night Tailgate I will point out the items I purchased from the store.

In true host fashion, you have to put in work. Shout out to the ladies, they each offered to help when they arrived. After saying no several times I finally took them up on their offer. The Kick Off Chili was percolating in the crock pot on the far left of the bar. I knew this EAT sign was mine the minute I saw it in the At Home store. You know I loved my #FatSnacks so this was a quick win. {It now lives in my kitchen, duh.} When you go to any party you really just want to know where the food is. We went for the typical game day food to be consistent with the theme. We had three types of chicken wings, Touchdown Lemon Pepper, Field Goal Jamaican Jerk & Delay of Game Old Bay. Like game day we ate our meal out of these paper boats. At Home Purchase: Eat Sign {16.5 x 10″$15}, the bowls holding the chicken, the glass barrel mugs holding my yellow penalty napkins. You can’t have Kick Off Chili without chips so we had to have some Tostitos scoops to make the experience easier. We also had Mango Peach Salsa and guacamole, the salsa was a huge hit. Did you peep the At Home Store cups? I had them sprinkled in with my game night tailgate decor. This was a snack and beverage table; we had a variety of Safety Soda. It was festively adorned with the New York Giants tablecloth. I dressed up our Water Break water bottles like referees as well as the beverage buckets. I had a black bucket and white bucket and I added strips to each one. These buckets can be used for whatever you want although I decided to use them to keep our beverages cold. You can’t go wrong with peanut M&Ms At Home Store Purchase: Freezer Glass Barrel Mugs {$8 for a box of 4} I had eight in total, Buckets {$10 each} & M&Ms 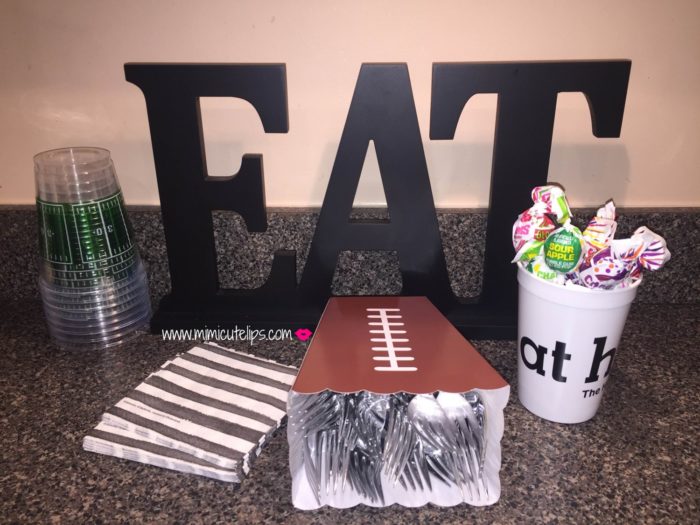 The utensils were served in this festive football box. It is originally designed for popcorn. The utensils were super cute, although they were plastic they looked like fancy metal flatware. They even had a fancy design on them and everything. At Home Store Purchase: Flatware, sign and referee napkins. We can’t just eat chili and chicken, we need the healthy as well. End Zone Veggies and Hail Marry Fruit At Home Store Purchase: The plate and bowl holding the fruit and veggies. This was the main snack table, it included Half Time Chocolate Pretzels, I drizzled them with milk chocolate and white chocolate. You know reminiscent of a football. The Home Store goodie bag cups came with Big Game Blow Pops, At Home Store Goal Post Gift cards and a bag of Concession Stand Popcorn. At Home Store Purchase: More glass barrel mugs, the boats the pretzels are sitting in & M&Ms. L to R: Te, {The Style Medic}, Faye {The Faye Factor}, Mi and my bestie Chrissy We mixed and mingled and got our eat on before we settled in for games. Fun Fact: The girls were sitting on the opposite side but the chairs were hard and hurt their butts so we switched. The boys were annoyed and we laughed like crazy. As you see they totally did it. This was the perfect way to kick off our Battle of the Sexes Games. It was about 30 of us playing altogether. Battle of the Sexes Jeopardy – Babe was doing an At Home Store commercial. He did them all evening long.

I had so much fun creating this game; Jeopardy is one of the easiest games to make. I already had this foam board; I use it to take pictures. I had six categories so I made six even columns using a ruler and a pencil. I created the game cards on my computer and assigned a dollar value to them. I had five questions for each category so I used $100 – $500 values. My categories were: Music, Sports, Movies, Pop Culture, Boy Stuff & Girl Stuff. Because this is Battle of the Sexes only the girls could do the boy stuff category and only the boys could do the girl stuff category. I’m not going to say the boys won, I’m just going to say we had so much fun playing this game. The trash talking was the equivalent of Philadelphia Eagle fans. I’m just saying, they have a reputation. Babe and I collaborated on the questions, we didn’t want it to be too easy but not extremely hard either, and we took inspiration from bar trivia questions to help with ideas when we ran out of them ourselves. We also included in actual Jeopardy questions to make it extra-authentic. I just wanted you to see how out of control the boys were. I’ve not laughed this hard in a really long time. I think they call this passion. We followed up Jeopardy with jumbo Jenga. Can I just say that we played this one game for over an hour. SERIOUSLY! We had the most skilled Jenga players ever, I had no idea. 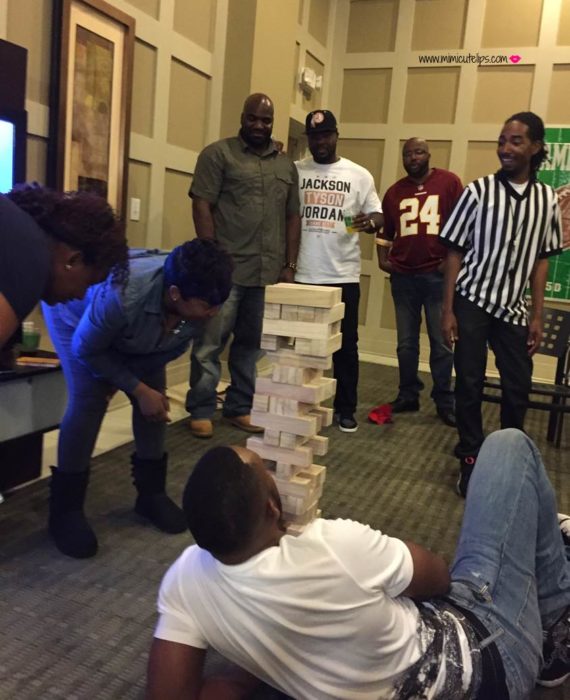 Because Jenga is so serious

If you thought Jeopardy got rowdy then you can’t even imagine the epic foolishness that took place during this Jenga came. Only ONE person is pulling the Jenga piece. Why is everyone else around you ask? Because we did the absolute most. We had so much fun we have to do this again.

Our Battle of the Sexes Game Night was epic. This is the most interactive Jumbo @jenga ever! ? #MimiCuteLips #gamenight #battleofthesexes #jenga

Big love to all of our guest, and At Home Store. Our event wouldn’t have been so amazing without you. #MyReason #AtHomeStores 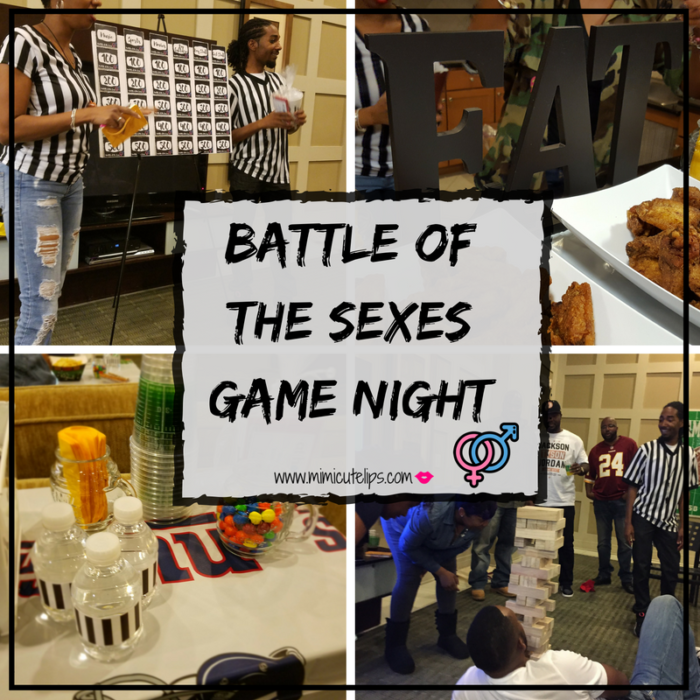 Click HERE to locate the nearest At Home Store and Download their app in the app store.

Also, don’t let the fun stop there! Carry on the games night by yourself by downloading things like dragonfish bingo to win some cash and have some well-deserved relaxation, after a day at work or a stressful day. A games night can be with friends or it can be by yourself, having some of your own game time! Just pick up your phone and download the apps!

What are your must have game night games? Chat with me in the comment below or FB, IG or Twitter.