Today was a day for the books. It was the first day of Kindergarten for LittleCuteLips. It was the first day my last child started school. It was a day that symbolized the coins I get to keep in my pocket because I no longer have to pay for daycare. Can I get a witness up in here? No, alright. Just know that I am rejoicing and crying at the same time. 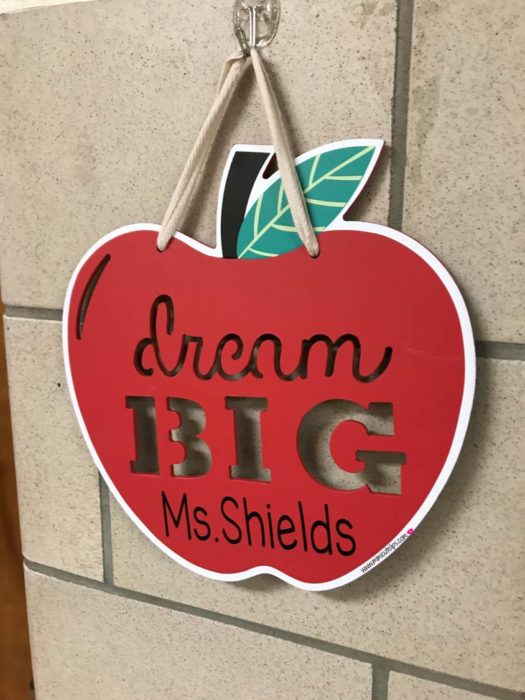 LittleCuteLips has been looking forward to starting school for a long time now. Her brother is in the 8th grade, and she has been jealous for years. We referred to daycare as school but her big brother would quickly remind her that it wasn’t “real school” well now she is officially in real school. I’m sure he will find a new reason to tease her but whateve. I’ve been getting her ready for this moment since her graduation. 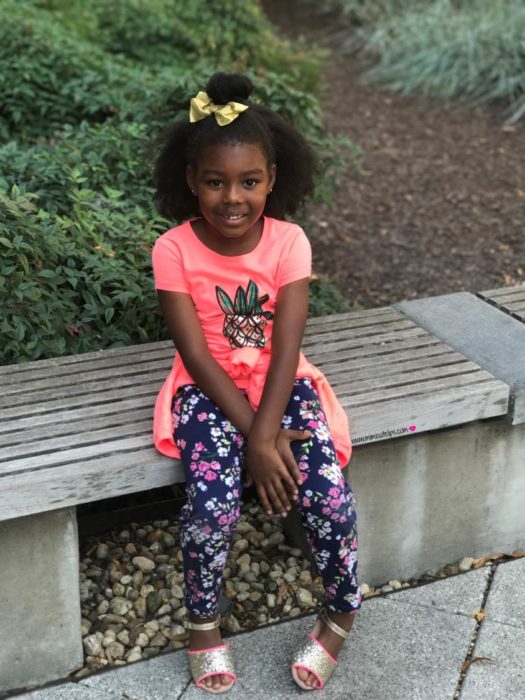 After taking the time to check over the league tables for primary school ratings in our area, we sat down and had a discussion about which school we would like her to go to. Of course, it was a no-brainer! Not long after we had this conversation, Babe and I took her to Orientation and she and I had really been looking forward to it. I let her hang out with me in the office for half the day, she had lunch, and we got on the train to meet up with Dad. This was the first time we would meet her teacher. We are familiar with the school because the ManChil went there, so I had a level of comfort this time around that didn’t exist when he started. She saw some of her classmates and they went over the rules. She even had a chance to test out her new seat. Unsurprisingly, she was even more excited than before. 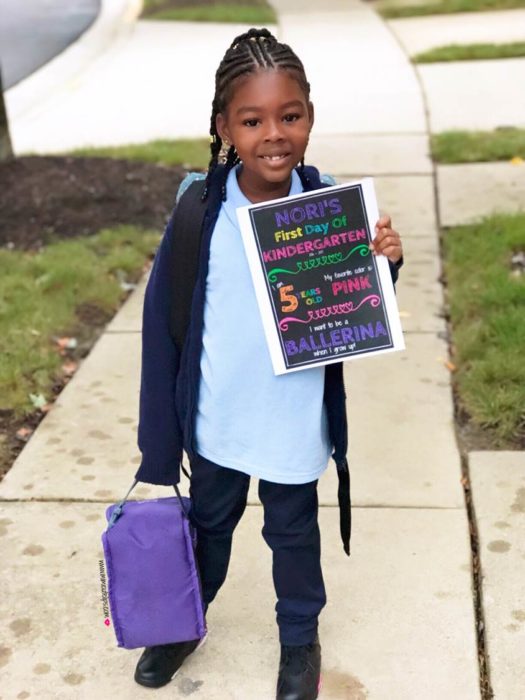 The big day had finally arrived. I managed the morning without anxiety and I was proud. I wasn’t sure how I would manage the tears but I would worry about that later. LittleCuteLips was really excited but over breakfast, that excitement turned into nervousness and manifested in a cry. My heart hurt… I know how she felt, I know she was excited but this was new and new can be scary sometimes. We had a great talk, lots of hugs, kisses, and reassurance. I made this sign for her because she just had to have one. Before getting out of the truck she asked for some peppermint oil to help calm her down. 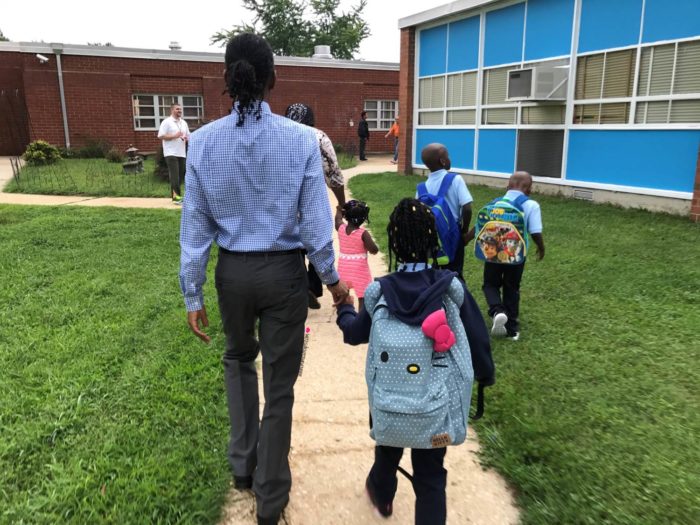 Babe dropped off big brother and met us at the school in time to walk to the building. She left me for him, that was a smart move. The school did a great job welcoming the students and parents. They played music, had a mascot and parents created a praise tunnel for the other kids almost like they do coming out of the tunnel of a football game. It was so dope. 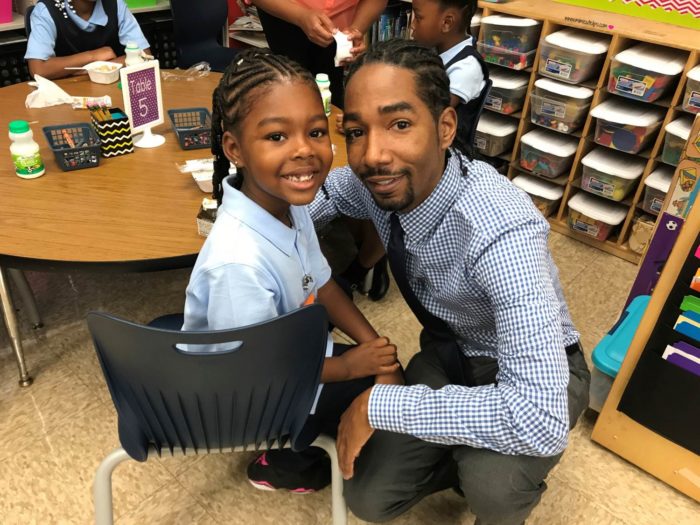 She was settled in her seat, she didn’t want the free breakfast they offered to her. However, she settled for orange juice though. She made sure Babe and I stayed close. 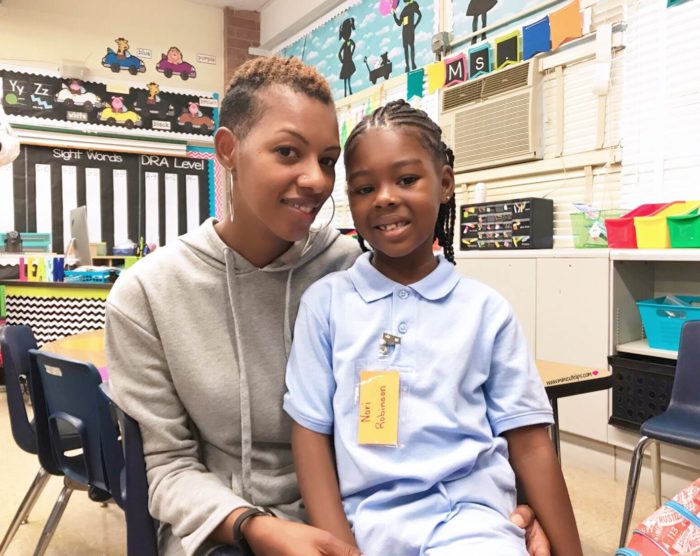 I’m protective of my kids but this one here more than ever. Her two front teeth have morphed into bunny teeth and they are wiggly and waiting to fall out. I can’t wait to have a snaggle tooth on my hands as it is a right of passage for Kindergarten. Our family dentist says that she takes such good care of her teeth and it makes me incredibly proud. As she’s starting to develop her own teeth now, it’s so important that she attends regular appointments to make sure the teeth are healthy and growing correctly. In fact one of our family members recently had some really bad issues with impacted canine teeth, so we’ve got our fingers crossed hoping that won’t affect her. The only thing we can do is keep taking her to the dentist to make sure those front teeth are aligning properly. She is such a big girl, but she is also my baby. One of her best friends who lives in California had to go for a check-up at a Dentist in Vista the other day so my little girl was giving her advice about what to expect because she had been before. It was very cute. Anyway, she seems to be growing into a lovely human. We are a bit co-dependent at times. She is just like me, which is a lot to raise. She and I are classic little sisters, she is 7 years younger than her brother and I am 6.5 years younger than my sister. Babe complains sometimes but I prayed for a baby girl and God gave me one that rocks my world. 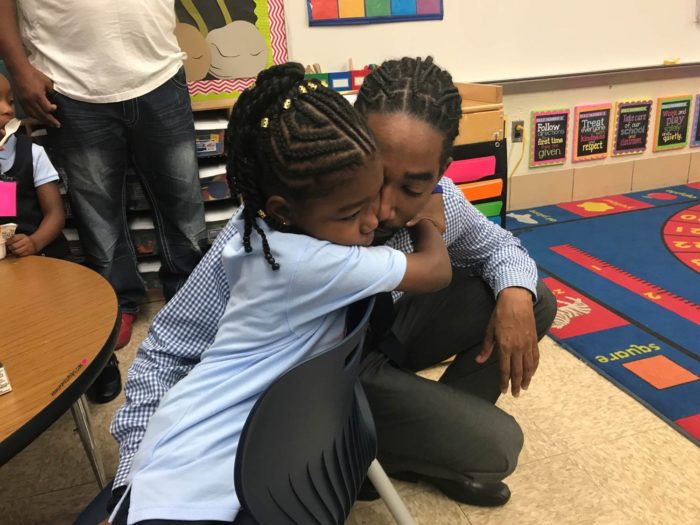 As we were getting ready to go LittleCuteLips eyes began to fill with tears. She swiped them away as they ran down her cheeks. She was excited, but she didn’t want us to go. The truth is I wasn’t exactly ready to let go either. This is my baby! She squeezed us tight and we hugged a bit longer. She had done so well, and shoot so had I. How could I leave this face? I couldn’t we walked towards the door and waited there a minute. 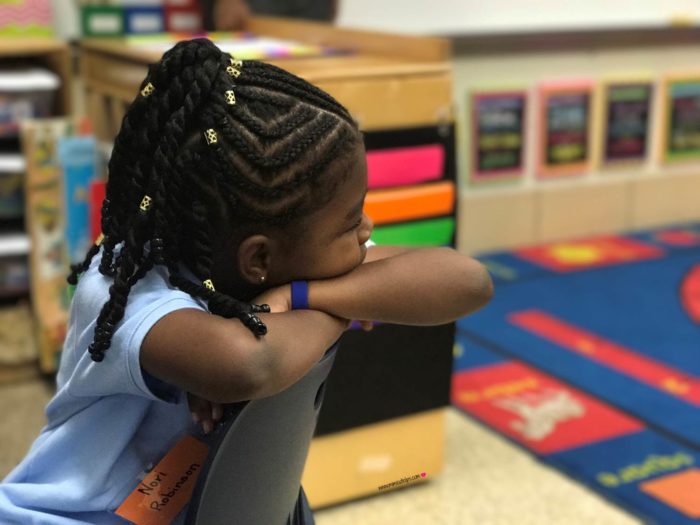 She was quiet and still but she was excited about the possibilities. 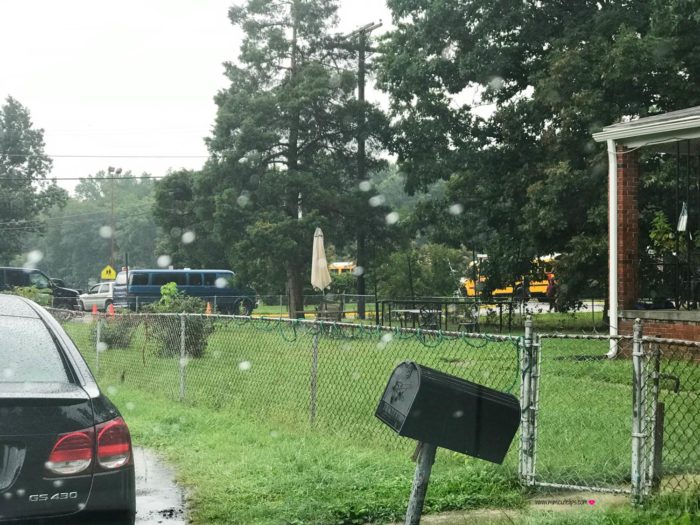 The day had come to an end and it was time for dismissal. You know the time when kids get dropped off at the wrong bus stop or put on the wrong bus. Not on my watch. I showed up at dismissal and stalked out the aftercare van. I was parked out of sight but I needed to see her come out of school and get in the proper aftercare van. Once that happened I went on with my day. The school didn’t know I was there, the aftercare didn’t know I was there and nor did LittleCuteLips. I’m happy to say that all systems were in place and now I can take comfort in knowing that the rest of the school year. Listen, the first day of school is the most chaotic.

I hope your big or little has an amazing school year. 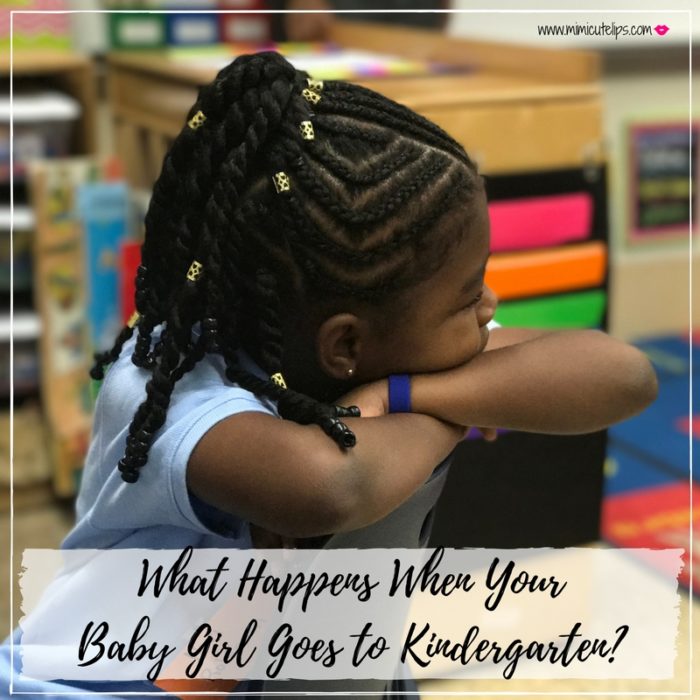 Did you check up on your kids? Have you had a scary back to school experience? Chat with me in the comments below or FB, IG, and Twitter.