I’ve not another #FatSnacks Friday for you. Today I’m sharing the things Babe and I ate while we were in New York attending Fashion Week and the Essence Street Style Block Party.  I didn’t have time to eat as much as I wanted. I missed breakfast two days in a row. My gut doesn’t show it, but I haven’t kept it 100% about my trip to New York, so I’m going to take the time to come clean.  On Friday, Babe and I went to visit Museum of Sex in New York. It was fun, it was hilarious and some lessons were learned believe it or not. They totally had the best moon bounce ever.  I’m still trying to decide if I’m going to share it. I just have to figure out how to share it so it isn’t offensive.

Prior to this adventure, we grabbed some lunch at John Doe. I selected this spot because we were hungry and it was a couple doors down from the museum.   I started out with a cocktail, because kid-less in New York. The menu said Sangria, the waitress said it was Sangria. Only it tastes nothing like Sangria. The coloring is off and it was so freaking strong I have a 2-inch patch of chest hair now. That ain’t cute… I wanted something good, but nothing that would make me miserable. I wanted to be full of energy while walking around the museum.  I went with the Chili Nachos: Fried corn tortilla chips topped with beef chili, pinto bean, Monterrey & cheddar cheese, with sour cream, guacamole & salsa. It was good, I totally couldn’t eat it all, but I worked in as much as I could. Babe decided to go with the Grilled Chicken Sandwich: with lettuce, tomato & onion in a Cajun dry rub, chipotle mayo, BBQ sauce on a baguette. he enjoyed it. Babe and I did a little shopping and people watched in Time Square until it started raining. We decided to grab some dinner to go. I took us to The Counter, I’d been their once three years ago with the girls.  This is a build your own burger type of establishment. They have a cute paper ordering system at the table. It was just as good to go as it was eating in house. I had taken Babe to a show for Fashion Week and then to the Essence Street Style Block Party in Brooklyn on Saturday.  He was so supportive and snapped pictures for me and everything. So after the block party, we went to Jane Motorcycles in Brooklyn.  This is in a very hipster party of Brooklyn. I didn’t even know that was a thing… the shop is so freaking dope, it is a motorcycle and expresso shop. After babe did some shopping we had two Stewart’s at the bar. He had Key Lime while I sipped on Cream Soda. 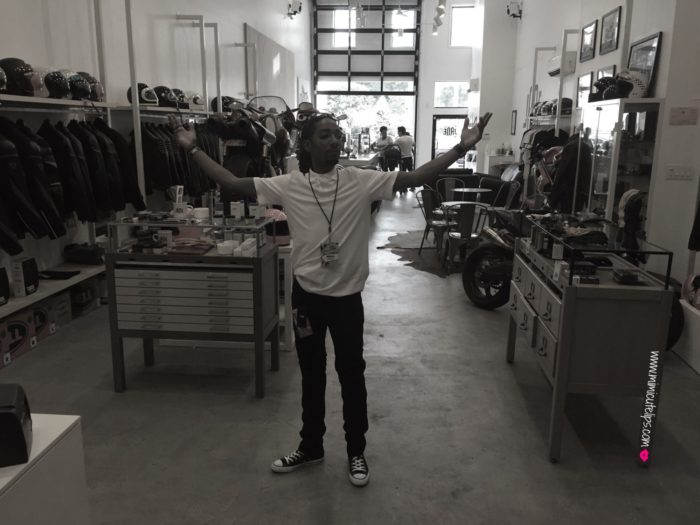 He was taking it all in while trying on a pair of motorcycle pants. The expresso counter is in the back left. You can see it a little over Babe’s shoulder. I heard such great things about Soco so I already knew that is where we were going for dinner. We walked from the motorcycle shop all the way to SoCo just following Google Maps.  The weather had cooled off a bit so our walk was comfortable. As we arrived at Soco the first thing I did was order me a Sangria, I’m happy to report it was the real deal.  Sangria, Sugarless w/ Fresh fruits, Lemongrass and thyme infused wine. He pretended to fall asleep while I snapped pictures of our food. He just wanted to eat. I got Aunt Cruz’s Mac & Cheese for us to share. Really because I’m just fat. Babe went with the Smoked BBQ Chicken, 1/2 Organic Chicken, Asian BBQ Sauce, String Beans, Mash Potatoes. He enjoyed it, the sauce had a little kick to it.  I hear their brunch is amazing, so I plan to return for that experience. Our first visit to New York was seven years ago, we came to celebrate my 30th birthday. We attended the last New York Giants game in the old stadium. #BigBlue #GMen Fashion Week was going on during that time as well. We came back several years later with the kids, but this is only our second time being here together. It was a nice full circle type of feeling. We had such a good time in New York and looking forward to doing it together again soon. Well, we might bring the kids the next time.