My week was filled school prep for the teen, returning to work after vacation and some really dope media opportunities. Boo was busy okay!  Tuesday night I attended the Multicultural Media Correspondents Association Dinner {MMCA} at the National Press Club, Washington, DC. This is an invitation-only dinner. I was honored to cover the red carpet and have a seat at the table with my people. 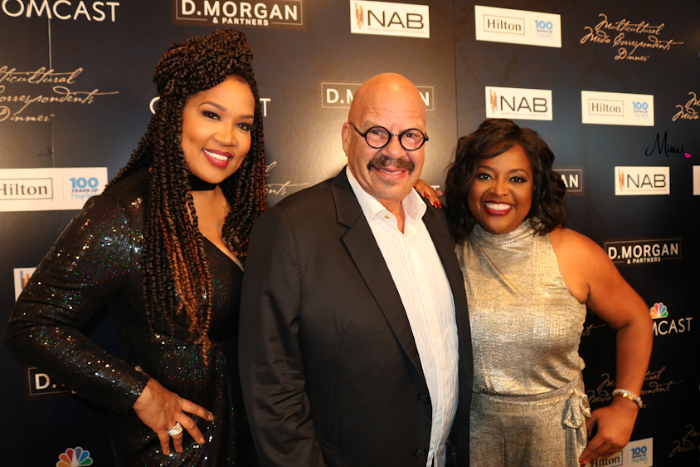 The 4th Multicultural Media Correspondents Association Dinner was a first for me and I had an amazing time.  It took place at the National Press Club, here in Washington, DC. Our hilarious host for the evening were actresses and comedians Kym Whitley and Sherri Shepherd, the exclusive gala is attended by media influencers, policymakers, executives, corporate and advocacy organization allies and Hollywood VIPs. It was a Who’s Who of media in all forms. 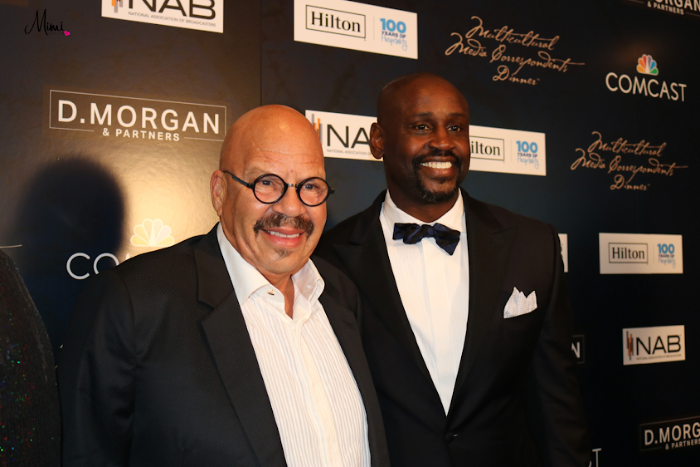 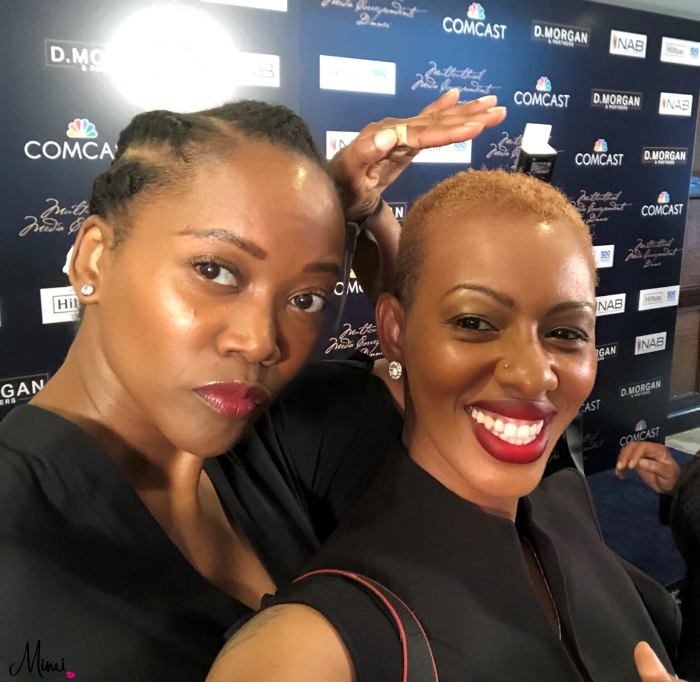 The one and only Erika Alexander AKA Maxine Shaw Attorney at Law AKA Cousin Pam from The Cosby Show hit the red carpet.  She is the Co-Founder of Color Farm Media. She is on both sides of the industry and lends her voice to move the needle forward in the media industry. Her personality is just as dope as you thought.

About The MMCA Dinner

The event honored the accomplishments of media industry legends and luminaries of color, including the following people: 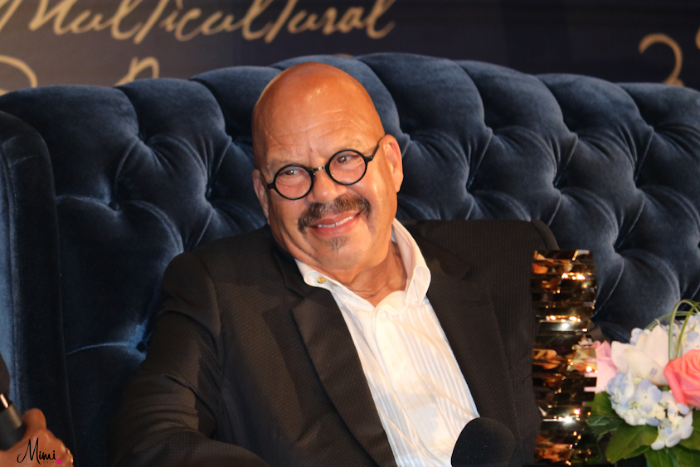 The 2019 Radio Broadcast Luminary awardee is Tom Joyner aka “The Fly Jock”. He is one of the hardest working men in radio. We all know the jingle to the Oh Oh Oh, its the Tom Joyner Morning Show. I also knew about his always sold-out Tom Joyner Fantastic Voyage Cruise. What I didn’t know was the real story about this legendary man who took over the radio airways. On tonight, I learned that story and it solidified why the MMCA bestowed such a gracious award upon him. So let me share it with you. 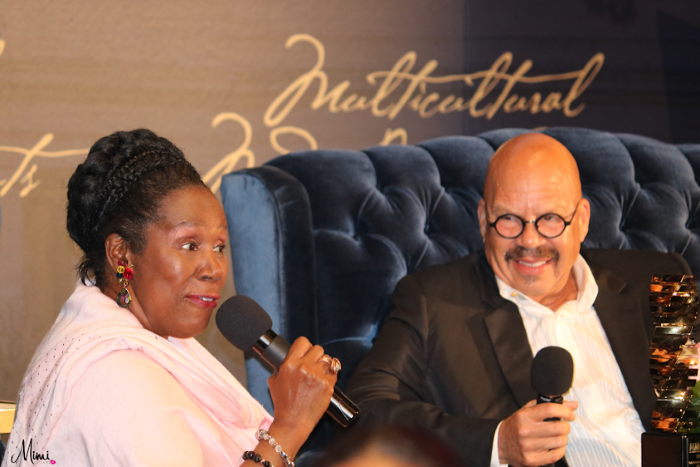 Rep. Sheila Jackson Lee (D-TX) presented him with his award and then they had a fireside chat so we could hear just how all of this came to be.

Sheila Jackson Lee is an American politician. She is currently the U.S. Representative for Texas’s 18th congressional district, currently serving in her 13th term in the House, having served since 1995. The district includes most of central Houston. She is a member of the Democratic Party.

Tom was born in Tuskegee, Alabama, and attended Tuskegee University which was Tuskegee Institute at the time. During the Tuskegee Boycott, which took place during the Montgomery Boycott, protests were held in the streets. While Tom didn’t protest per se he was in town while the protest was going on. A local radio station refused to play “black” music and the people protested. After giving in the station manager offered to let someone play “black” music on the station for an hour. Tom volunteered to be that person. That was how he got started in radio.

Wanting to take his radio career to the next level he left Alabama and ended up in Dallas. While there he also took on a job in Chicago, his dedication was strong okay.  Tom spent eight years doing his morning show in Dallas then flying to Chicago to do an afternoon show, and earned the nickname “Fly Jock”. In 1994, Tom would say yes to ABC Radio and become the first African-American to host a daily nationally syndicated radio program, the Tom Joyner Morning Show. His show would have more than 8 million listeners tuned it. WOW!

Tom’s grandparents were also HBCU alum and this shaped his commitment to HBCUs.  The Tom Joyner Foundation has raised millions for black colleges and even awards a high school senior a full-ride scholarship every year. I had no idea.  Tom has left an incredible legacy in radio and in the community.

The Tom Joyner Morning Show introduced listener favorite Rickey Smiley as the successor to the morning anchor position established by Tom over the course of 25 years. Joyner, who is retiring at the end of the year, acknowledged that Smiley has established himself as a trusted leader on-air and in the community with his current show, captivating audiences with his authentic humor but also his unique perspective on topics important to his audience. Smiley will broadcast out of the Dallas studios beginning January 2020.

Joyner reflected on his accomplishments and the future, “I’m happy to see the landscape of Urban AC morning radio continue to expand with Rickey, and I’m proud of the doors the Tom Joyner Morning Show opened. Twenty-five years ago, there was no template for a syndicated Urban radio show and we worked hard to prove that we could successfully produce and market a national platform that would entertain, inform and empower African-American listeners. We broke some ground, raised the bar for what audiences expected from Black radio all while partying with a purpose. Yeah, we’ve done a lot but there’s still a lot left to be done. I’m confident that Rickey’s activism along with his love for radio, the community, and HBCUs, will pick up where we left off.” 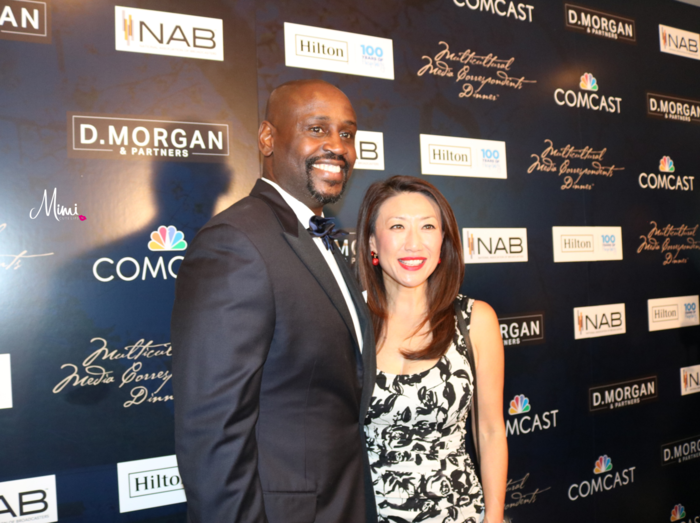 The 2019 TV Broadcast Journalist Award went to WRC-TV/NBC 4 news anchor and Emmy Award Winner Eun Yang.  Being from this area I grew up watching Eun on television in the morning. It was nice to hear about what she is doing in front of and behind the camera. She has been in the industry for years. She was one of the first reporters hired by the National Geographic Channel in Washington. It is dope to see homegrown folks stick around in the area.  She has also been recognized as one of DC’s 100 People to Watch and as one of DC’s Stars of Local TV News. 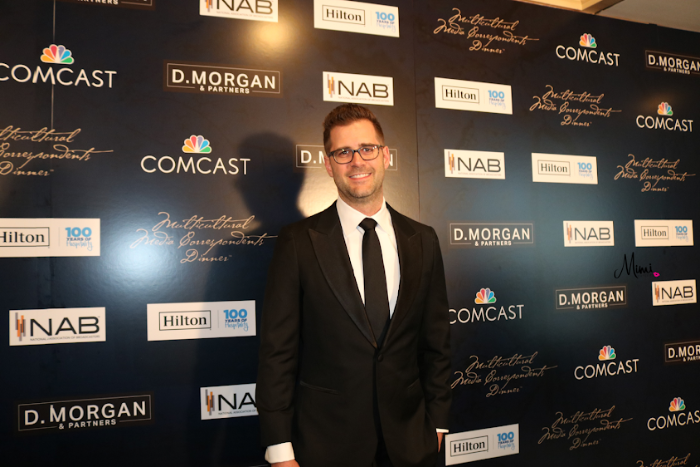 The 2019 5th Estate: New Media Owner award went to Parker Morse, CEO of H Code.  They are the #1 US Hispanic comScore entity for Authentic Hispanic Reach.  They connect highly sought-after US Hispanic audiences to brands.  Their goal is to assist brands in telling their stories through the Hispanic culture. 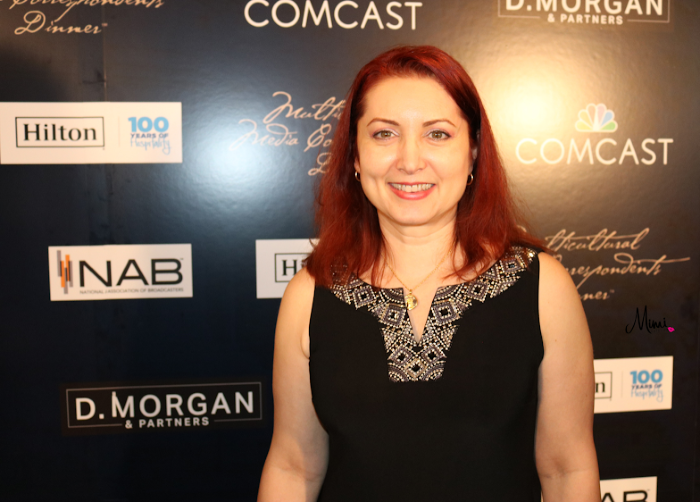 The 2019 Digital Media Journalist award went to Emmy Award winner Veronica Villafañe, Publisher of Media Moves. Veronica founded Media Moves in 2007 after noticing the lack of coverage of Latino journalists, media professionals, and Hispanic media in trade publications. The news site highlights moves and accomplishments of Latinos in the media and news about the industry.  They are turning footnotes into headlines.

The 2019 Congressional Champion award went to Congresswoman Val Demings (D-FL). She represents Florida’s 10th Congressional District in the U.S. House of Representatives.  Rep. Val started her career in Jacksonville as a social worker, she worked to protect foster children. She then dedicated 27-years to the Orlando Police Department (OPD). Rep. Val is a lifelong public servant who broke numerous glass ceilings in her rise through the Orlando Police Department and her election to Congress. 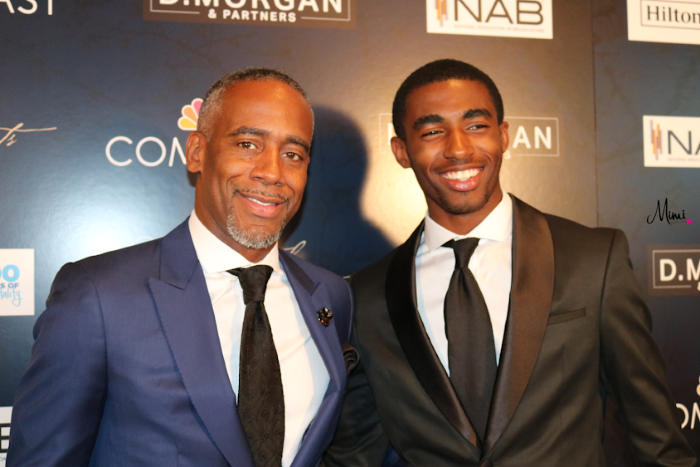 Jeff Johnson, affectionately known in the industry as Cousin Jeff, and his son hit the red carpet.  Jeff is the Teller of Stories, Developer of Messages, Architect of Social Solutions, International Ambassador of Cleveland, Creator, and Executive Producer of the Man Cave on BET. 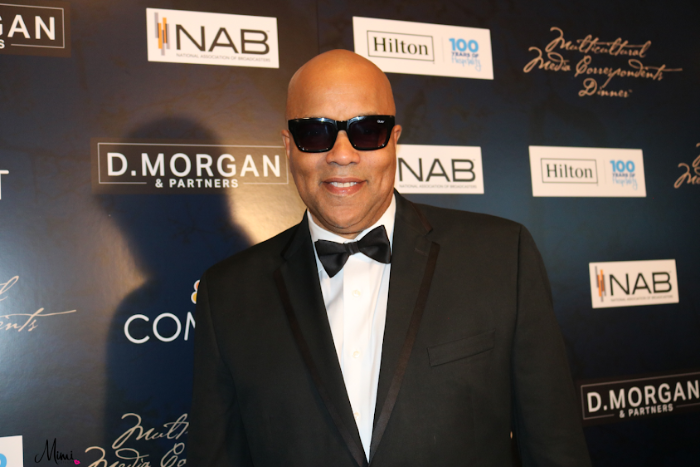 Kym’s brother Kyle Whitley also hit the carpet. They could pass for twins, they legit have the same face. 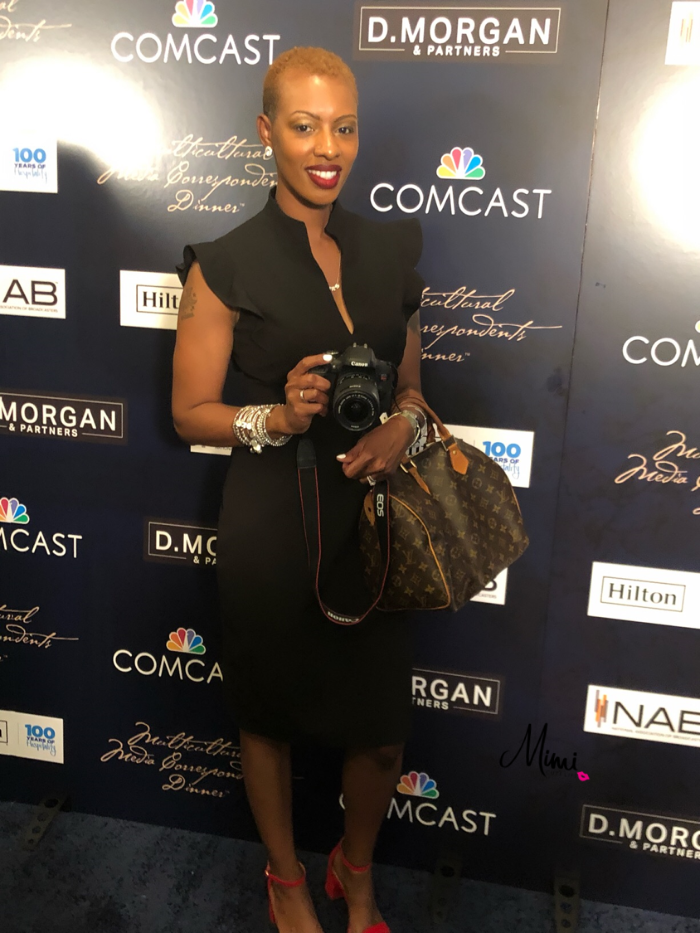 It was an incredible night mixing and mingling with amazing people. I look forward to working and supporting them in other capacities. Stay tuned! Chat with me in the comments below or FB, IG, and Twitter. 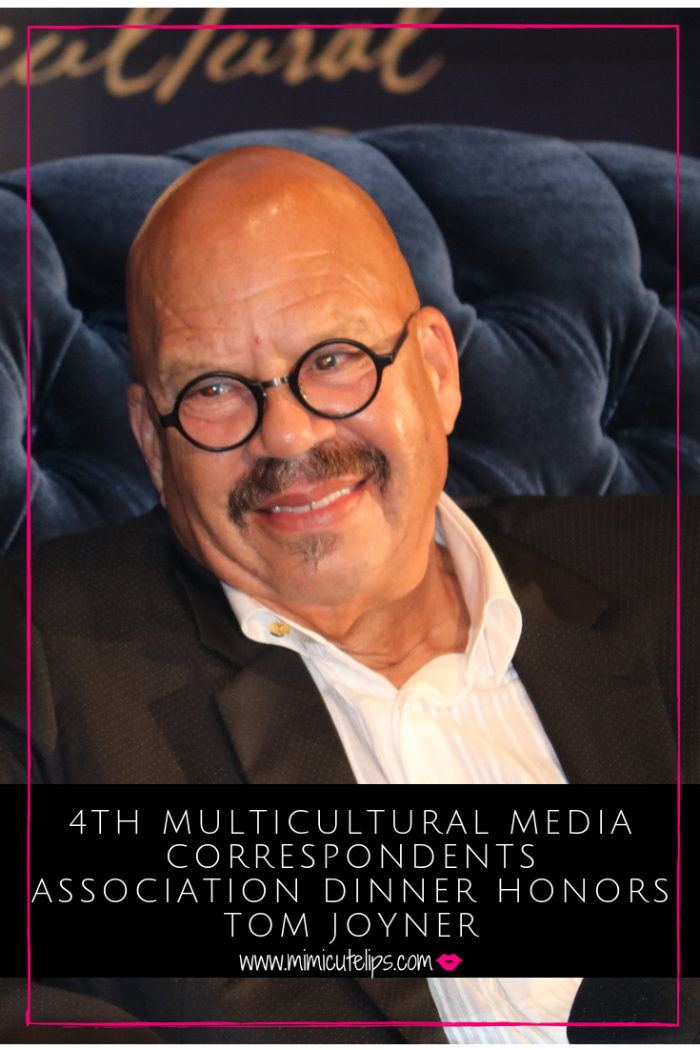