When I say Tuesday, June 14th was the most epic ever that is barely scratching the surface on what I mean. I watched my first born receive certificates for his academic excellence, we received a parent award and my kid say good-bye to Elementary School. I was proud, I’m sure I walked around with my chest poked out a bit. After his ceremony I high tailed it to the city. I’ve spent the past eight years wanting to be in the presence of the POTUS and the FLOTUS. Every year I try to get into the Easter Egg Roll and every year I get rejected. I’m an avid Target shopper and so is the FLOTUS but I’ve yet to see her at her favorite Target. 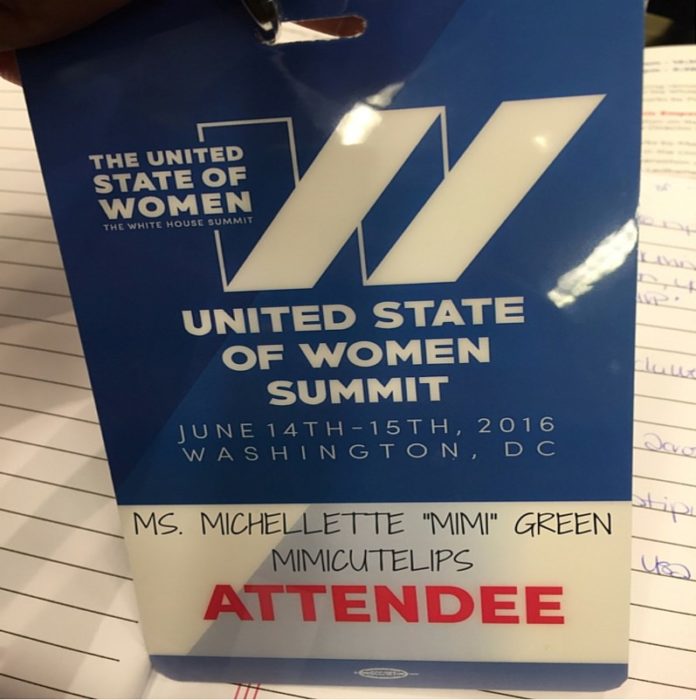 Let me take a couple of deep breaths and start from the beginning. Women from all around the world gathered at the Walter E. Convention Center in Washington, D.C. for the first-ever White House Summit on the United State of Women. This was a chance to celebrate our victories such as outlawing health insurance discrimination against women, to paid family leave and affordable childcare to raising the minimum wage to making sure every girl has the chance to go to school as well as college and career exploration. While those are great strides we still have a long way to go. Women are still discriminated against when it comes to parental leave and are also often subjected to harassment in the workplace. Luckily, the likes of the lawyers at Baird Quinn LLC are standing by to help defend anyone who has been mistreated in the workplace and will strive to get them the justice they deserve. 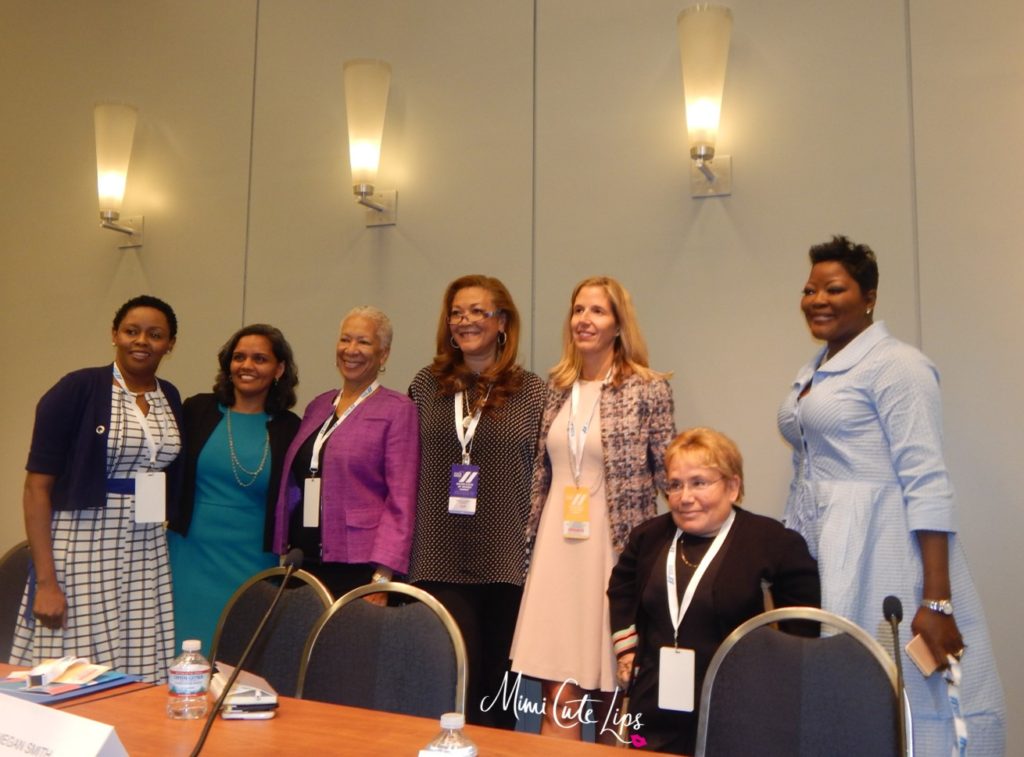 Obviously I missed the morning sessions because parenting but I arrived at noon just in time to sit in on Breaking the Cycle of Poverty: Economic Empowerment for Women and Families. It was a great discussion about various programs that can help women. The greatest issues women in poverty are facing and a personal story of how Wanda Durant overcame poverty. It was both sad and inspiring, sad that this is going on and inspiring because people are rolling up their sleeves to help. 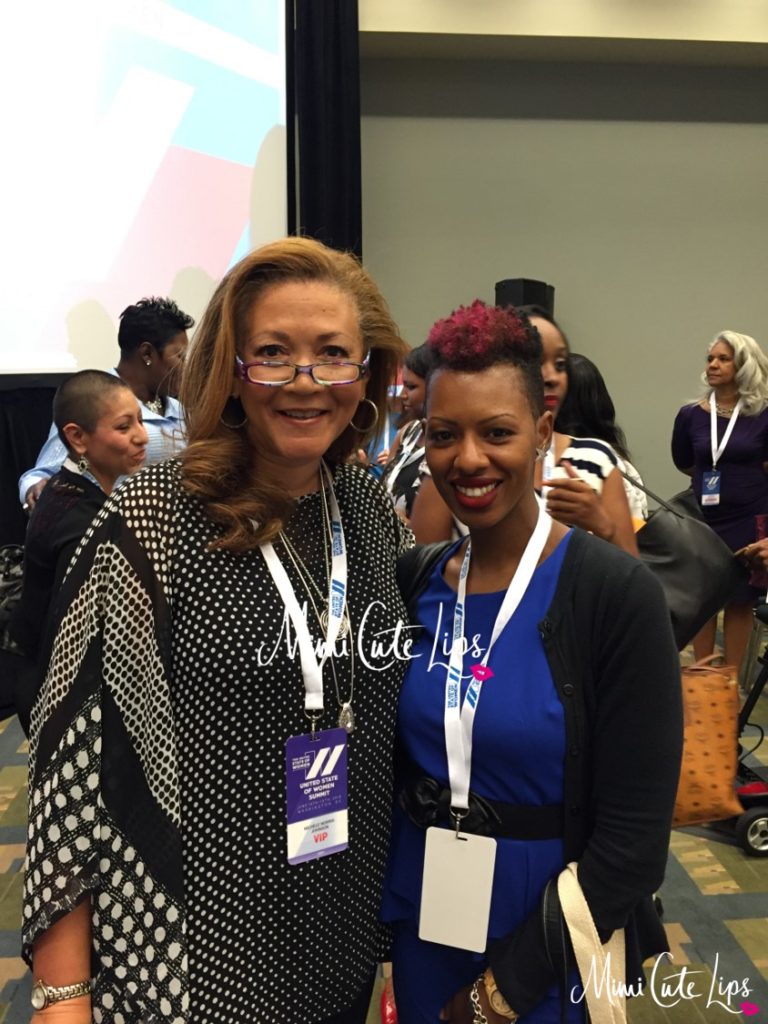 Her gorgeous daughter snapped this picture of us. 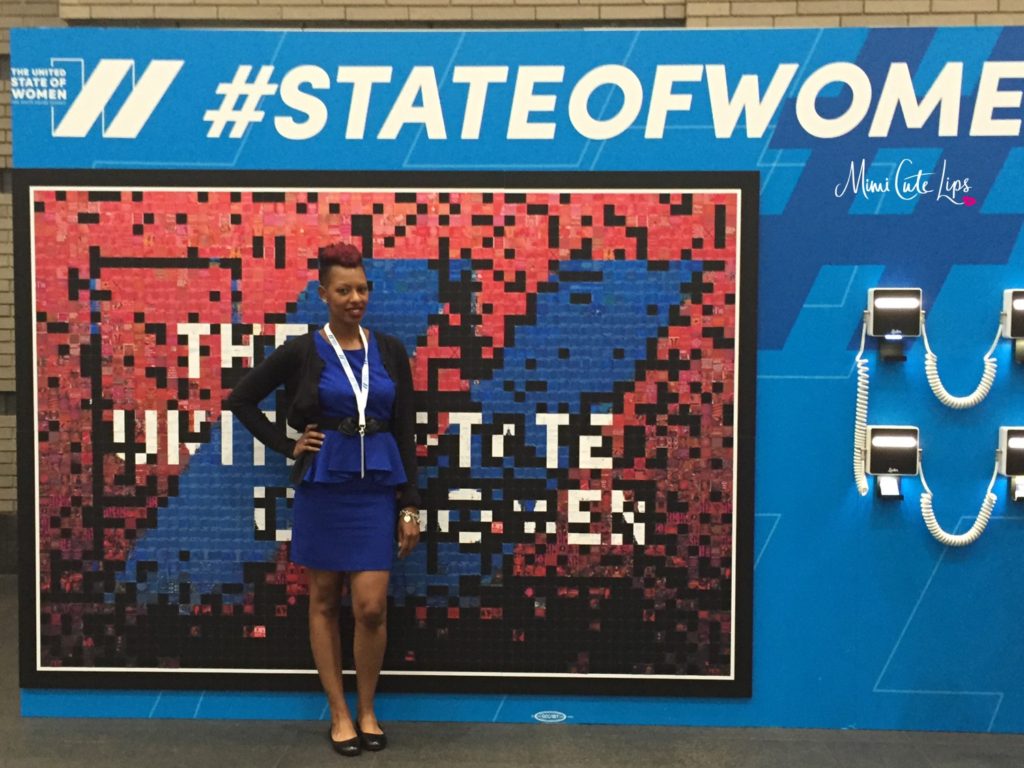 I don’t believe in flat dress shoes. If I’m going to be flat to the ground, I should be in Chuck Taylor’s. This is a rare occasion, I had to dig deep in my closet to find them. That wall I’m standing in-front of is made of tiny pictures. 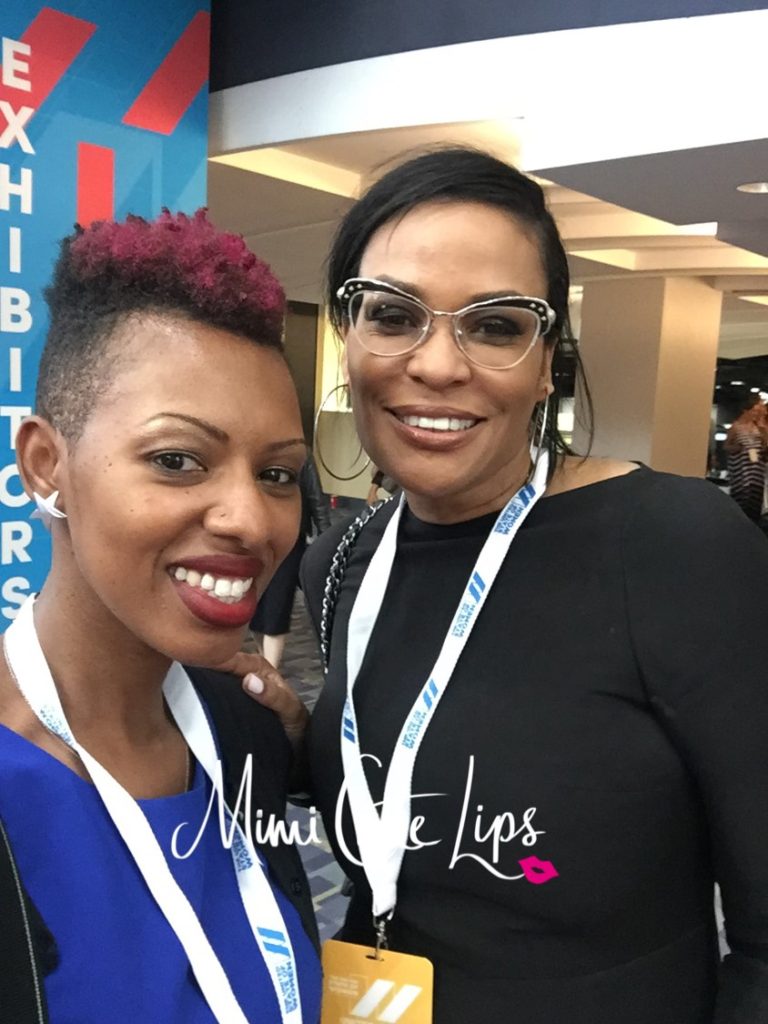 I ran into Beverly while walking the exhibit hall. I had met her a few months back at Macy’s Black History Event. We walked and chatted hand and hand, it was really cute. We shared a couple of laughs and then I noticed MC Lyte. 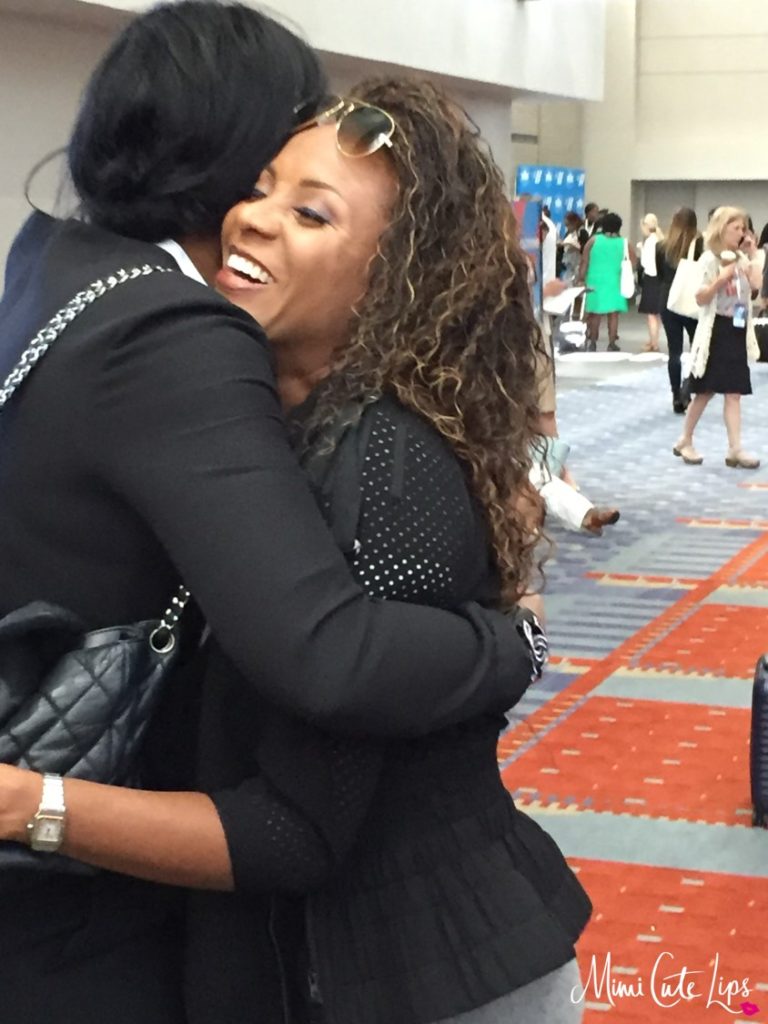 MC Lyte is a legit mentor in my head, for those of you in the cheap seats she is the first solo female rapper to release a full album back in the 80’s. She is from New York and she blew up during the time I also lived in New York. It was HUGE!!!! She has always been about the women’s movement and I love that. I was so into capturing their moment I didn’t even create one for myself. 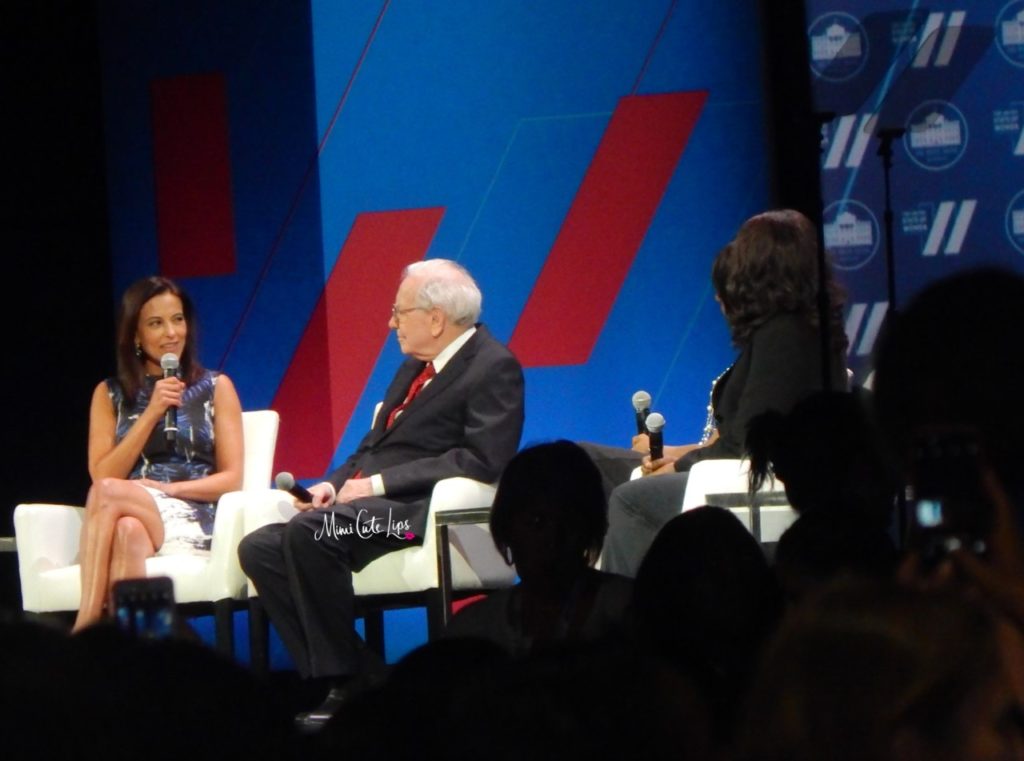 So then this happened, Warren Buffett, the most successful investor in the world {net worth 66.3 billion} and philanthropist. He was able to give women any advice that he might have for investing. A lot of people are currently considering investing, so he was able to answer any queries that the audience had. He suggested that people looking to become investors use a social trading platform to invest based on other people’s trading experiences. That was good advice, hopefully, more women can enjoy successful investments after hearing Warren talk. He was enjoyable and bit funny. “When asked why he considers himself “bullish” on women’s issues, he said he sees female involvement in the economy as key to the country’s prosperity. Without financially empowering women America would be “playing with one hand tied behind its back.“” This was a Conversation on Investing in Women with Goldman Sachs 10,000 Women and 10,000 Small Businesses Graduates. 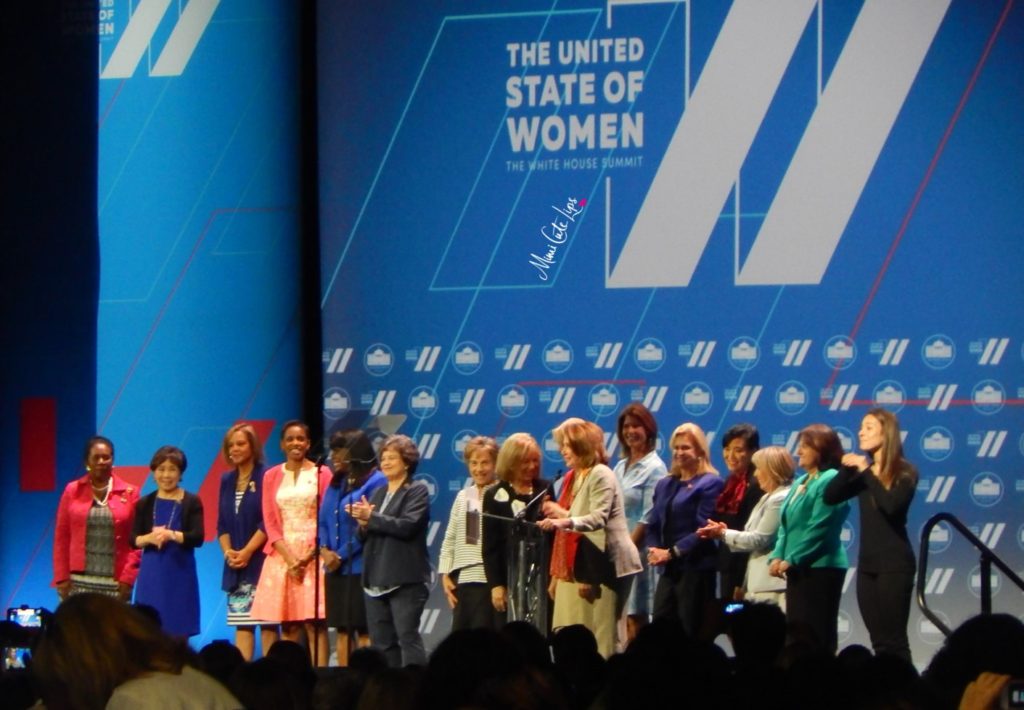 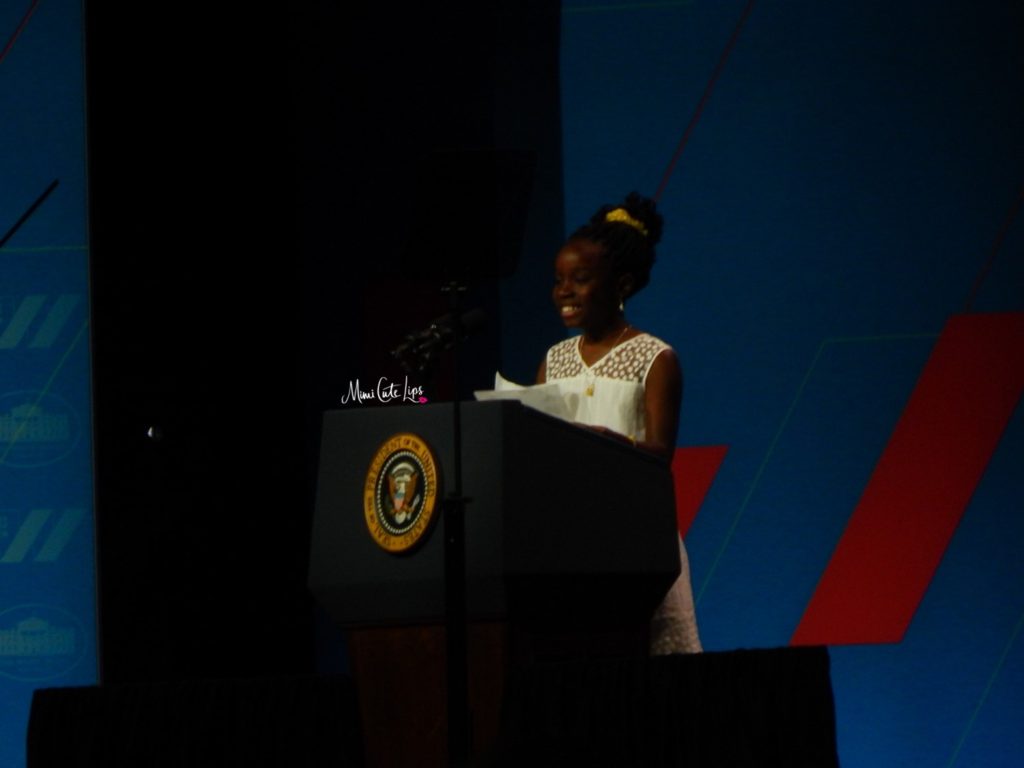 Mikaila Ulmer, Founder & CEO, Me and the Bees Lemonade

I am such a fan of Mikaila, since I heard about her business. At the time she was only nine years old but I wanted to support her. I purchased a case of her lemonade and shared this picture on social media two years ago. Mikaila Ulmer is such an inspiring entrepreneur of “Me and the Bees Lemonade” {formerly Bee Sweet}. Earlier this year she appeared on the television series “Shark Tank,” and totally got a deal with Whole Foods. She’s really pushing her business in all of the right directions to ensure it remains successful. She makes use of social media, promoting her brand whenever she can to her ever-increasing audiences, which is one of the best ways to grow a business. For any other aspiring entrepreneurs, it might be worth using social media as much as possible to ensure that the business gains more visibility. Perhaps businesses should consider using Twitter to keep in contact with customers. To grow a Twitter account, people can always visit https://www.twesocial.com/tweepi-alternative/ to gain more followers. Hopefully, more businesses will be able to have the same opportunities as Mikaila. She gave the President a very gracious introduction.

When I say the room erupted in cheers, it was so freaking loud you couldn’t hear your own thoughts. This man’s energy and presence is so freaking electric I won’t ever forget that moment. The feeling, the energy the sheer elation. Like him or not you will respect him, PERIOD POINT BLANK! I’ve waited 8 years for this moment, now I wanted it to happen at the White House but I’ve not made it their yet. But, I made it here! I WAS HERE, in the same room with the PRESIDENT OF THE UNITED STATES OF AMERICA, sharing the same air. 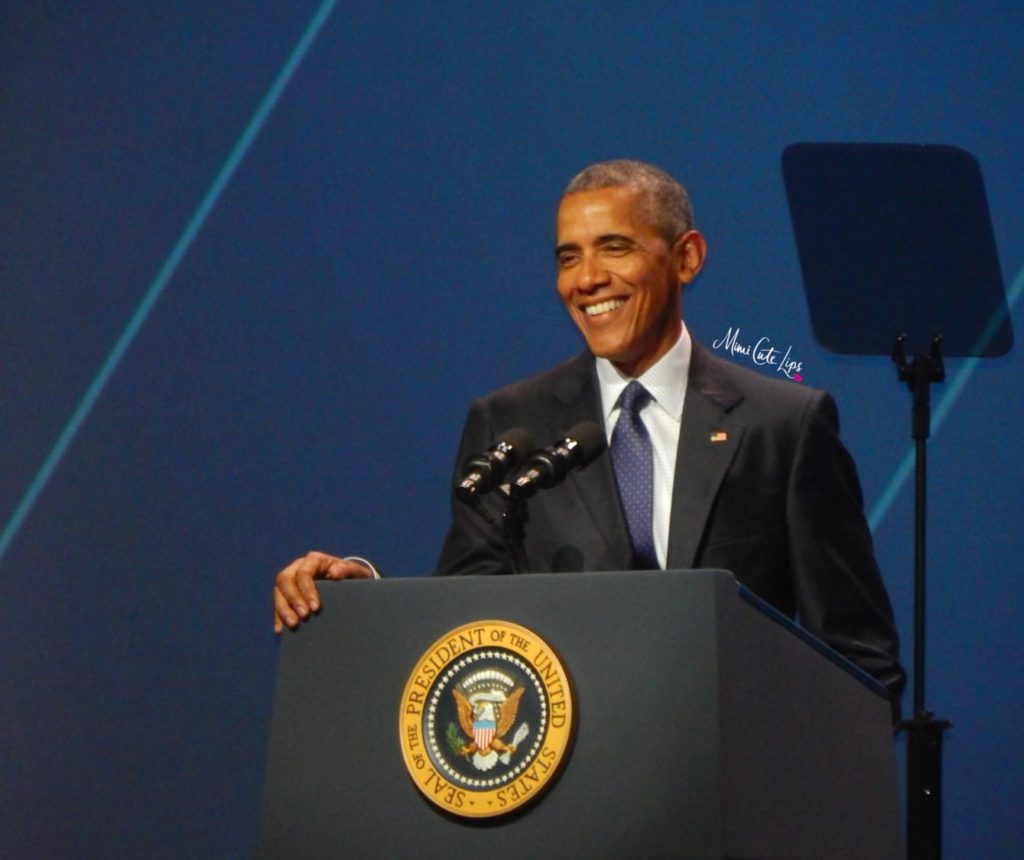 POTUS had all kinds of amazing things to say, instead of trying to capture them in text I included the video below.

This is from the White House FB page. 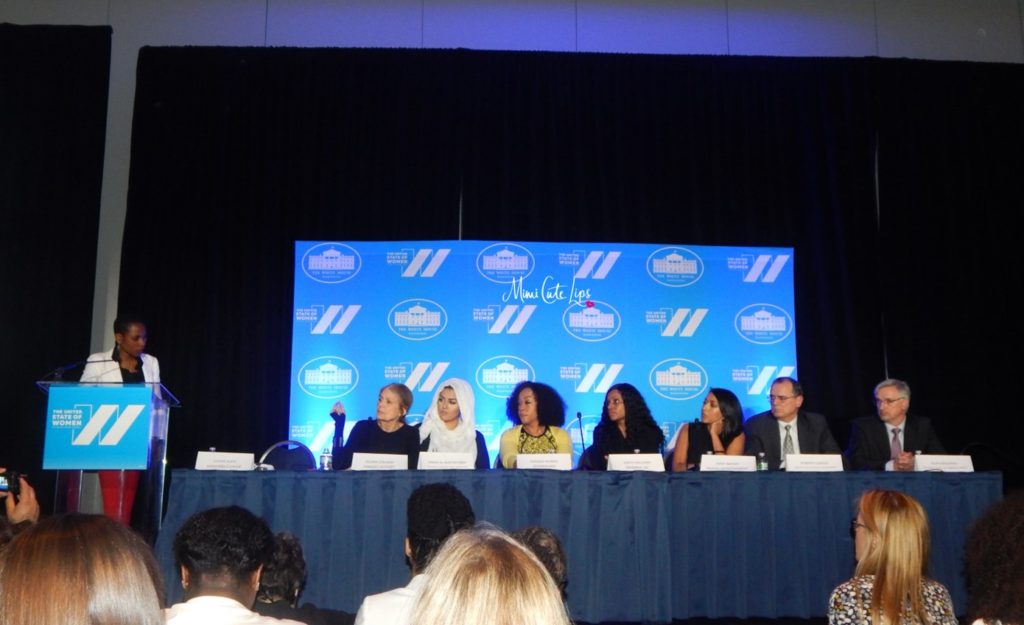 I was all kinds of excited about this panel. It was titled “Reel Change: Advancing Equity and Opportunity in Media” and it featured some of the dopest people in the industry. My favorite blogger Luvvie Ajayi (Awesomely Luvvie) ran the show. The list of rock stars includes: #1 Feminist Gloria Steinem, Amani Al-Khatahtbeh (MuslimGirl.net), Queen of Thursday Night Shonda Rhimes, Judith Williams (DropBox), Sana Amanat (Marvel) and Glen Mazzara (Writers Guild of America). I told you they covered all the industry areas. Click HERE to listen to the discussion.

The conversations were good, it was productive, it addressed the areas that still need improvement but great to know that they are doing their part to make a change. If you want to do your part DO NOT SUPPORT THINGS YOU DON’T LIKE. TALK WITH YOUR MONEY. The industry makes what people will watch and support. If you aren’t watching and buying they will stop making it. Just as simple as that. You have power, collectively we have even more power, use your power responsibly. If you don’t like it stop sharing it on FB and other social media only increasing the views. 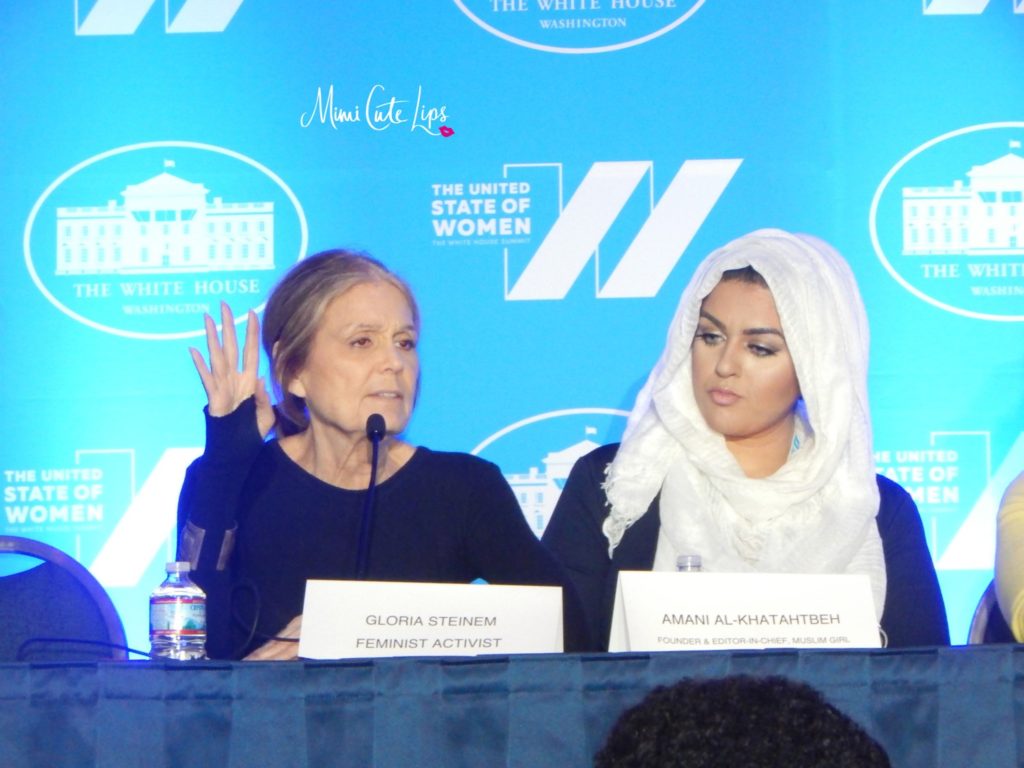 Amani is a young 24-year-old lady but she is killing the game. She is blazing a path for the Muslim community. She is shedding light, changing views and doing so apologetically. YES, GIRL! 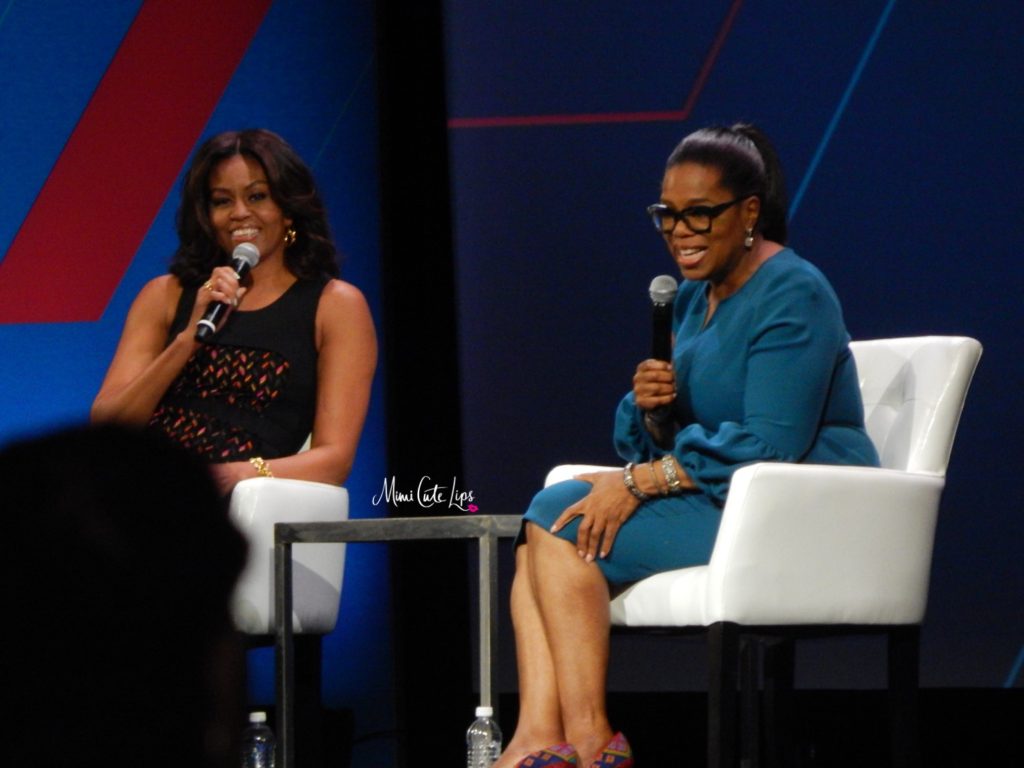 There were three people that I wanted to see the MOST and these two ladies were two out of the three. I love everything about them, they own who they are, they give back, they reach back and help others. As amazing as they are and all that they’ve accomplished they are still striving to do more. I felt like I was in their sitting in on their regular girl chat. It was that comfortable and relaxed.

Catch all this good girl chat right here!
One of the things the FLOTUS is looking forward to after the presidency is simply going to Target. As she and Oprah girl chatted it up they dropped a lot of jewels that I happily picked up. At one point the FLOTUS said that if you don’t prioritize your time people will gobble up your time. I’m sure even the average person understands what she means. If you don’t teach people how to treat you, they will treat you any kind of way. That takes me to another point she made, to know your value. I’ve grown to know my value but I must admit, it took me years and I’ve still not perfected it. I am working on it though. Another great tip was to surround yourself with goodness, with people who uplift you and hold you up. My mom always told me “association brings on assimilation” I hated it as a kid but boy was she right.

The blogger in me loves the fact that FLOTUS said success and good work is the best revenge; there is no need to acknowledge the haters. AMEN! I get so tired of people making FB declarations and such about their haters. Shut up already! Another jewel that I’ve always treasured is authenticity. The First lady said people can smell in-authenticity; people know when you are not what you appear to be. Enough said!

In closing Oprah said to the First Lady “You make me proud to spell my name W-O-M-A-N.” Oprah was channeling the words of the late Maya Angelou. 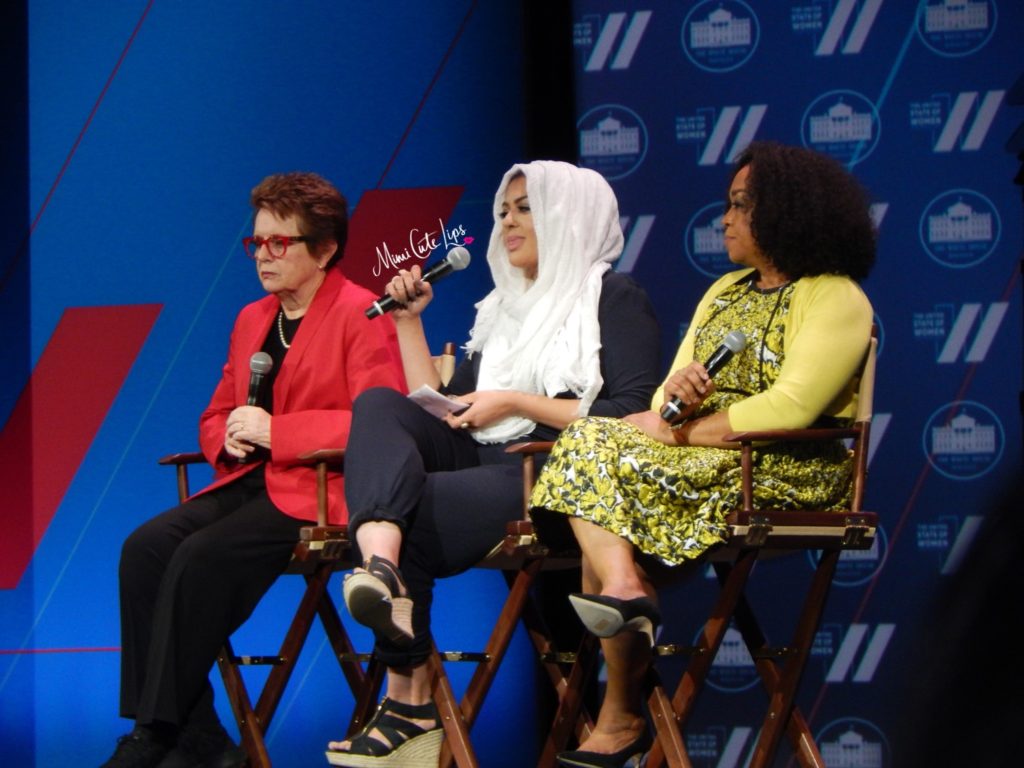 Legendary tennis player Billie Jean King took the stage. I must admit I didn’t know much about her so here is a tidbit; she is the former No. 1 professional tennis player in the world; she has won 39 Grand Slams. Amani moderated the chat with Billie and Shonda. This makes the second time I’ve seen Shonda; she is still magical. The first time was when she and the cast of Scandal came to DC. 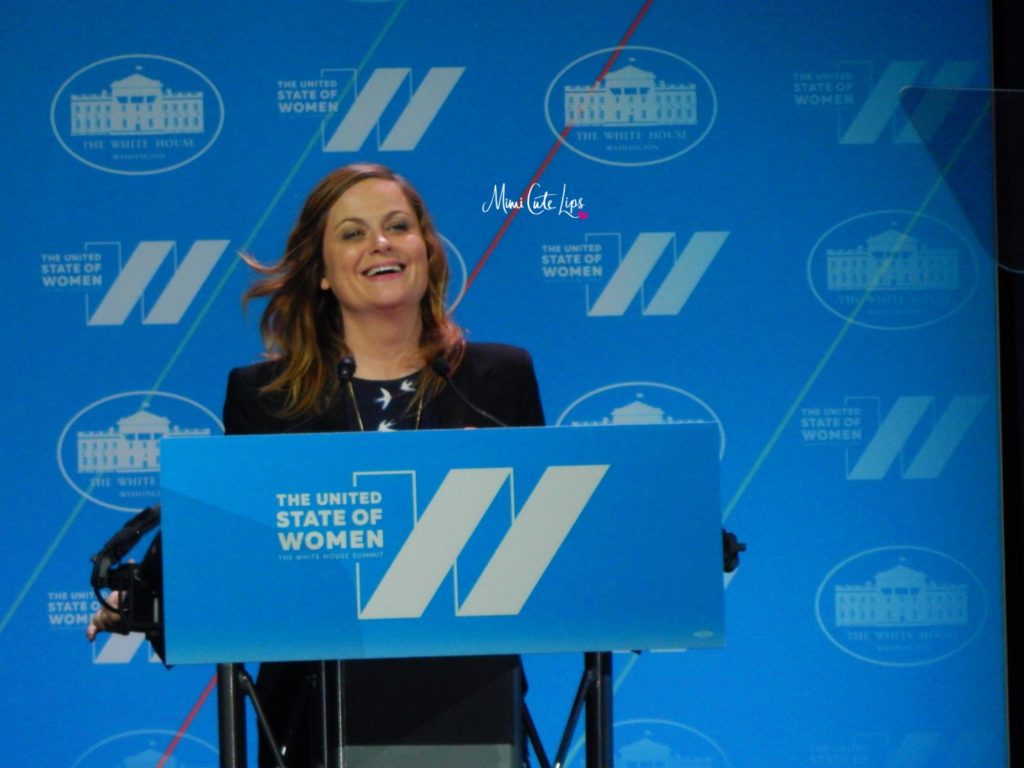 I was really excited to see Amy as well. Her movie Baby Mama with Tina Fey is one of my favorite movies of all times. No seriously, I’m sure I quote that movie in everyday life more than any other movie. If you don’t know her then I’m sorry; she was on/in SNL, Parks & Rec, Sisters, Anchor Man 2 and a bunch of other things. She also voiced a character on Inside Out & both of the Alvin & The Chipmunks movies. She is amazing, she also has her own non-profit titled Amy Poehler’s Smart Girls.

The day was amazing, so much so that I couldn’t share everything. It is a day that I will never, ever forget. I’m so proud and honored to have my face in the place. Shout out to my BFF C. L Rice; she is the real MVP. 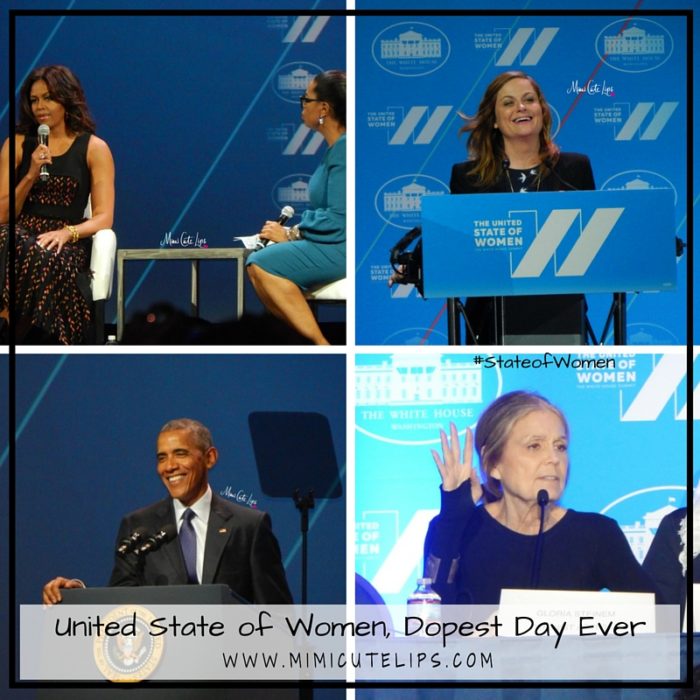 Did you watch live or see the footage on social media or the news? Chat with me in the comment below or FB, IG or Twitter.