I’m back home from Key West & Miami; I still have unpacking to do and pictures to sort and so we will dish on that later in the week. Instead, I have a story to share with you; one day I’m on social media like always and I come across a dope story about a little boy. When you see stories, they are just that stories. You don’t know the person, and you don’t have a connection to the story; you just read maybe share and you keep it pushing. Well, this time, was different. I knew this kid, I knew his parents and have known them for some time.

In our society people go viral for a lot of things and a lot of times those things aren’t something to be proud of. I’m happy to say this one is a feel good story. You already know September is Childhood Cancer Awareness Month.

The timing of this story was perfect. Although we only have two more days left in the month, don’t get it twisted, the message will go on. This all started with a tweet so it appears. A supportive Auntie tweeted a picture of her nephew’s hair before and post haircut and mentioned that he donated it to kids with cancer. And just like that it went viral. {Note: 62,016 Retweets & 121, 928 Likes}

Some of the articles.

Can you imagine being a ten-year-old and going viral? I bet on instagram, he would have got so many free followers. This story has been shared on NBC Washington, Fox 5 DC, Buzzfeed UK, Twitter Mentions Homepage, Comedian Ricky Smiley and more… There are at least 70 different articles that have been written about Thomas and at least 3 videos. This story has even been featured in other countries. The real journey started two years ago when Thomas saw a video his Mom was watching of Kyssi Andrews. Kyssi was a little girl battling cancer and her hair had fallen out as a result of her chemo treatment. Thomas thought she was a boy because she didn’t have any hair, and his Mom explained what cancer is and how the treatment affects your body. At that very moment, Thomas decided to grow out his hair for Kyssi and donate it to kids with cancer so they can have beautiful wigs made. Backstory: Kyssi was diagnosed {2012} with a rare cancer called Wilm’s Tumor; a kidney cancer at the age of 3. At the age of 6 Kyssi Andrews {2015} received her wings. During her battle, Kyssi’s mom maintained a Facebook page giving updates. The world was sucked into the life of this adorable little girl fighting for her life as we cheered her on virtually. Despite Kyssi’s passing Thomas continued to grow his hair out. Rumor has it he is tender headed and didn’t like to get his hair combed. Braiding his hair up made it easier for him to be the busy 10-year-old boy that he is. I had to ask Thomas and his Mom Angelia about this incredible journey. All of that hair was enough for 3 wigs.

Did you ever think your story would go viral? No, I had no idea.

What has the experience been like for you and your family? Well, it’s a lot of interviews and people really like to hear the story. We got to fly to Chicago and meet a lot of people.

What do the kids at school think of this now that you’ve been on the news and you are going to be on a talk show? They think it’s cool. My friends said they saw me on the news and twitter. They didn’t know why I was growing my hair but they said I did a nice thing.

What advice would you give kids that want to give back but don’t think they are big enough to make a difference? Any little thing you can do to help other people is big. Nobody is too small. Everyone can make a difference.

Have you been able to speak to Kyssi’s Mom since your haircut? Yes, and I know my mom talks to her a lot on the phone. She was nice. As the articles began to pop up all over the place Steve Harvey also shared the story and the family flew out to not just meet him, but to be on his show.

How was it meeting Steve Harvey? It was fun, but it was a little bit scary talking in front of a lot of people.

What has been the best part of all of this? Meeting Steve Harvey and getting on a plane

The actual air date for the Steve Harvey feature isn’t known at this time but it will air within the next two weeks. As a Mom I had to know what his Mom and siblings think of all of this.

Now that the story has gone viral, what are you most proud of? I’m mostly just proud of the fact that he picked up empathy and compassion for other people. He will literally give you the hair off his head and the shirt off his back.

What do you want other kids to take away from Thomas’ act of kindness? I guess that being selfless, and doing for others is such a good feeling. You never know how much your one act of kindness can inspire and move someone else.

What do his siblings {older brother & little sister} think about all of this stardom? His big brother is happy for him. At first, his sister thought everything Thomas wouldn’t do for her was because he was on TV. “Thomas won’t help me wash dishes because he’s on TV…” or “I asked Thomas to help me fold my clothes but since he’s on the TV now he doesn’t like to help anymore” LOL… he’s like, “No! I still don’t want to fold your clothes for you; it has nothing to do with being on TV!” Lol… she really was upset at first, but she’s calmed down with all that drama.

LISTEN!!! I am the classic little sister and I loved every single word of his little sister’s shade. There is nothing like family to remind you of who you really are. hahaha I would so do this to my sister, but I love that she has come around and it proud of her big brother.

How can you help? You can donate to St. Jude.

You can donate blood. 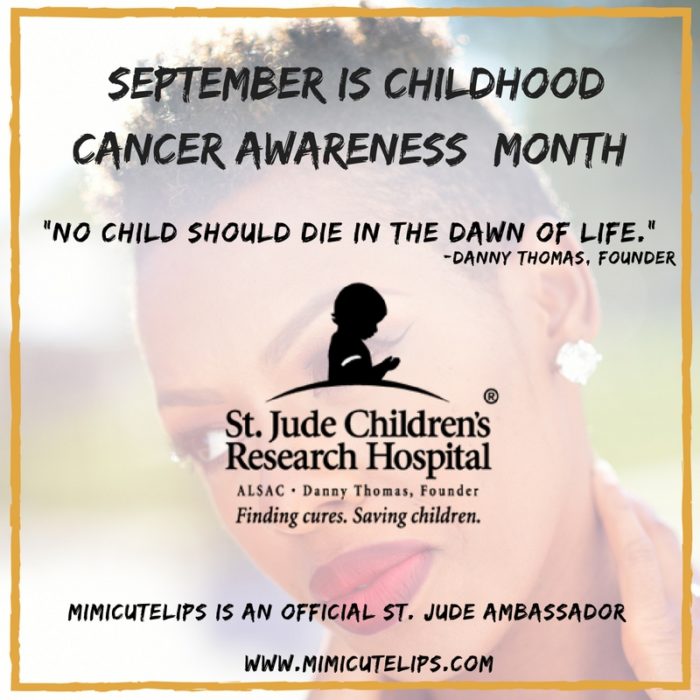 Would you grow your hair out, cute and done it for cancer? Chat with me in the comment below or FB, IG or Twitter.