Did you watch the dry Superbowl 50? Were you mad that Cam didn’t win? Did you think it was rigged for Petyon? Are you like I don’t even know who those people are because Beyonce showed up and showed out? I loved the Bruno & Beyonce battle dance. Beyonce broke the internet this Saturday when she released her new song/video of Formation. If that wasn’t enough she performed during the Half Time show and announced her Formation tour at the same dam time. Her marketing skills are on 1,000.

I am happy to report your girl has added another gig to her resume. I am an official lifestyle correspondent for KMW Exclusive; they are an entertainment blog. My first assignment was a really dope one. I had the honor and pleasure of covering the D.C. red carpet and move screening last week as media. Talk about geeked! The event took place at the Newseum downtown and it was the bomb backdrop to such a dope event. This was my first time at the Newseum so I was really looking forward to it. It is one of the rather new-ish museums in DC and it cost a bit more than the usual Smithsonian museums that most tourist frequent. Ticket Prices: Adult $22.95 – Kids age 7-18 $13.95 – Under 6 FREE 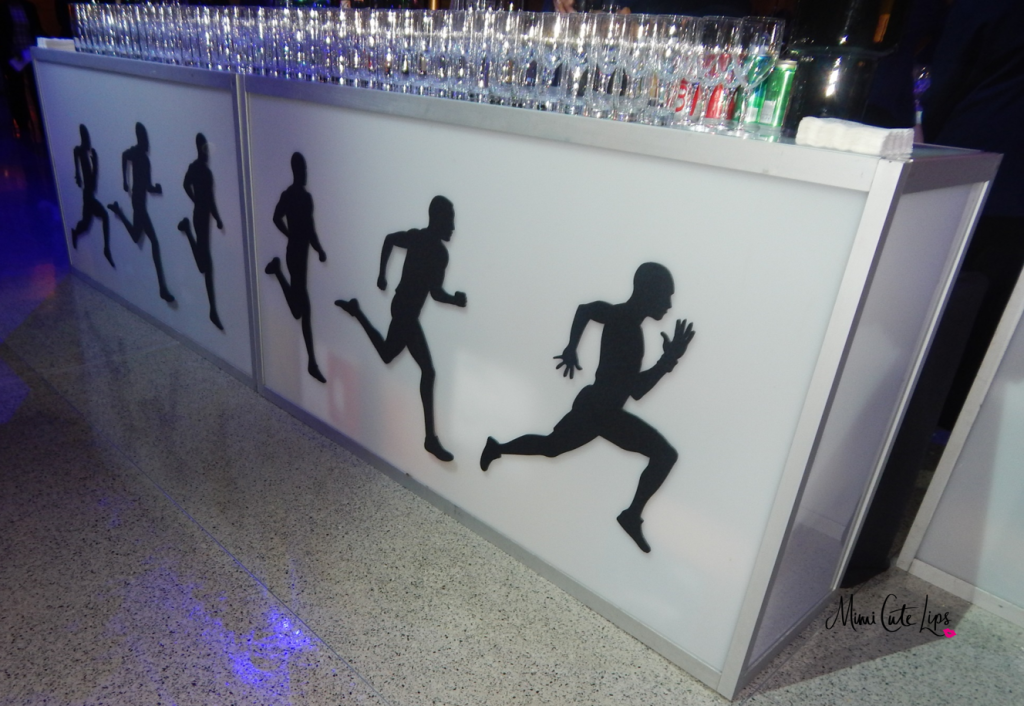 I love good attention to detail; from the race positions on the bar to the “red carpet” grass and track lanes. 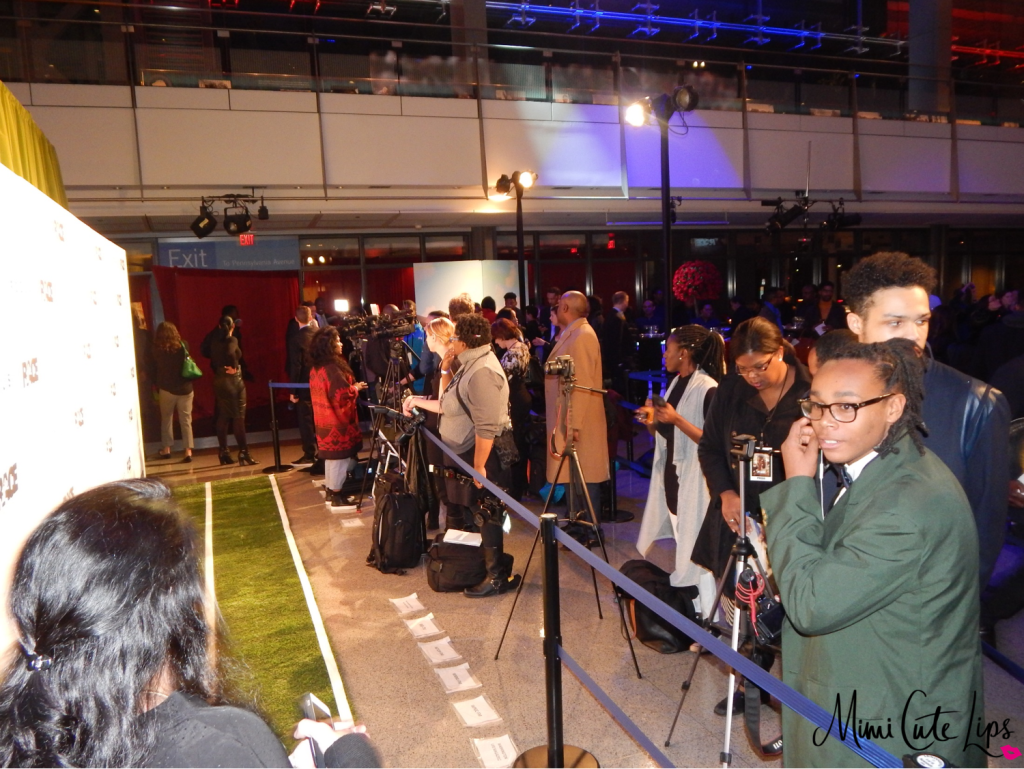 This is the media area, news outlets such as CBS, to the most popular radio stations, to bloggers and writers/reporters were in attendance to screen and talk to the actor of Race, Jesse Owens Movie. 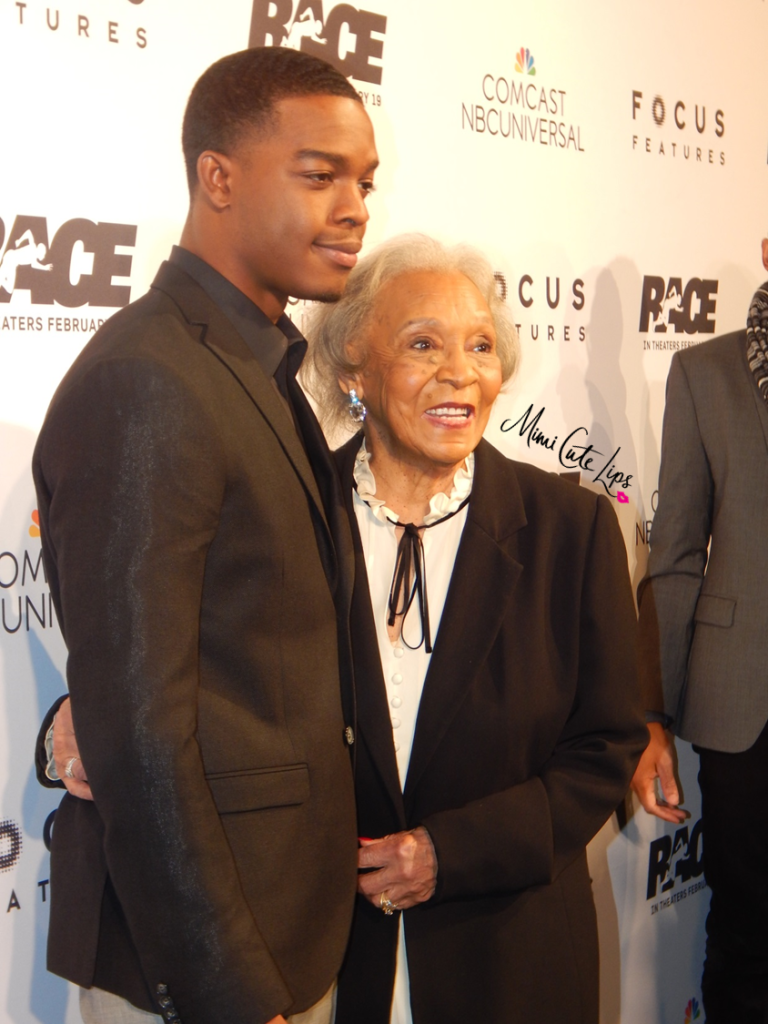 Stephan James spent a lot of time with the daughters of Jesse Owens. Gloria {pictured above} is depicted in the movie. Who is this Stephan {Steph-Fan} James?  He is a 22-year-old Canadian actor.  You may recognize him from Ava DuVernay’s Selma, he was cast as U.S. Congressman John Lewis. 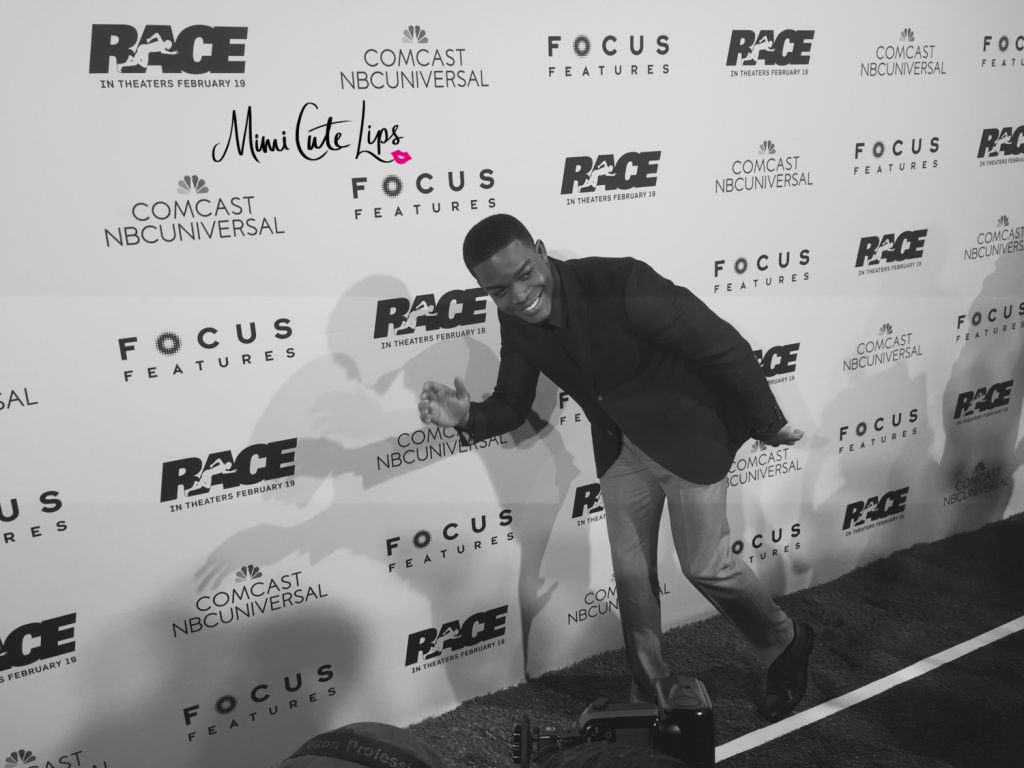 I had a chance to chat with this young man and he is going to set Hollywood on fire. He was the perfect gentlemen, he was confident in his talents, he was honored to portray such iconic men period but especially in the black community. This young man has his head on straight and I can’t wait to see more from him. Fun Fact: Stephan trained the same way they did back in 1936. He did all the athletics in the movie, no stunt doubles. 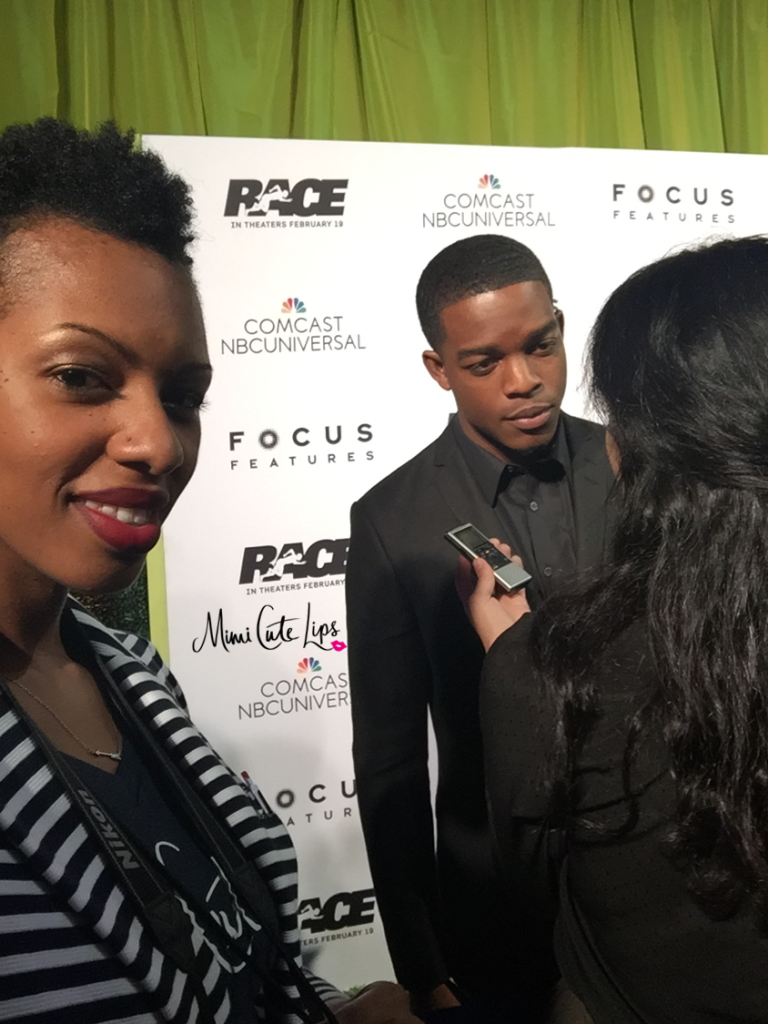 After the interview, I did with him for KMW Exclusive I had to snap a picture. Because selfie. Fun Fact: Stephan got his name from the classic show Family Matters. In the show, Steve Urkel created a machine that made him a “cooler” version of himself. That cooler version was named {Step-fahn Ur-kel}. 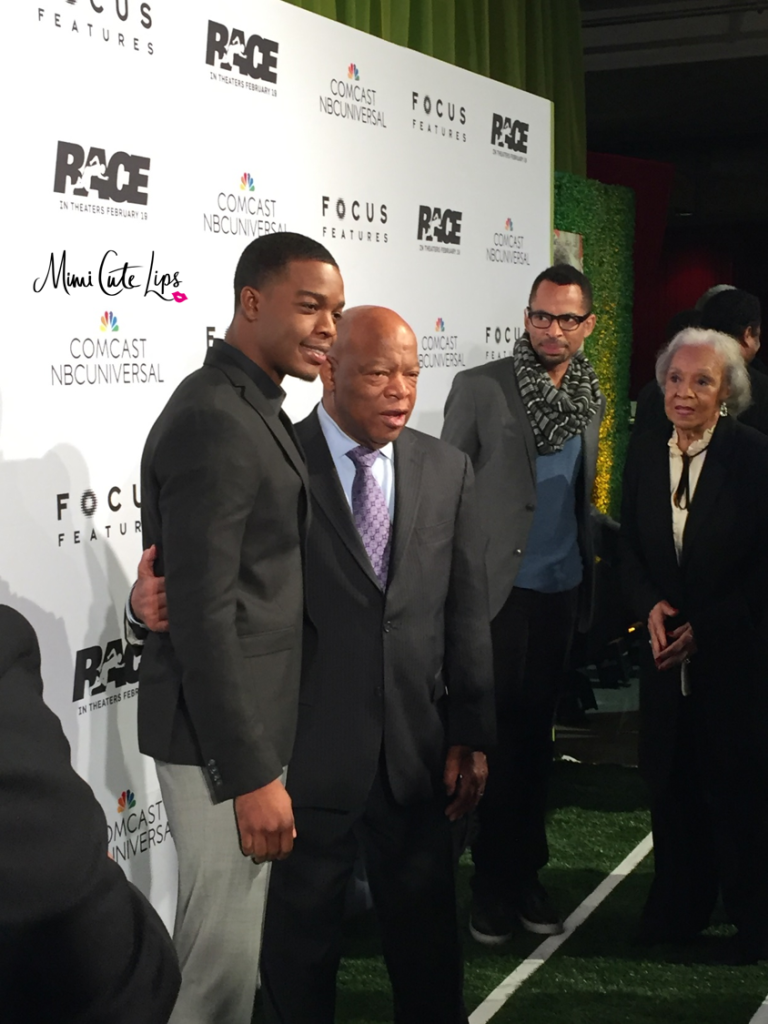 Stephan went from portraying U.S. Congressmen John Lewis to having him come to support and see him in another film.  Show up and show out black men. 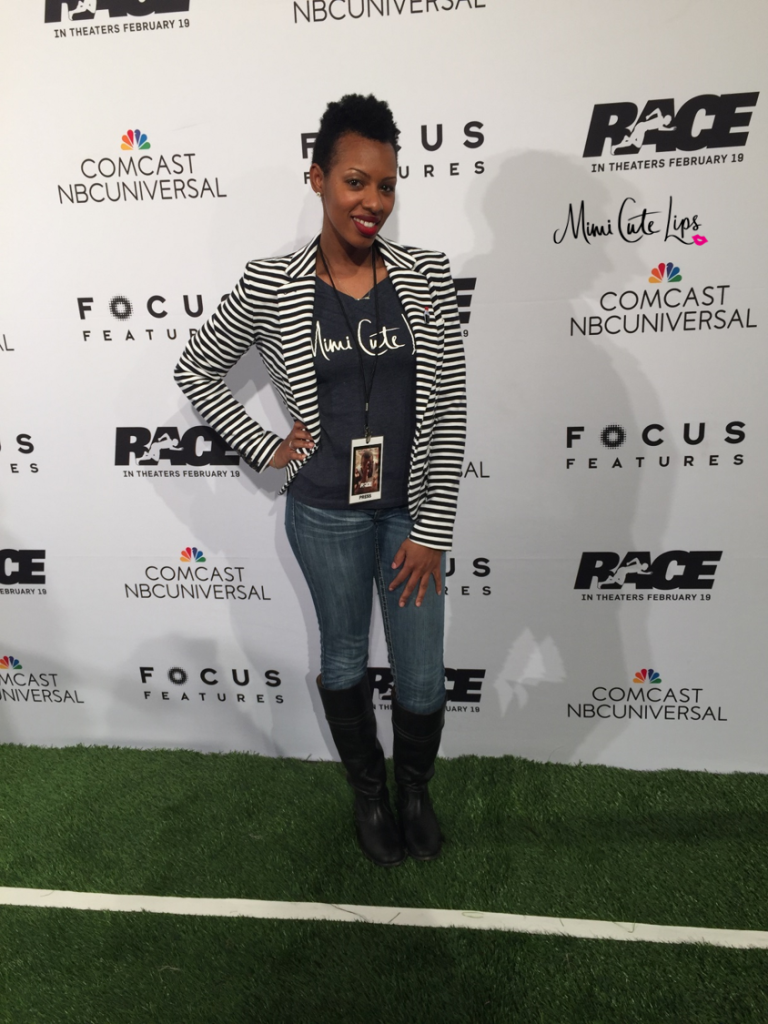 MimiCuteLips on the carpet – See my legit press badge

I mean if I do all this good work, then I need pictures to show for it. After the red carpet, we headed into the theater to listen to a panel discussion and then watch the movie. 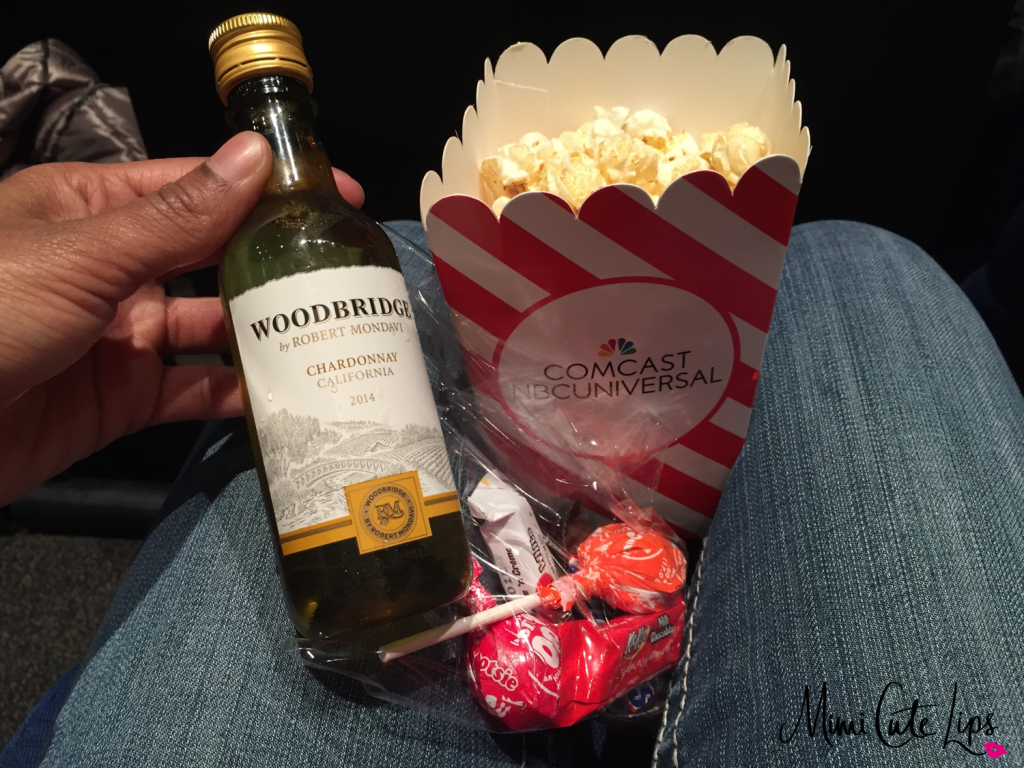 LISTEN!!!! I love when folks speak the same #fatsnacks language. They had popcorn, a candy bar, and personal size bottles of red and white wine. Yasssss! 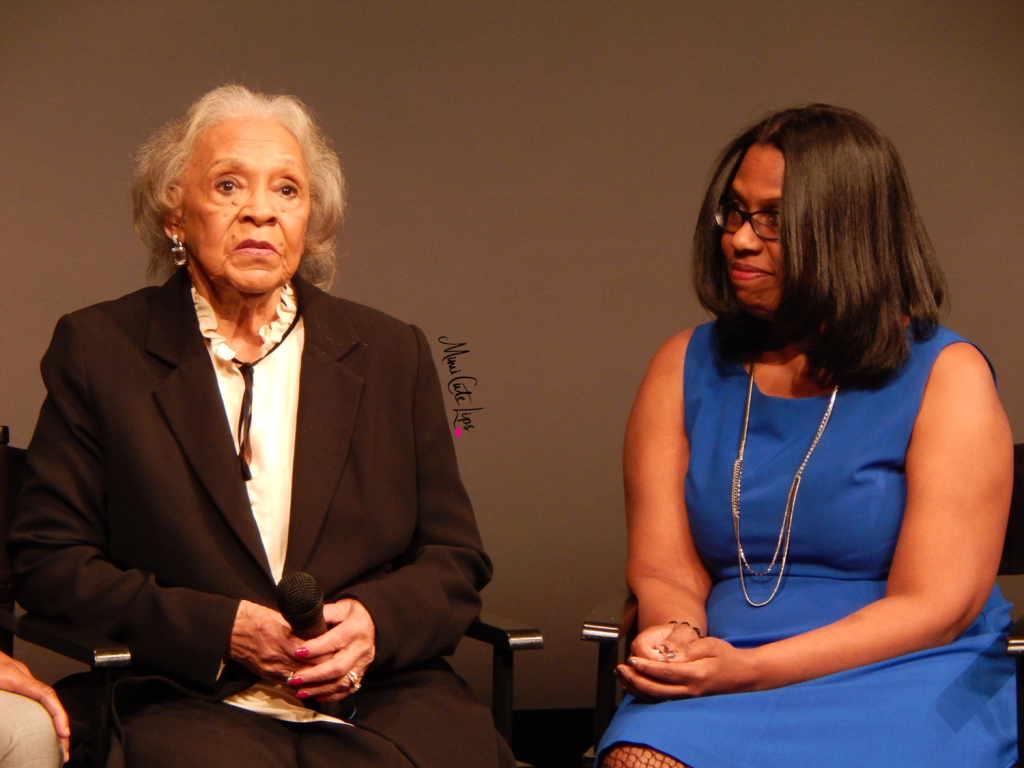 During the panel discussion, Gloria said the family loved the movie. The movie was the true essence of her father. That is the ultimate compliment to a director and actor. 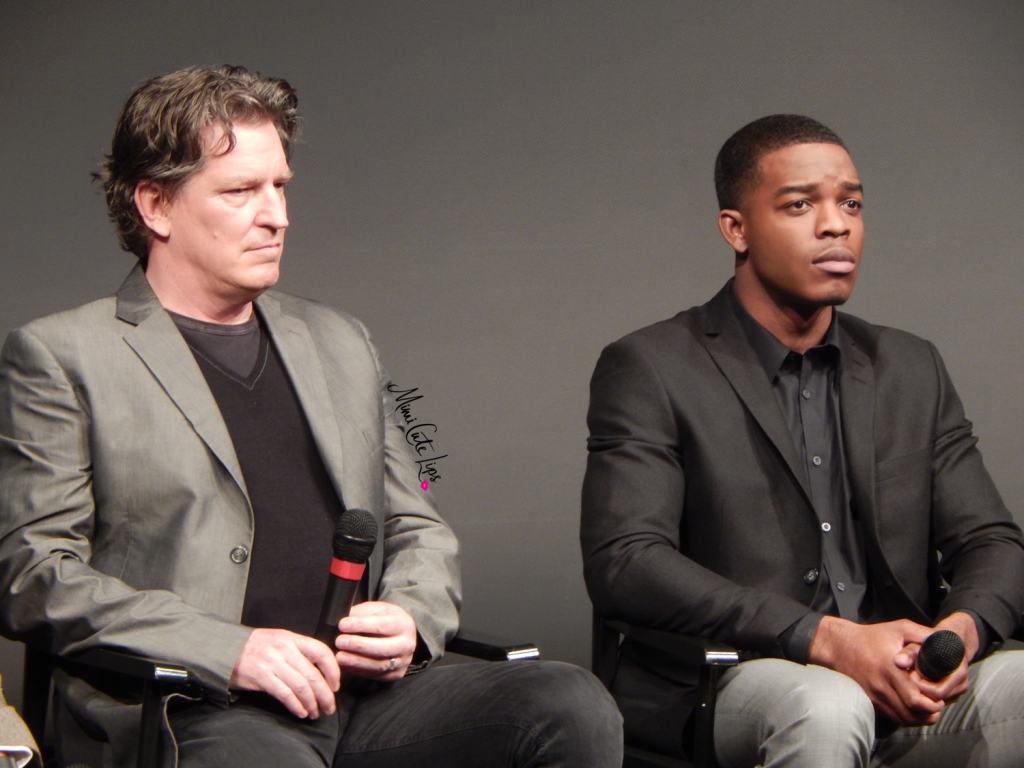 He has such a great attitude about this movie and I loved it. His passion showed in this discussion.  This is a MUST SEE MOVIE! This isn’t just for blacks; it is for ALL people. If you don’t know who Jesse Owens is this is still a great movie to see.

Jesse Owens is a legendary athletic superstar from the 1930s. He became the greatest track and field athlete in history. He would do just that winning four Olympic gold medals; in Berlin during Adolf Hitler’s version of Aryan supremacy.  Fun Fact: The White House didn’t acknowledge Jesse Owens Olympic win in 1936. It would take 25 years for someone to beat his record. 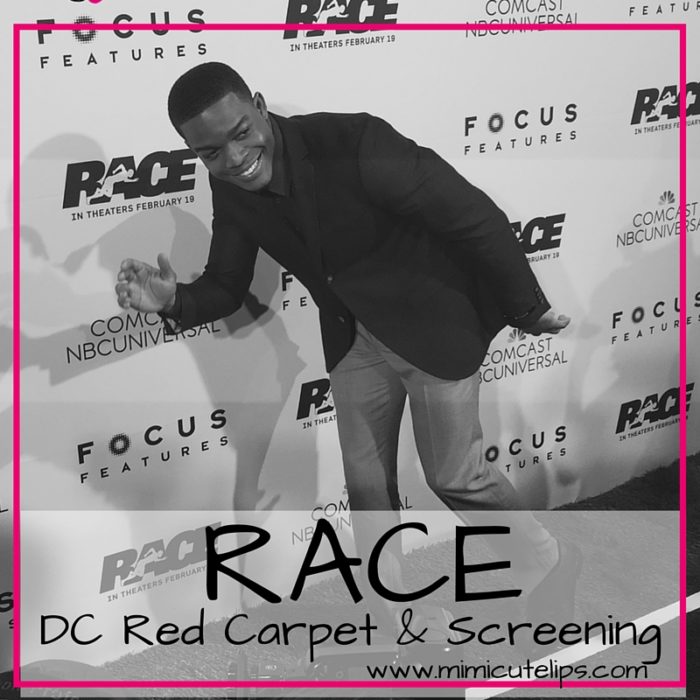 Do you plan to see Race? Chat with me in the comment below or FB, IG or Twitter.