Happy Monday, I hope you had a great weekend. Ours was full, on Friday I attempted a DIY #fail. On Saturday I attended the WOE Magazine Launch which was amazing. I followed that up with a baby shower with the family; I won two games. *body roll* Sunday we went jumping around at an indoor trampoline place with friends, it was 21 of us in total. After all that jumping we hit up the Silver Diner still 21 deep. Add in a couple of errands and then back home. Did you tune into the first episode of season 3 of POWER? The cast of Power was at Essence Festival but I didn’t get a chance to catch up with them. I did however catch up with all of these singers; I can’t wait to spill the tea below.

We had a great time chatting with the musicians and some of them even blessed us with their anointed vocals. Check the video below to see how sang their face off; you might even find an American Idol favorite in there… 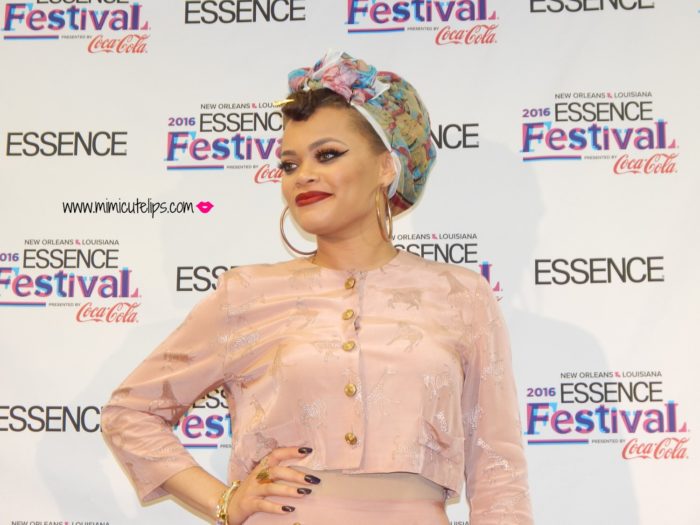 Andra Day is so cute and personable, she and I could totally hang out. She has a vintage style to go along with her amazing voice. Her hit song Rise Up has put her on every-bodies radar. Andra was discovered by Stevie Wonder’s ex-wife, she came across some of her YouTube videos and shared them with her husband. When Stevie Wonder gives his stamp of approval you know you’re on your way. 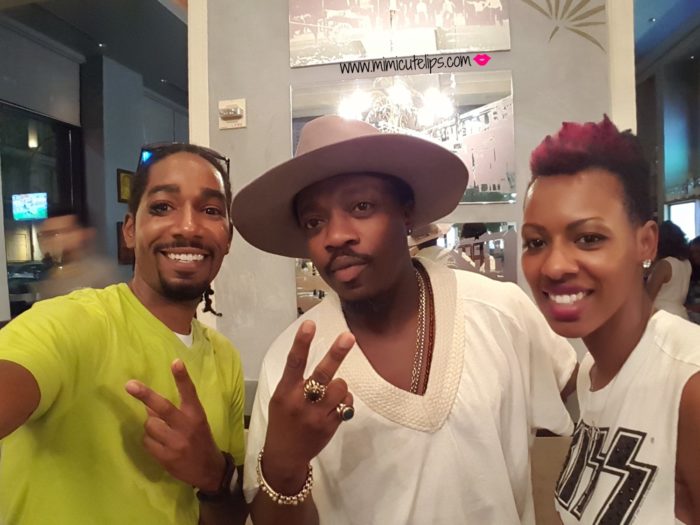 Everyone comes in town for Essence Festival so don’t be surprised if you see some of your favorite celebs just out and about. We ran into Anthony Hamilton in a hotel lobby. We’d just seen his show when he and Fantasia stopped in DC. This man is so freaking incredible, if I was getting married and I had money he would sing me up and down the aisle. He and the Hamiltones that is. 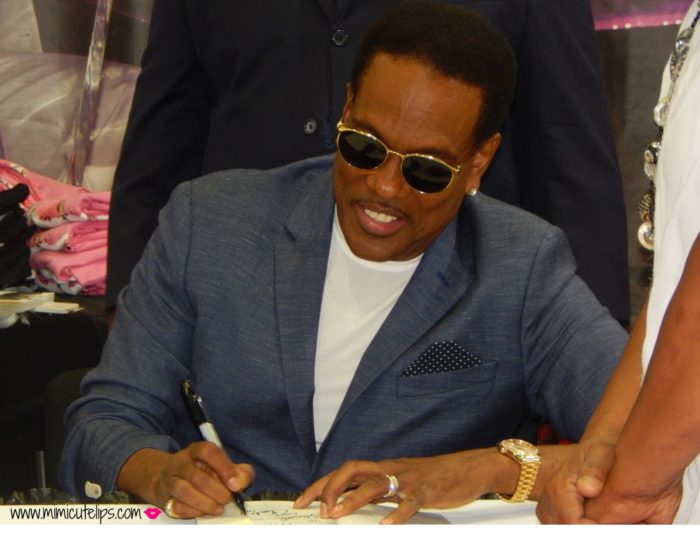 The iconic Charlie Wilson was there, he was meeting and greeting fans, signing autographs, selling his book and more. I covered his book signing event when he came to the DC area HERE. Later that evening he also performed at the Super Dome. 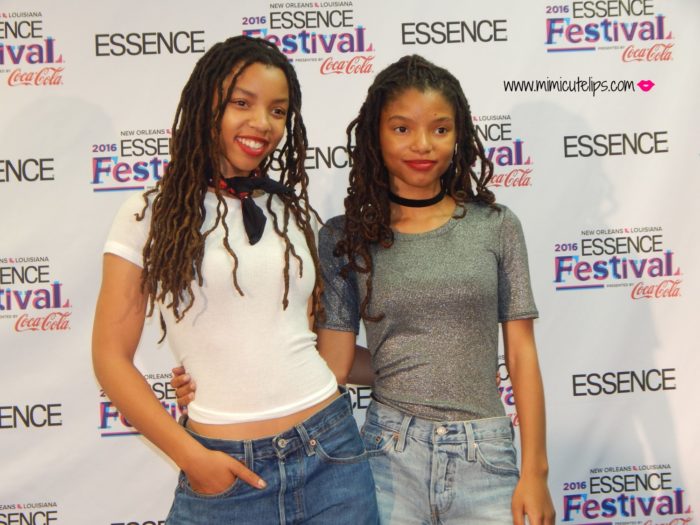 Sister duo Chloe & Halle are so cute and they have a singing style that you just don’t find in such young ladies. They were also discovered on YouTube; they had become known for their cover songs. Lots of young aspiring artists are using social sites like YouTube and Soundcloud to promote their music. Often they have to look at the best site to buy Soundcloud plays in order to get noticed but luckily the sister duo struck gold early on. Their cover of Pretty Hurts went viral, after 12 million views they would end up getting a call from Beyonce. After a chat she signed them to her Parkwood Entertainment label. Talk about a dream. Listen to them at the 00:11 mark. 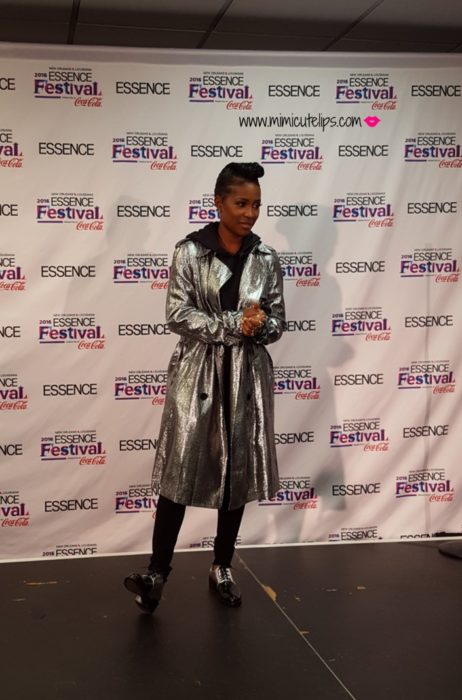 Dej Loaf is so freaking cute and I so dig her style. She is a singer out of the big D, Detroit. Her break out song is simply titled “Try Me” rapper Drake posted some lyrics from the song and it went viral. Her song came to her out of general frustration. I so feel her right now, I’m in a total “Try Me” phase. 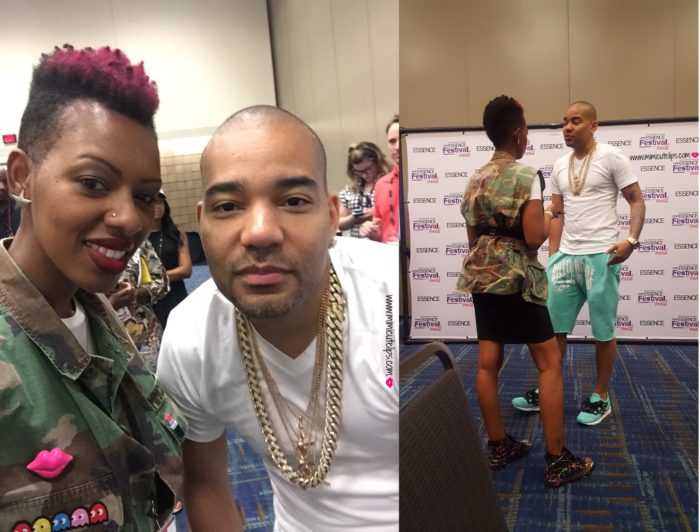 Dj Envy is one of three of the ever popular Breakfast Club host on Hot 97 in New York. I’m sure they have some of the highest ratings out there. They also have all of Hollywood stopping by to chat with them. That also includes those of the political variety as well. 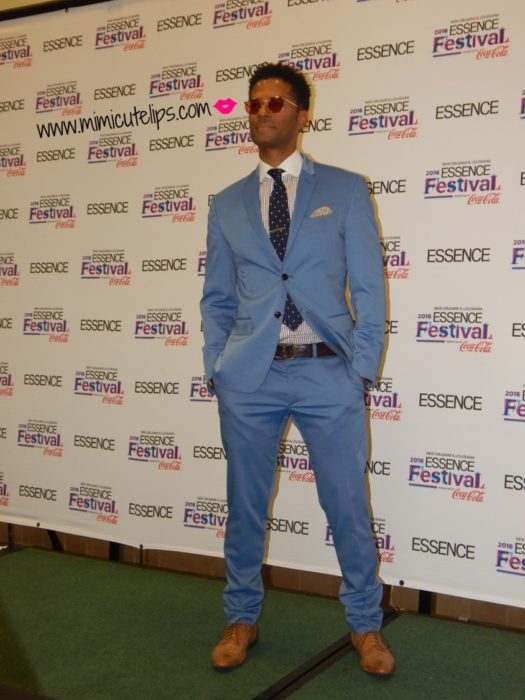 I hadn’t seen Eric Benet in a minute so it was nice to see him chat with us. If you aren’t familiar, he is an R&B Singer. His song Spend My Life with You featuring Tamia was a huge hit, it has also become one of the go to wedding songs. Fun Fact: He was married to Halle Berry and is currently married to Manuela Testolini, Prince’s ex-wife. 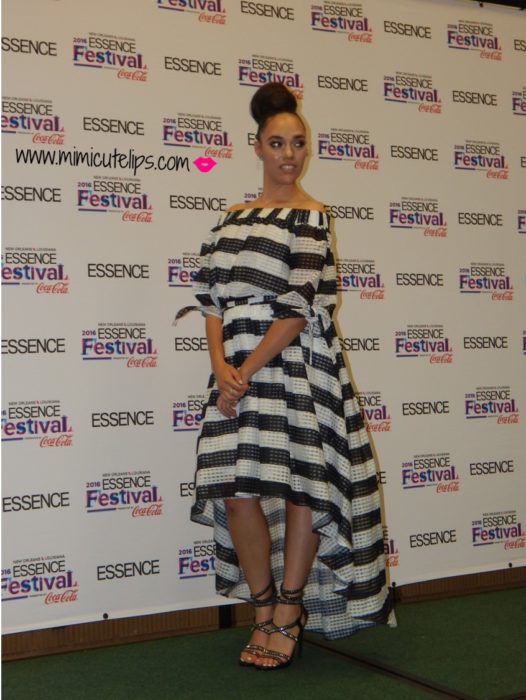 This beauty here is Grace Gibson, she is playing Faith Evens in an upcoming movie about Tupac, All Eyez on Me. She sang a tune for us and my gosh; this girl has a soul so deep I didn’t see it coming. Fun Fact: She is the daughter of the iconic Lynn Whitfield and the late Film Director, Brian Gibson. Listen to her sing at the 00:53 mark. 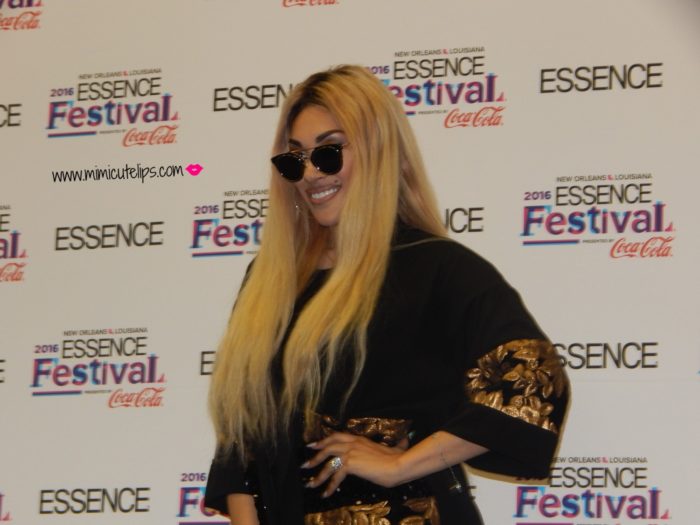 Keke Wyatt had her face in the place, I totally didn’t expect to see her. She has an incredible voice range; I’m talking better than Mariah Carey. Her hit single was a collaboration with R&B singer Avant, Nothing in This World in 2002. Keke was also on R&B Divas, Atlanta. 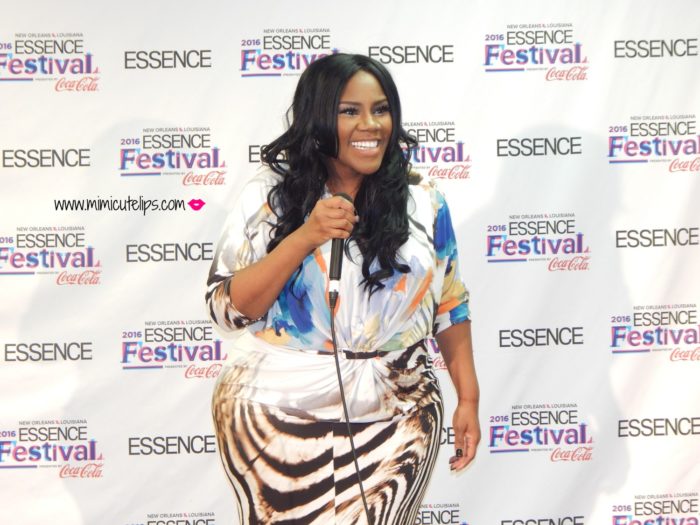 Six-time Grammy-nominated American R&B singer and songwriter Kelly Price was there to sing her face off. She did a tribute to the Clark Sisters and for Prince‘s Tribute. Essentially Kelly was discovered by Mariah Carey she told her then husband Tommy Mottola about Kelly’s voice. Kelly went on to sing back up for Mariah Carey‘s “Fantasy”, The Notorious B.I.G.‘s “Mo Money Mo Problems”, Ma$e‘s Feel So Good, and Whitney Houston‘s “Heartbreak Hotel” before coming out as a solo artist. 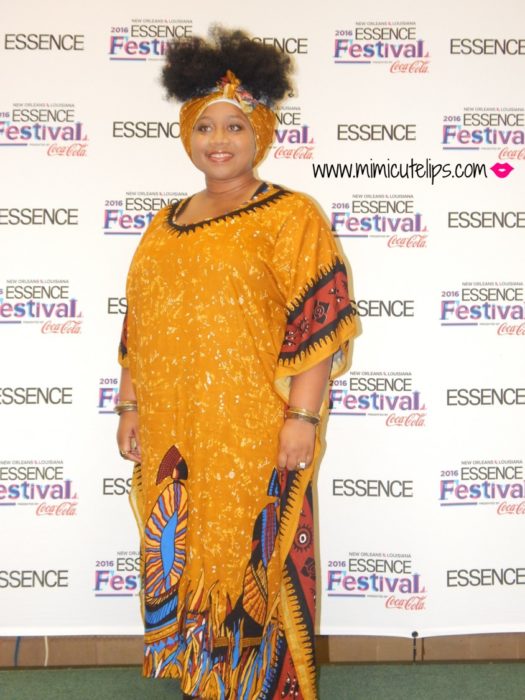 American Idol favorite La’Porsha Renae was there and I was so excited to see her. Week after week she took that stage and sang her joy, her pain and her truth. There is something so genuine about her that you can’t help but love. All of this takes place before she even opens her mouth; once she does it is O-V-E-R! She melts our hearts with ease one single note at a time. I had to keep my ish together while she so graciously belted a tune for us. Listen to her sing at the 02:19 mark. 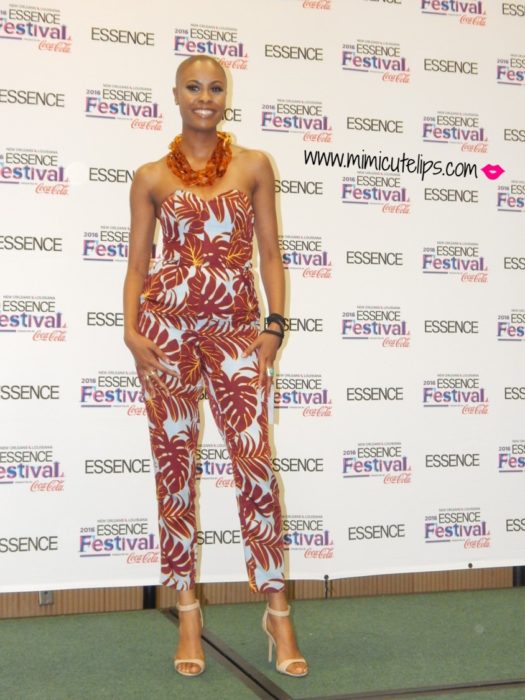 Known as the second runner-up on BET’s Sunday Best, gospel singer Latice Crawford. I love a skinny, brown, bald head gal; it reminds me of myself. Now if I only had the chops that Latice has I would never close my mouth. Since Latice arrived she has been kicking butt and taking names and growing her career. Listen to her sing at the 03:12 mark. 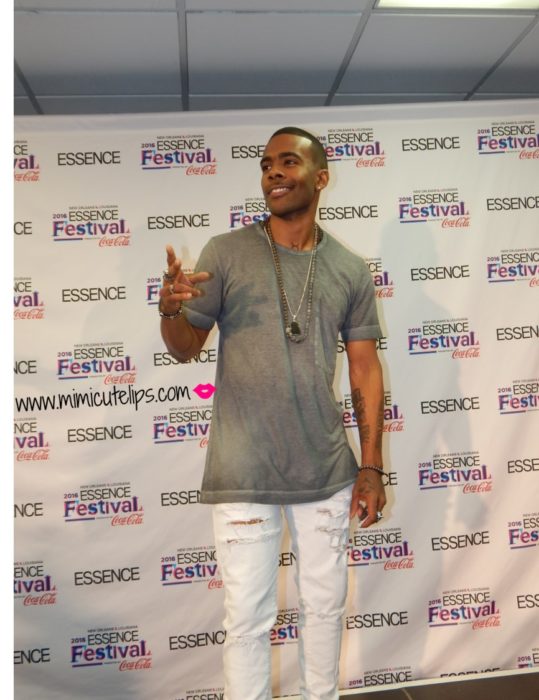 Baltimore native, Mario is back on the scene and he is doing more than just singing. He has his own label and it scouting for new talent and working on a book. It was nice to see him back at it, I used to sing his songs real hard. Listen to her sing at the 04:15 mark. 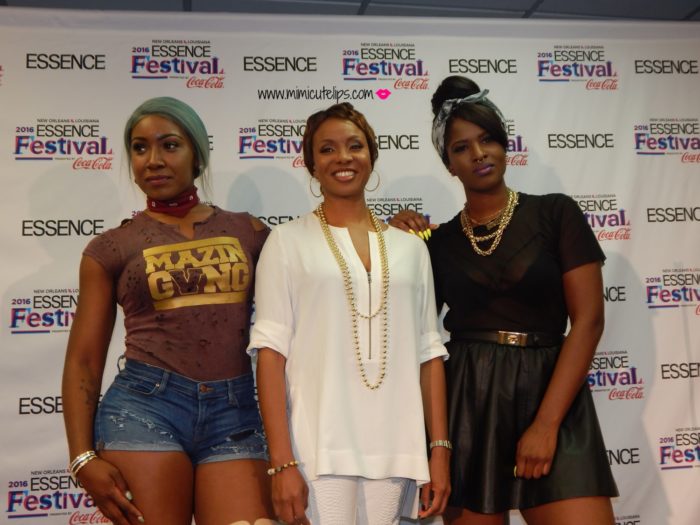 {Inset total fan moment} The one and only McLyte, she was on my list of must see people before I even left home. I gave you some backstory on her when I passed her in the hallway of the United State of Women. I aspire to do a lot of things she is presently doing. She told us about her Essence experience, and these two young ladies she is now working with. 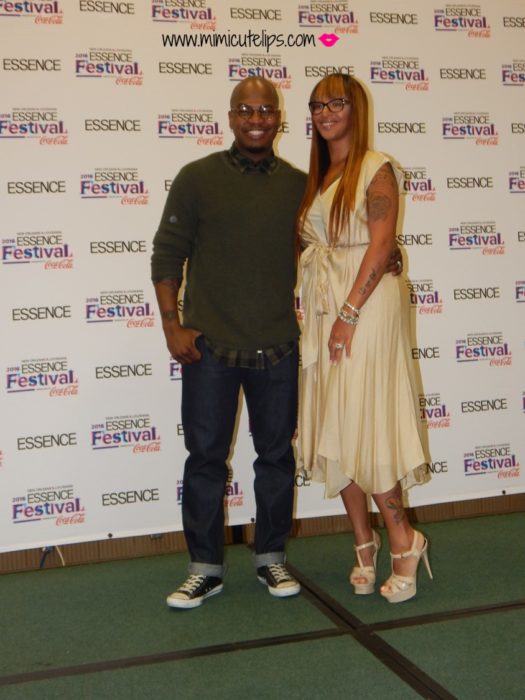 Seeing Ne-Yo gave me kudos with my four-year-old. She loves Princess and the Frog and he sings the song she loves. It is the only music video on the DVD. hahahaha Ne-Yo got into the industry by writing for other people, including the likes of Beyonce. While continuing to write for others he came out as a solo artist and started acting. Ne-Yo has an adult cartoon coming out on TV and it sounds really funny. He warned us that this is not for your children. Ne-Yo and his bride Crystal were married in February of this year and shared that experience on TV. They followed that up with the birth of their son in March. Fun Fact: We have the same birth-date. 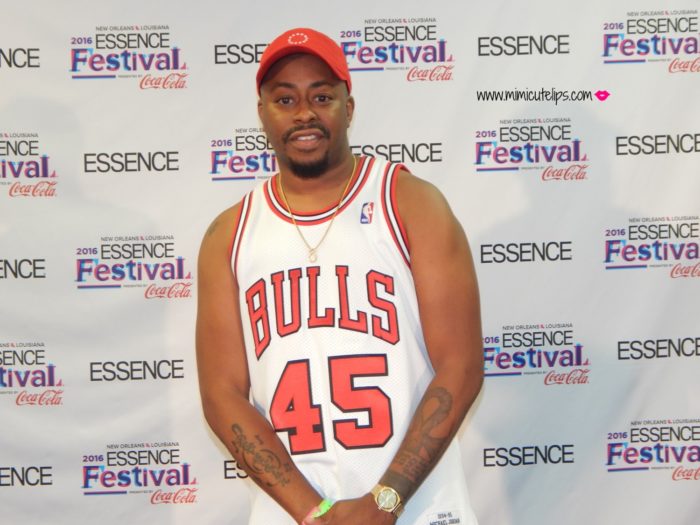 One of my favorites and DMV’s own Raheem Devaughn had his face in the place. He is working on his new collaborative album with The Crossrhodes, this group features Raheem and Wes Felton, they’ve been together for over 15 years. Grab their album titled Life at The Crossrhodes, they are currently on tour so see if they are coming to a city near you. 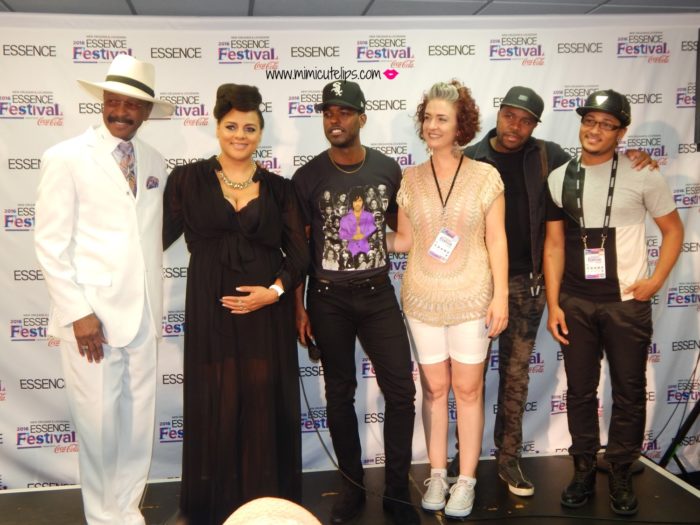 Essence Festival paid their respect to the Purple One aka Prince. It was a star studded line up and they sang some of their favorite Prince songs. Legendary artist Larry Graham, Sly and the family Stone (far left) was a spiritual adviser and friend, he lived a few doors down from Paisley Park. If you don’t know him Google One in a Million You. English singer-songwriter Marsha Ambrosius and all her vocal talents sang in honor of her friend. She is most popularly known for being in the group Floetry. Since the groups breakout she has carved out a solid career on her own. Fun Fact: She announced her pregnancy while at Essence Festival. Singer-songwriter Luke James with his contagious smile and pretty brown skin joined in on the tribute. Fun Facts: He started as a background singer to Tyrese before he started writing for some of the biggest names in the industry. Singer Ashling Cole aka Biscuit has some white girl soul; she gives a real Teena Marie vibe. She sings with Larry Graham and his group Graham Central Station Days. My name is D-Nice of Boogie Down Productions in the 80’s. These days he is a DJ and a photographer that often finds himself purchasing all the new dj equipment that he can, in order to keep up with his passion and love for music and DJing. He even DJ’d the set for the Prince Tribute. The gentlemen on the far right was a part of Prince’s New Power Generation. 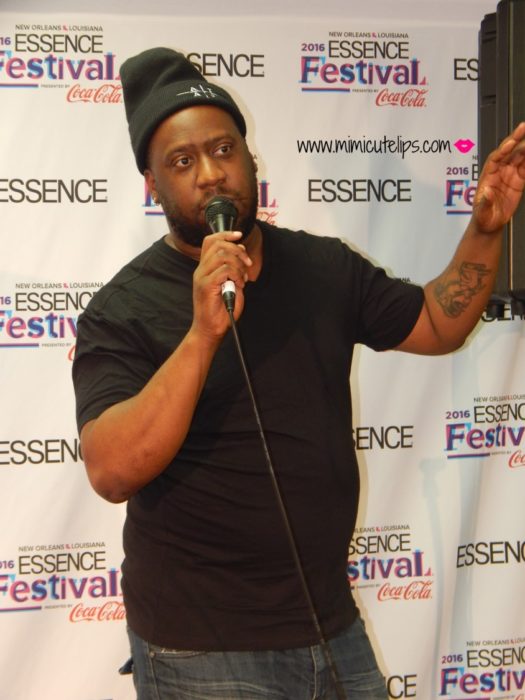 I had no idea who Grammy Award winning Robert Glasper was but he was hilarious. He is a man of many titles Musician, singer–songwriter, record producer, composer, arranger. Who does Jazz, R&B and Hip Hop and he plays three instruments. Are you tired yet? He is currently working with Common on his new album. He did a song with Erykah Badu titled Maiysha, featured on the Miles Davis tribute album. Fun Fact: Nike commissioned Robert create a song to honor Kobe Bryant in his final NBA season. The song is titled “Be Courageous.”

You don’t want to miss all this good singing. Gospel artist Travis Greene at the 6:22 mark. 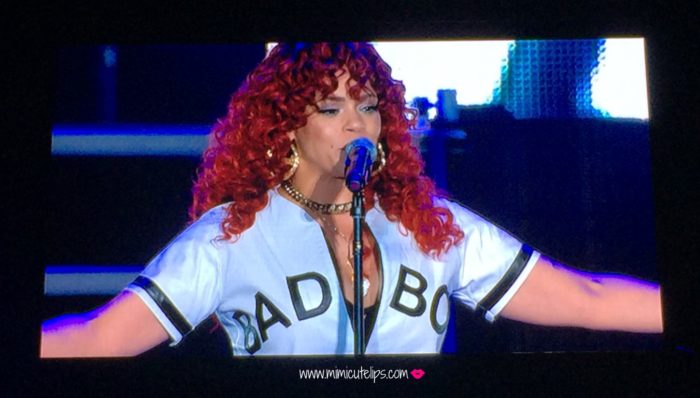 The Bad Boy Family Reunion graced us with their presence. They are one of the hottest tickets of the summer. They take me back to my youth, back to a time when I knew all the words to rap music. The original Queen B, Lil Kim was too busy to show up; I was so looking forward to shouting the extremely vulgar lyrics from her Hardcore album. {Don’t judge me} to the top of my lungs. Singer Faith was there and she killed it, she still has a great voice. 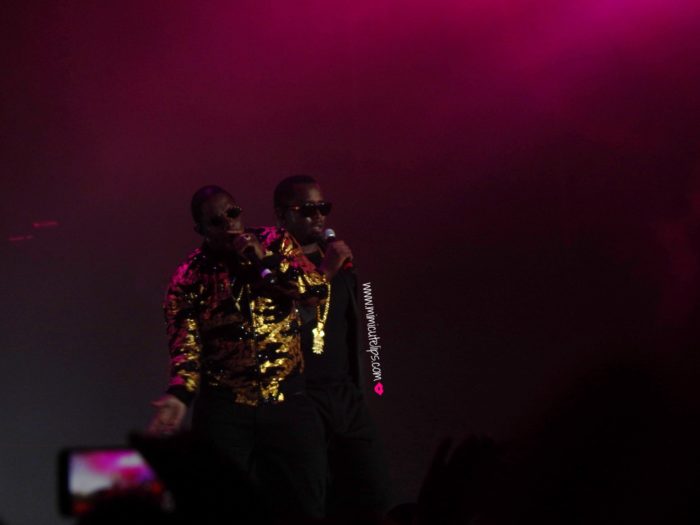 Seeing Ma$e and Puff on stage again was a little bit magical. That is the power of music, good or bad it takes you back to a very specific time and place. This was a happy place for me. They gave us all that they had to give. 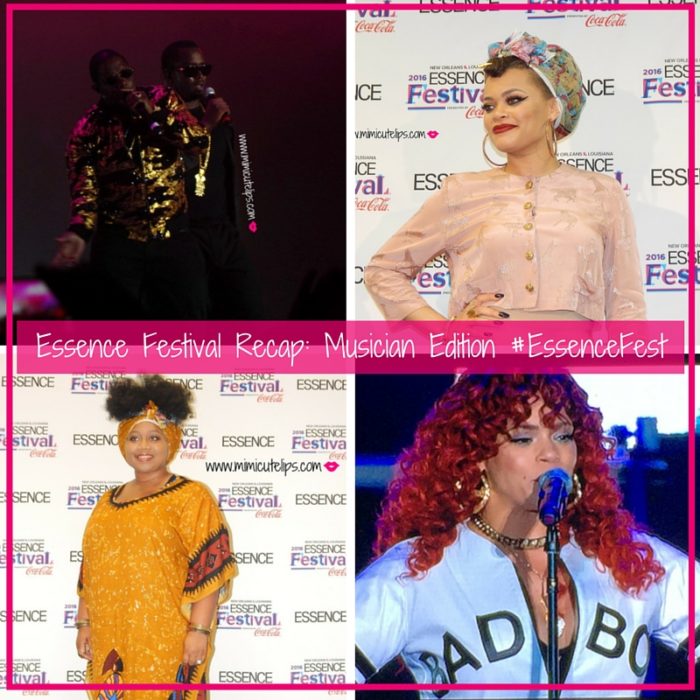