I’m fresh off an amazing five days in New Orleans and still sorting through over a thousand pictures. Three days of Essence Festival that was so freaking major. It was so much going on I didn’t even do half of the activities and still had a ball. I posted tons of pictures and videos on IG and Snap as promised. Even with all of that I still have so much to share.  I’m going to do a five party harmony, five party harmony.

Some people dream of exotic islands for their dream vacation. For the past 11 years New Orleans has been that place for Babe and I. We’ve watched all of the Katrina Documentaries and loved the show Treme. We used to do couples trips as a way to recharge our relationship and ourselves.  After having baby #2 {now 4 years old} we put our couple trips on hold. Last year we did a couples trip for the weekend and had a great time. This year we turned it up a bit more, we did another couples ski trip with five other couples. Last month the two of us went to Philly for the day and last week we left for New Orleans for FIVE DAYS! 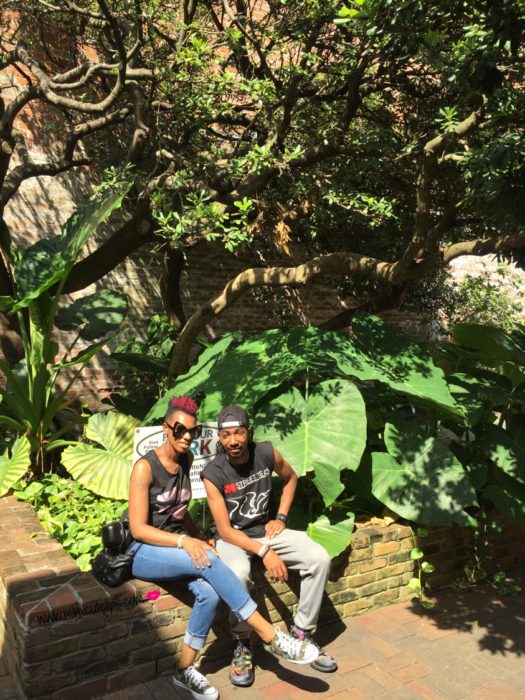 Jean Lafitte National Historical Park and Preserve is a really cute little historical park. You almost miss it when you walk by because it has a small entry way among-st a row of store fronts. It is a cute a cozy little space with really cool greenery. Do you see how big these leaves are? 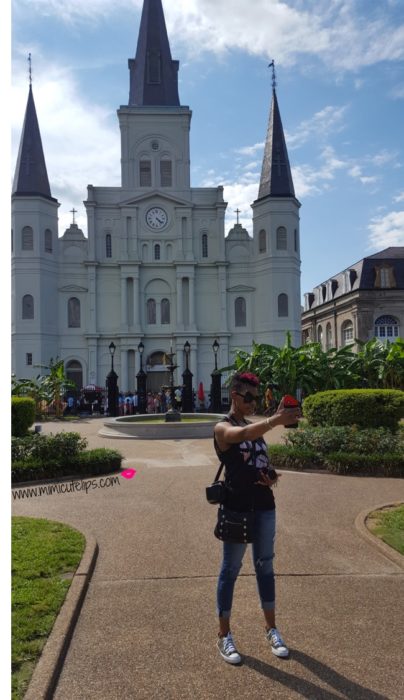 Because we were such big fans of the show Treme we were familiar some popular areas and landmarks. Jackson Square was one of them, according to wikipedia Jackson Square is a historic park in the French Quarter of New Orleans, Louisiana. It was declared a National Historic Landmark in 1960, for its central role in the city’s history, and as the site where in 1803 Louisiana was made United States territory pursuant to the Louisiana Purchase.  The St. Louis Cathedral is the perfect backdrop for my photo-op. I look like a total tourist. 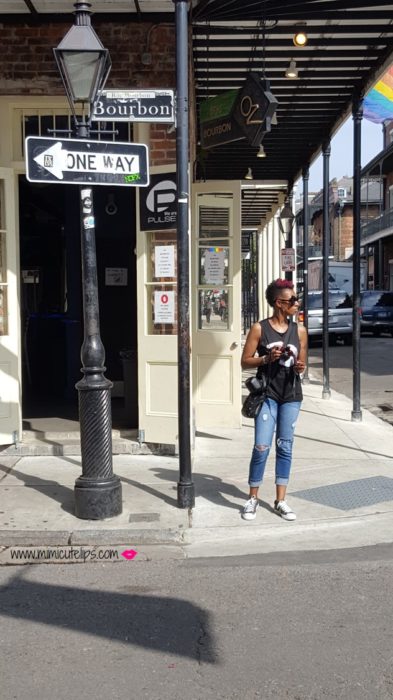 Bourbon Street (French: Rue Bourbon) is a street in the middle of New Orleans’ oldest neighborhood, in the French Quarter. It is about 13 blocks and runs from Canal Street to Esplanade Avenue. It is known for its night life. Aka a tourist trap, they have a variety of clubs and street entertainment. You can easily run into celebs on Bourbon Street, especially while Essence Festival is going on.  Babe got a really dope shot of me, that color is popping. 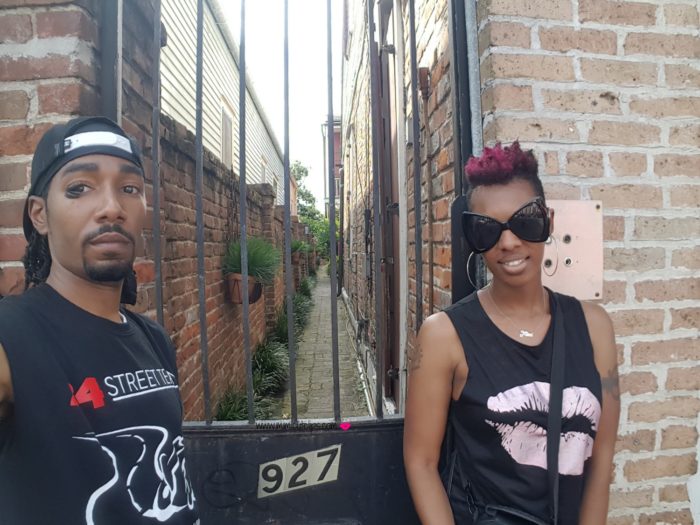 Because we love cute landscaping and iron gates. The extreme humidity kept out skin looking all dewy and glowy and what not. 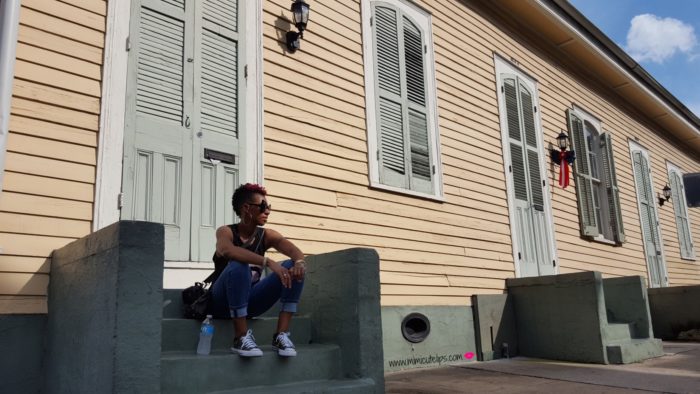 I need to go ahead and put Babe on the payroll. He has such a great eye and I took full advantage. We wanted to capture the essence of New Orleans and the look and style of their homes.  Growing up in the Bronx it gave me a great appreciation for a stoop. New Orleans had so many natural backdrops. 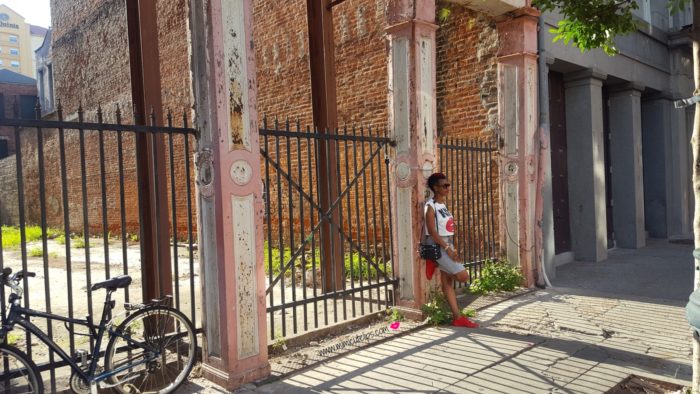 See what I mean, we were just walking and came upon this empty lot. One might consider it an eye sore but it makes for dope photography.  I freaking love the columns, I want some of these in my next home. I told you he does dope work. 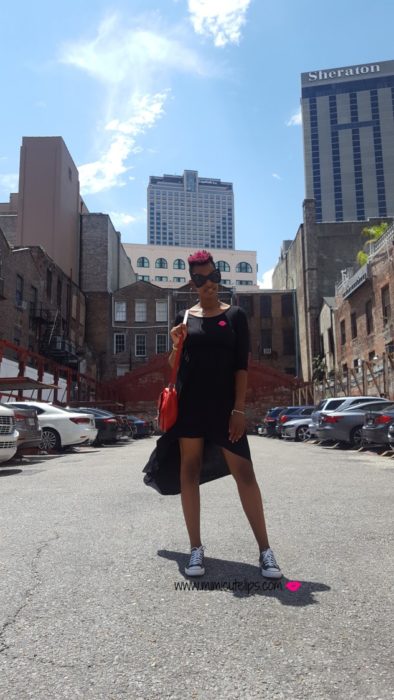 See what I mean, he made me look 10 feet tall. They’re levels to this thang, so much so I had to get in on the action. The wind was totally blowing the bottom of my dress and I was here for it, in this picture at least.  It totally Marilyn Monroe’d me a time or two.  I went for a comfy cute look the entire time; we did a lot of walking. No seriously I should have worn a pedometer, but it didn’t go with my outfit. 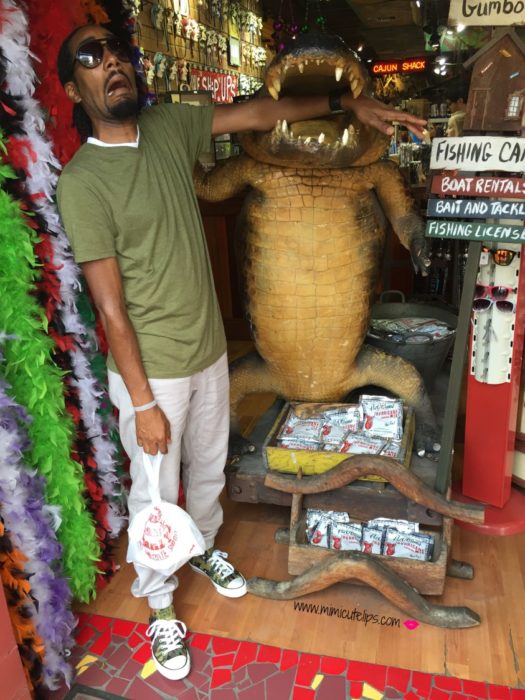 We had to snap a pic, I mean it is New Orleans. It tried to eat Babe’s arm. 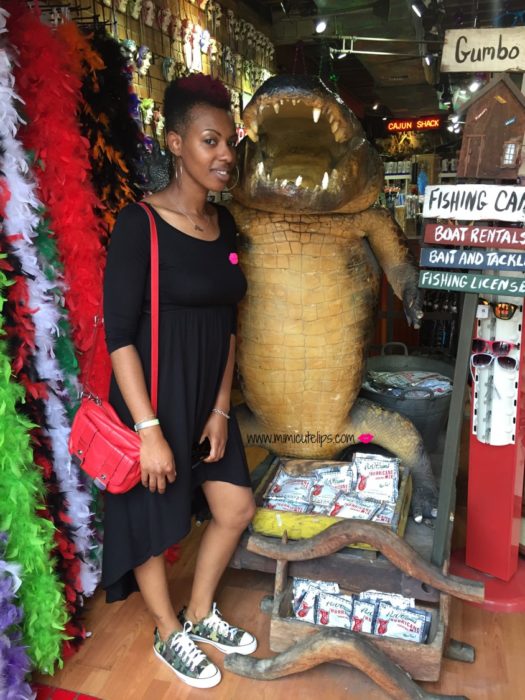 This gator isn’t the most lady like I mean with her legs spread and all.  I’m not judging her one bit, it is hot in N’awlins.  I had a blast checking out the local shops, they had so many cool things in there. 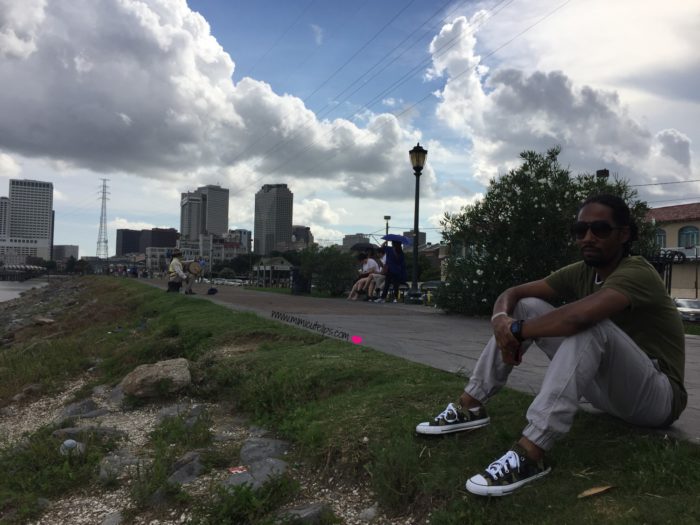 Perched along the Mississippi River

We decided to take in the view a bit before taking the Trolley back down to the River Walk. The boats were coming and going, the gentlemen in the picture was playing a tune and Babe and I were just taking it all in. 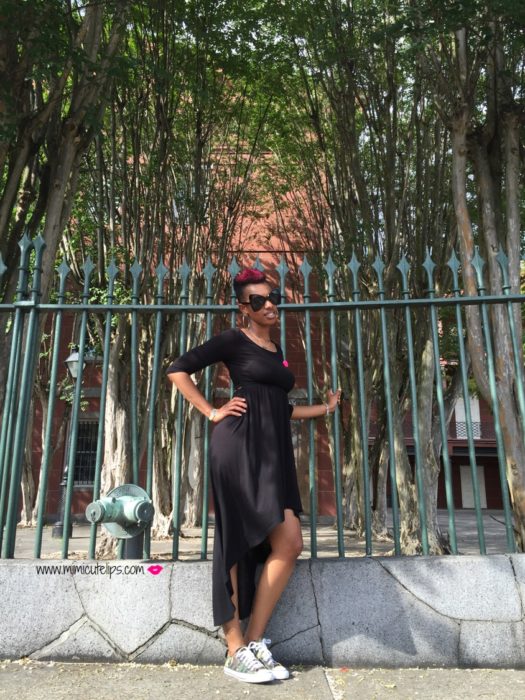 We took these pictures on the side of the New Orleans Mint. We just happen to stumble upon it, we had no idea. This location was a branch of the United States Mint from 1838 to 1861 and from 1879 to 1909. Not sure what the break was about but yeah. Fun Fact: This mint produced over 427 million silver and gold coins. 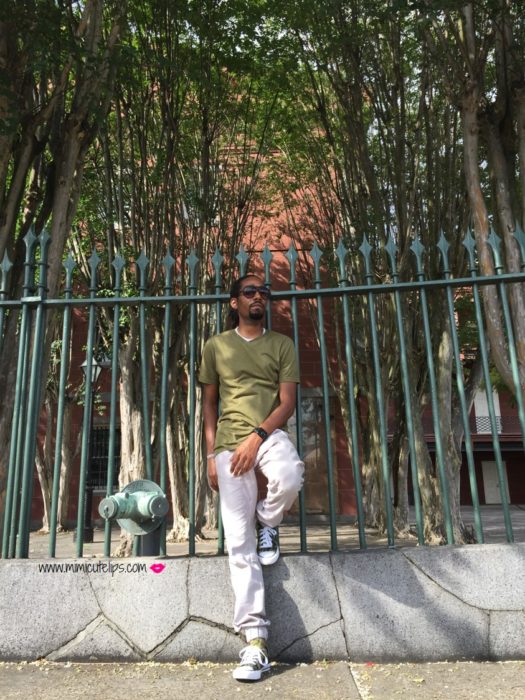 Babe had to get in on the action. Plus he was giving me photography tips and such. The trees look so cool, that is what caught our initial attention.  More about the Mint…

The New Orleans Mint has since been decommissioned and designated a National Historic Landmark. They also used the building as a fallout shelter; it was also damaged during Hurricane Katrina.  It would take them two years to complete all of the repairs.  The museum presently holds music exhibits that include instruments used by some of New Orleans’ famed jazz musicians along with pictures, and posters. It is said to open as the Louisiana Music Museum. 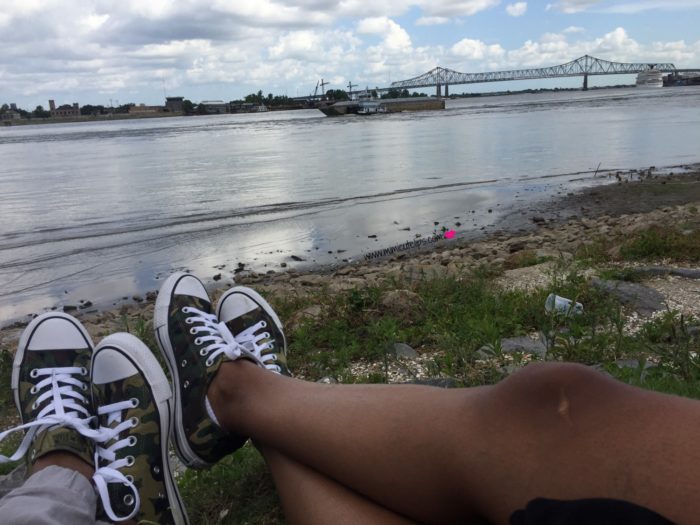 A quick game of footsie’s on the river

Okay, so not really. We both had on our camo Chuck Taylor’s so I had to get a dope shot of them. His were part of his Father’s Day gift. 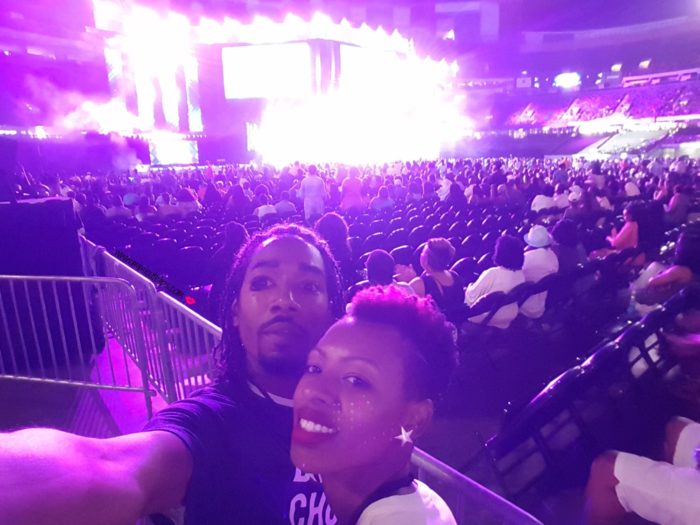 Night Caps at the Super Dome 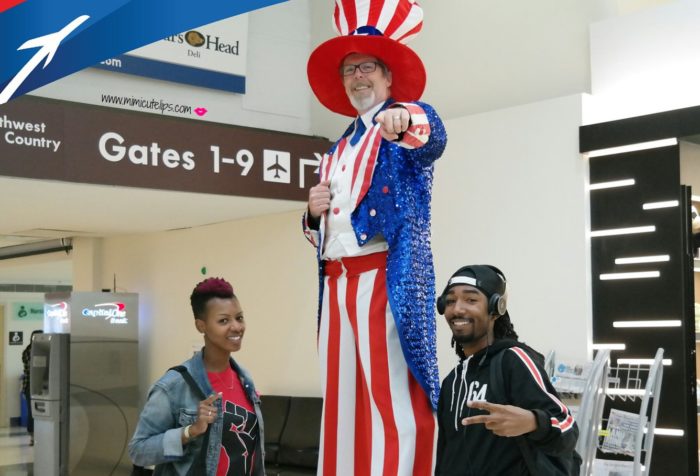 4th of July Welcome Home by

Babe and I loved everything about New Orleans and look forward to coming back again. There is so much we still want to see and do.  We flew back home on 4th of July and Ronald Reagan National Airport had this cute photo-op waiting for us.  This was as festive as it got for us since we returned home to 71 degrees and rain. 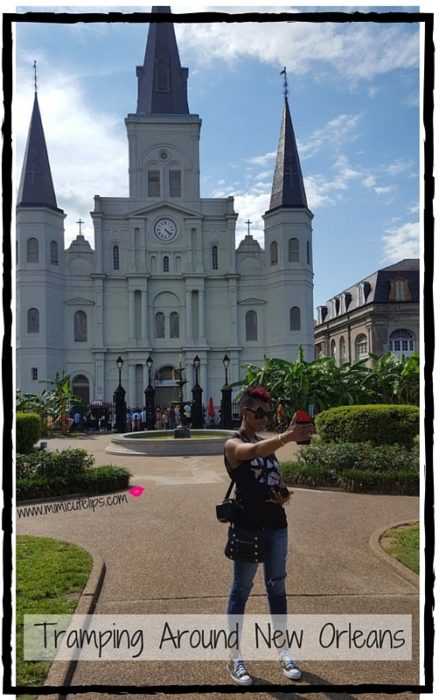