On Monday I promised to tell you about my adventurous weekend, well like to hear about it hear it goes. Over the weekend we set out for our second annual couple’s trip. We headed back up the Blue Ridge Mountains to the Wintergreen Resort. We had some unfinished business from last year. Same great destination, same beautiful house but a slight remix of couples. I must be honest, I was unsure if this trip would be as great as the last. No shade! You change one thing, you change everything.

Babe and I hit the road for a three hour trip with our snowboarding t shirts from boardit.com.au. Ignore the Wal-Mart bags in the back and don’t tell Target. The Wal-Marts further south are a much different experience than those in the North. I do enjoy the Super Centers, they are clean and big and opposite of everything I hate about the ones in the DC area. Anyway Target is #BAE and southern Wal-Marts might be a random thing on the side from time to time. 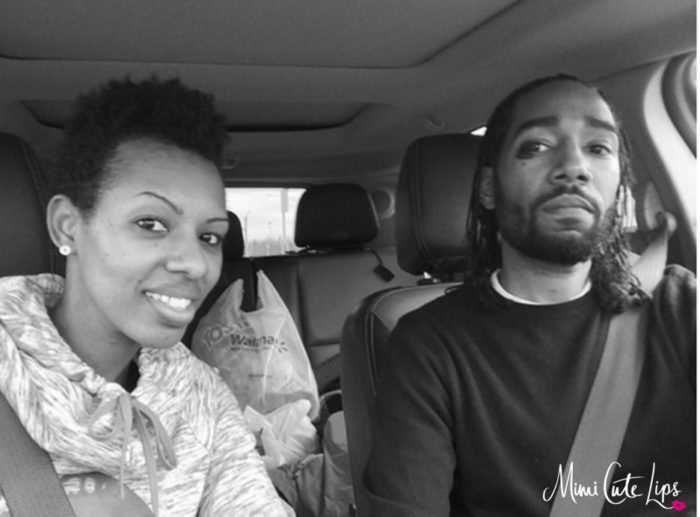 I’m still fighting and growing out this hair.

Dynamics are an essential part of group travel. With fourteen people under one roof group travel. So I wasn’t 100% confident going in but I’m happy to report it was equally dope. We also had a surprise bonus guest; more on that later. This year’s turn up was of a different variety but a turn up nevertheless. Last year there was the blizzard and the truck in the ditch. We didn’t have either of those this time. But we did finally go snowboarding. One of our friends on the trip had grown up in the mountains and knew all about skiing and snowboarding so they were the person everyone went to for help! He told us the basics, showed us this waxing guide (thanks Snowlink) for snowboards he had brought, informed us of the best places to hire equipment, and so much more. We would have been lost without him! 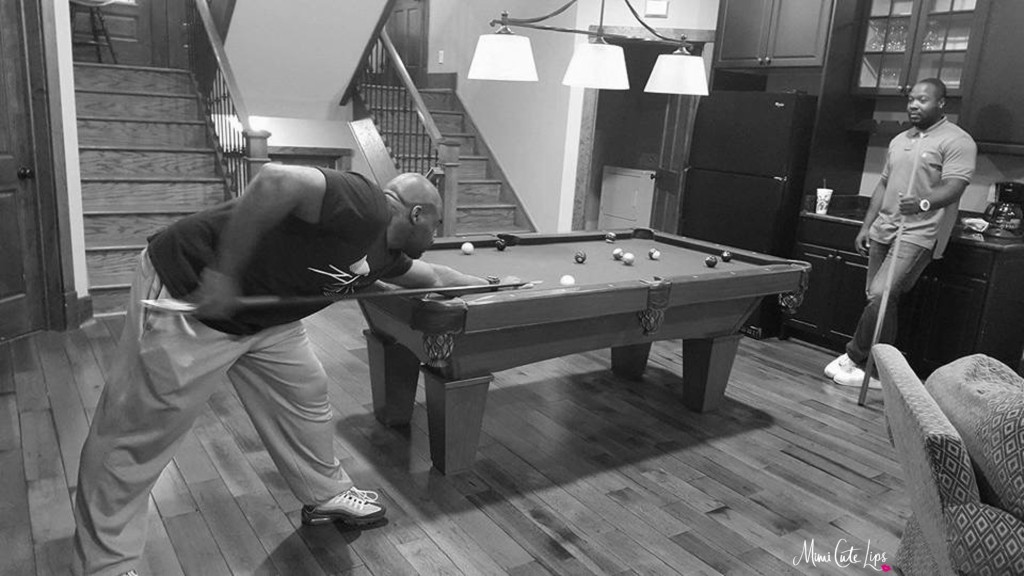 Day 1: We arrived and got settled in, the boys starting shooting pool. We chatted; we caught up and prepared dinner. By we I mean them, not me. I made #FatSnacks cupcakes the next day, they were bomb!

Everybody got dressed and we headed to late night tubing. 8:30PM – 10:00PM. The snow was unusually icy because the snow was man made. This means it’s hard as a rock and you go much faster. Insert scene of Rasputia flying down the water slide and out into the crowd. (Norbit movie reference.) People were going so fast that got stuck in the back fence that prevents you from death. 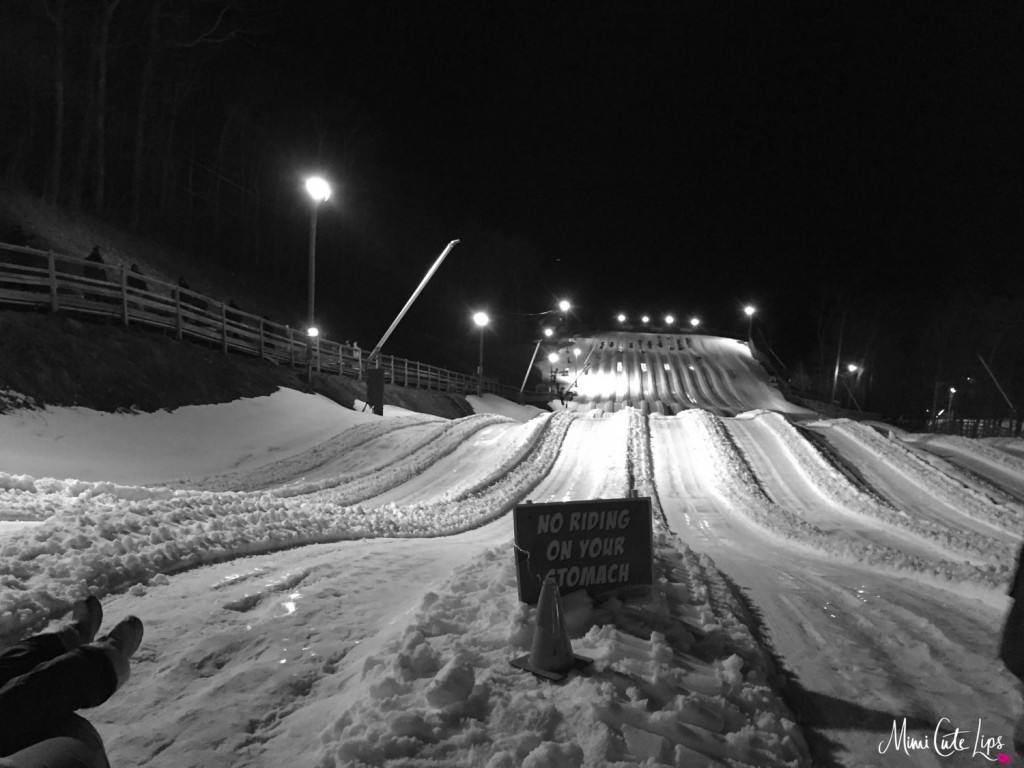 We had a blast; one of the girls in our crew was going so fast her hat flew off mid slide. Insert stupid Macho man challenge here. The mission: to retrieve said hat while tubing down the same lane.

They had siced {DC slang for hype} her dude to get it and be a hero all weekend. ? I told you it was stupid.

As luck would have it another dude in our crew would get the hat before the girls dude even had a chance. {Insert talking about this all weekend.}

In this video you can hear our shock and awe that he retrieved the hat on the first try.

I had the death grip on my phone; I did not want it to fly out of my hands.

OUR SURPRISE GUEST: For whatever reason our house had a bear in it this year. Not sure why, where do you even buy such a thing? Because adults are like children, the bear became our homeboy and would provide pranks on almost everyone our entire stay. 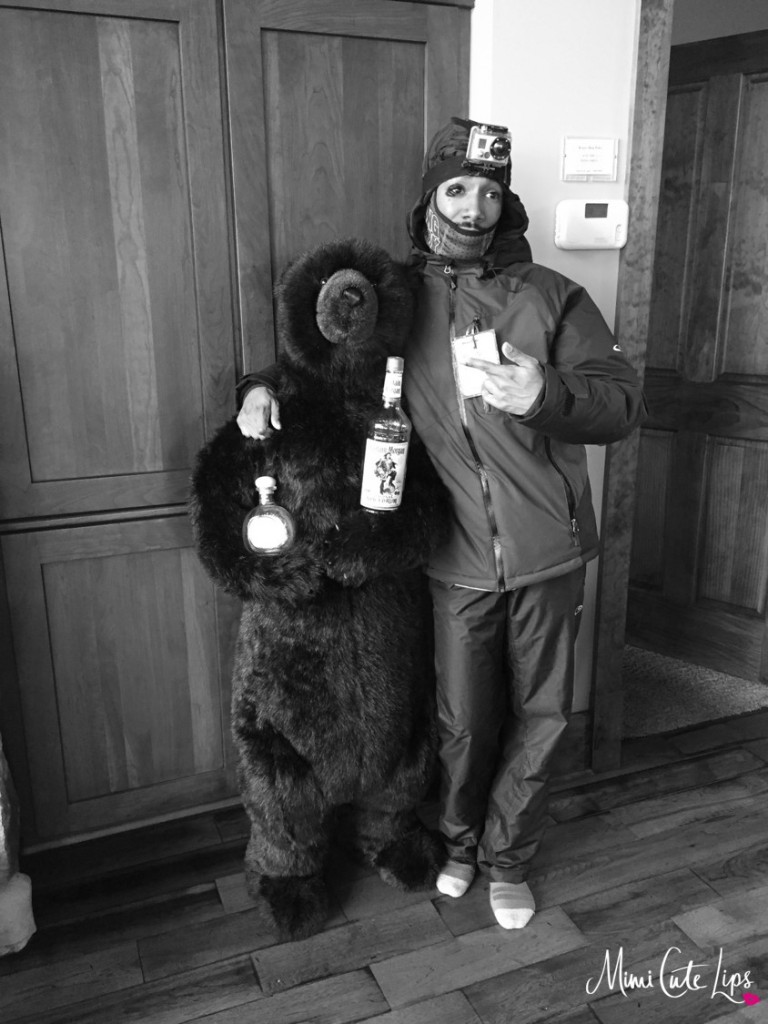 Day 2: Half of our crew set out to snowboard. We tried this last year and ended up in a ditch. 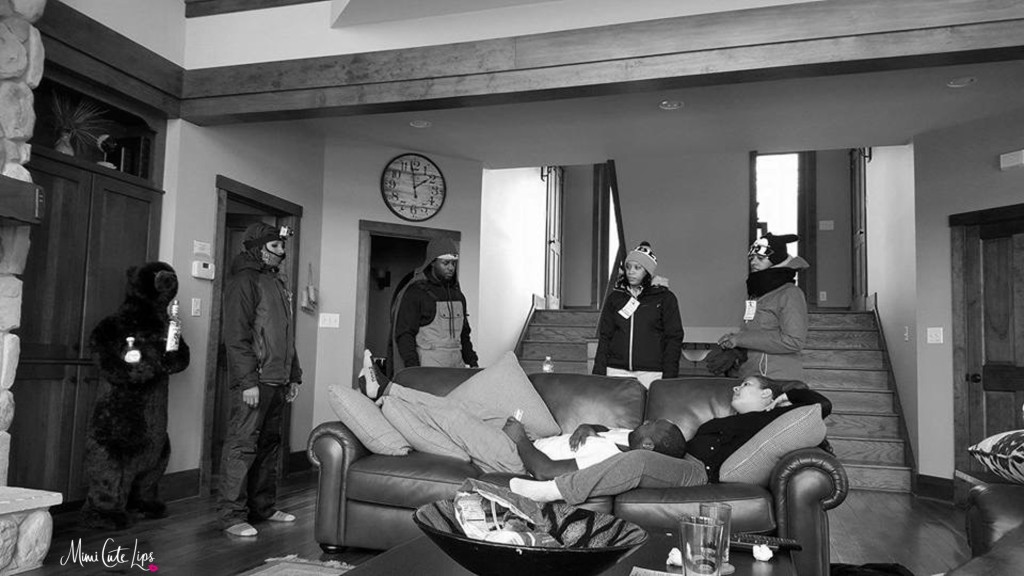 They are on the sofa clearly not moving.

I’m ready, we’re ready, I think. We are geared up; these snow boots make you walk like a cowboy fresh off a horse. Howdy partner! 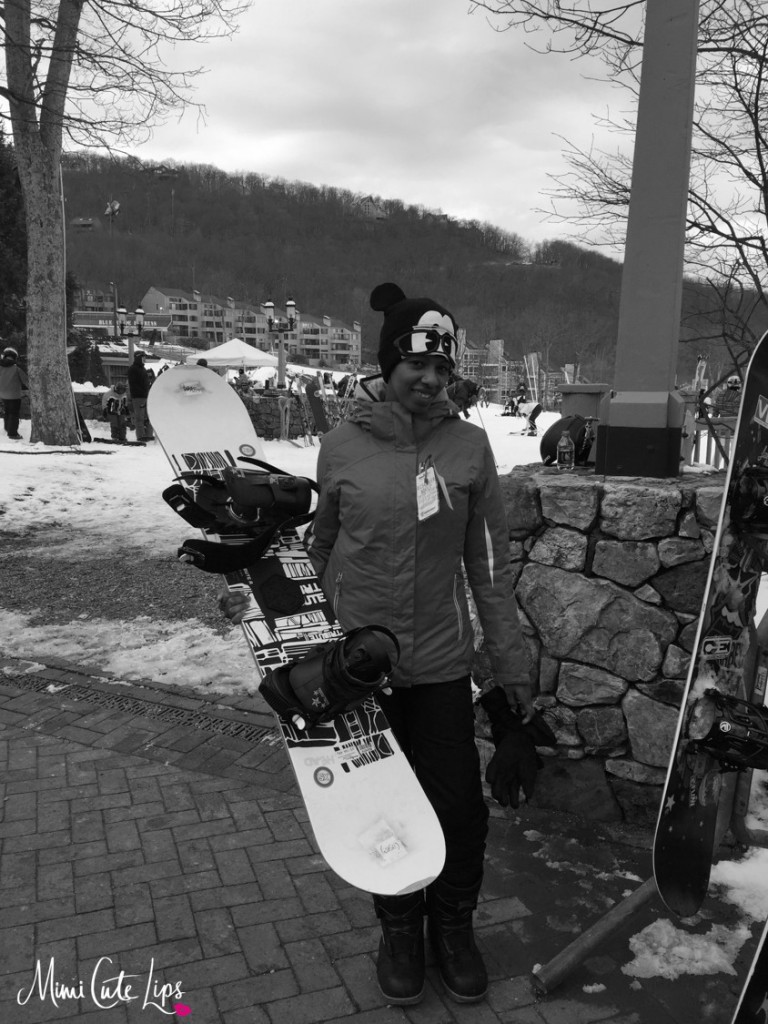 My snowboard was cute too. You know I care about things like that. 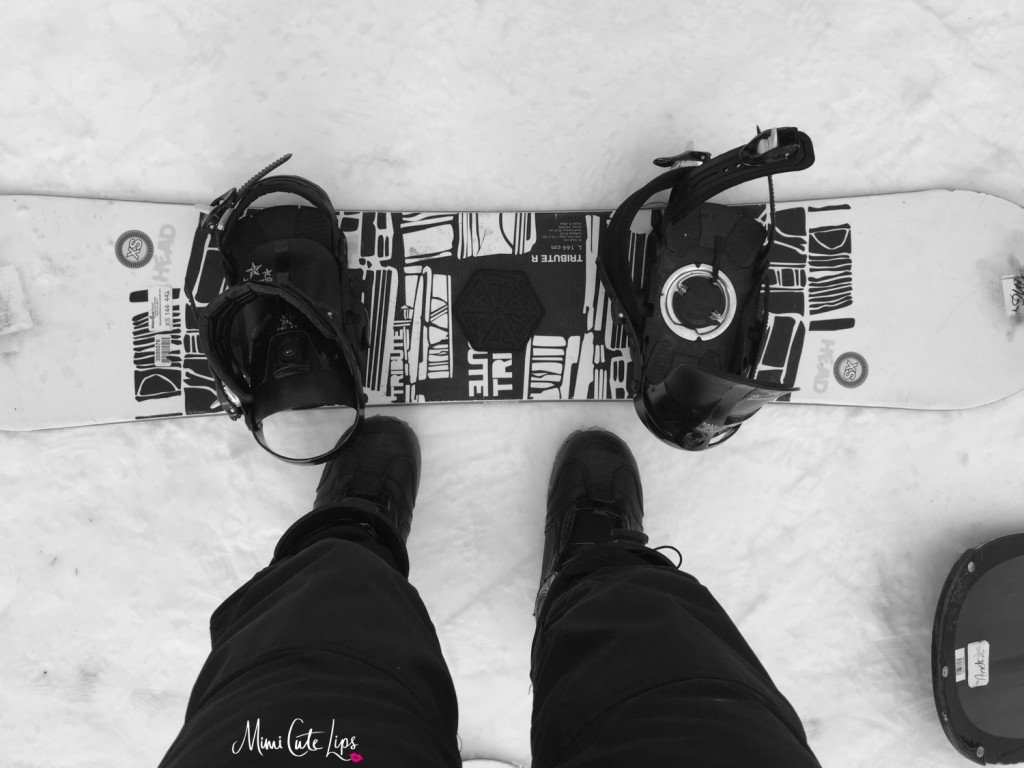 We are knee deep in our Snowboarding lesson. So far so good, I’m getting the hang of things one step at a time. 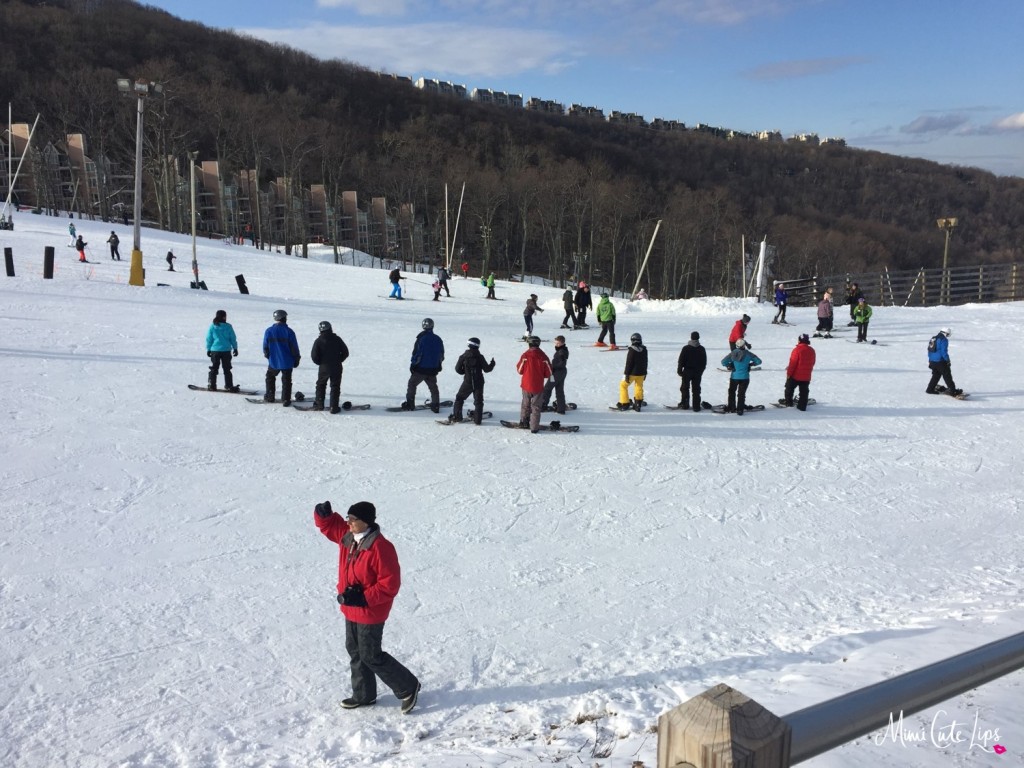 Our group was large; it was about twenty of us taking a lesson from two people. They managed it well; we made up six of that twenty. Per usual everything is fun and games until somebody gets hurt. Don’t get me wrong, we all left with some bumps and bruises. As not to be outdone I acquired more than the rest.

Let me say this, we were falling all day and that is okay. It is one thing to fall on purpose so you can stop. It is another thing to fall because you are simply out of control. In the video below I was OUT OF CONTROL!

Because you want to know how I bust my head on the side of a mountain.

I went snowboarding down, I was doing pretty good although going faster than I would have liked. My snowboard spun me around and I was now coming down the mountain backwards and fast. #FAIL I leaned back on my heels to stop which is what you’re supposed to do. That doesn’t translate the same when you are backwards. So as I was falling to ground {not an issue, I wanted to stop} gravity slammed my body and my head to the ground really hard. So hard it knocked my hat off. No I didn’t have a helmet on and yes I should have gotten one. Funny Fact: I had some terrible looking two strand twist in the top of my hair under my hat. So when I fell both of my hats went flying off my head. I immediately grabbed one while a bit dizzy so nobody could see my hair. Because vanity.

After I returned home I did get it checked out and I’m concussion free. I did have blue bruises from my wrist up to the palm of my hands. Prior to my fall I put my hands down to catch me as I was falling. NEVER DO THAT! I should have allowed my butt to take the hit like I had been doing all day. No bruises there. 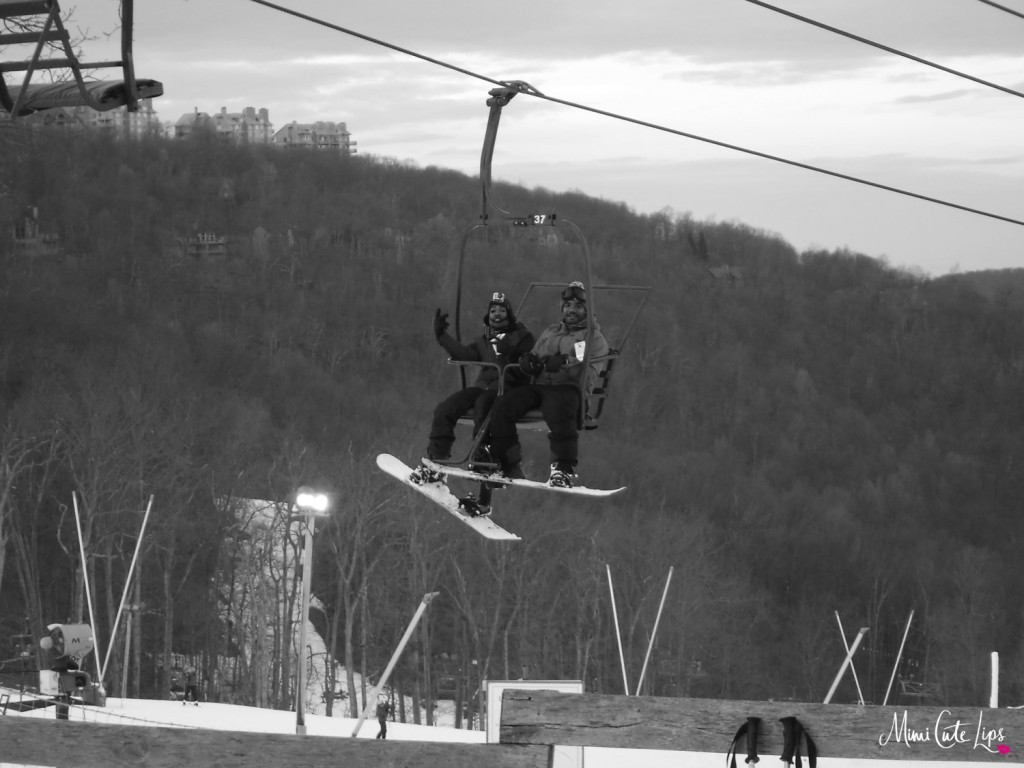 Stuck on the ski lift.

I was done snowboarding for the day but I did have a really good time. I’m definitely coming back to snowboard again just next year I’m going to be more prepared and actually remember a snowboard backpack and a helmet! The boys continued to go out and even went down the big mountains and did really well. Next time I will try skiing, that sounds easier. Now that I’m a spectator in this sport I was able to catch Babe and his boy stuck on the ski lift. Hahahaha 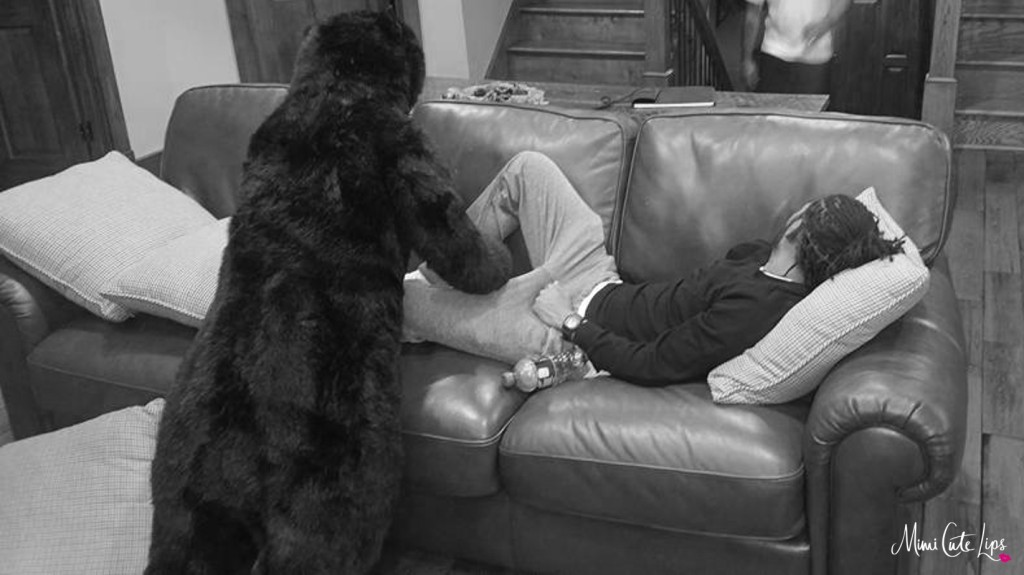 If you fell asleep I promise you someone was going to try and scare the crap out of you with the bear. 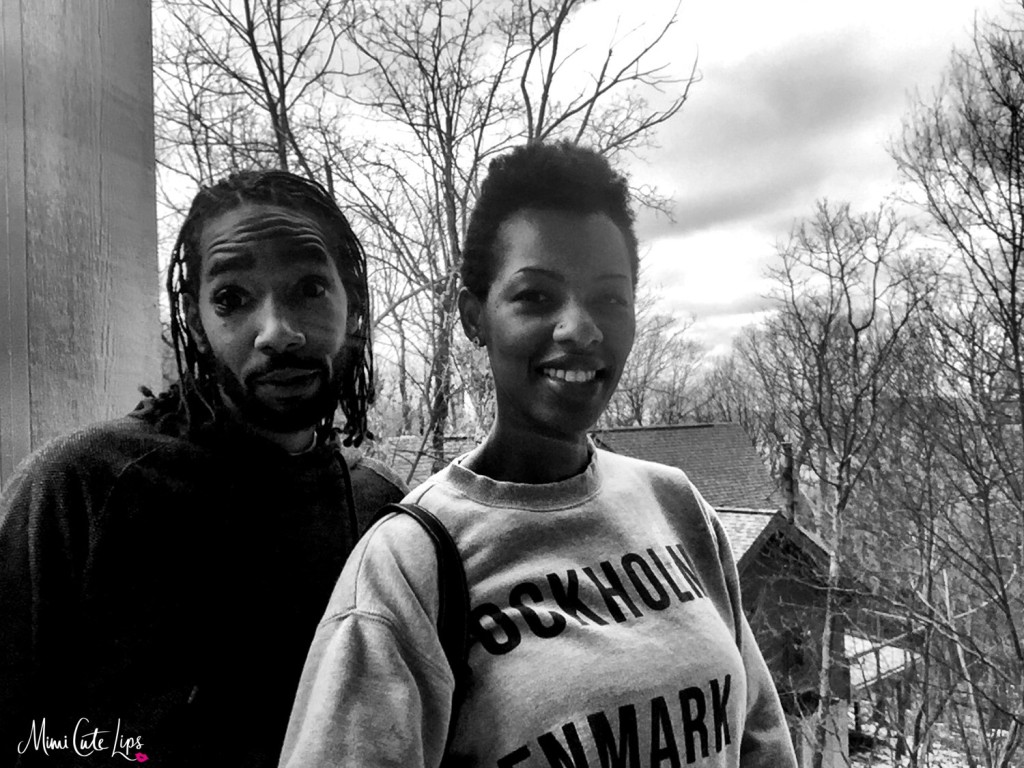 It has been unseasonably warm in the DC area that was the case for Wintergreen as well. Last year it was 7 degrees while snow tubing and our phones powered off immediately. That is why I had no footage. This year I got all the footage. 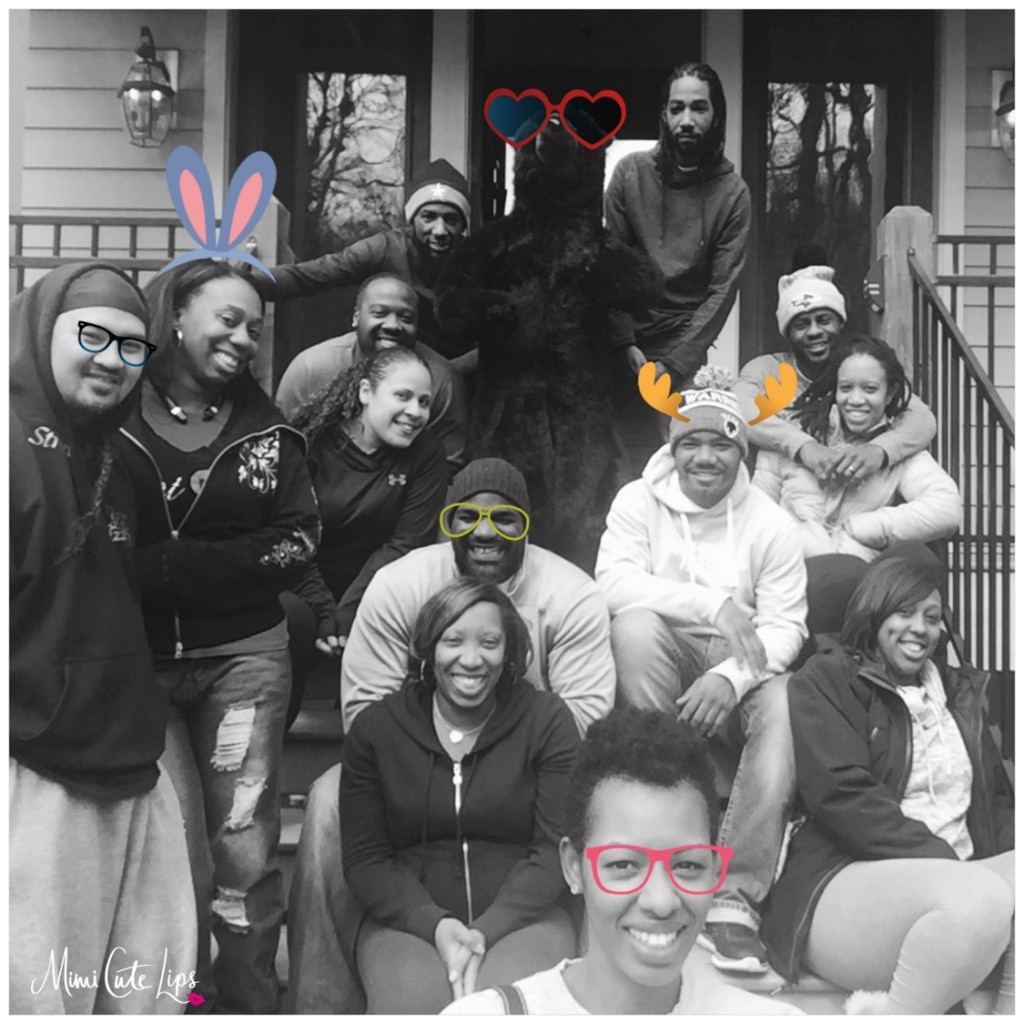 A group shot is a must and we even included the bear in our parting shot.

Stay tuned for next year’s trip, we are going to go someplace warm. 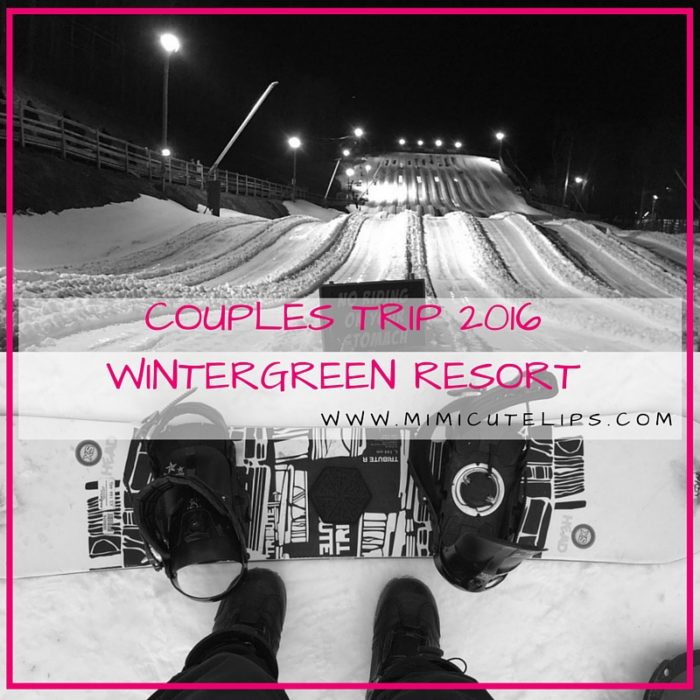 Have you done any couples trips? How was your experience? Chat with me in the comment below or FB, IG or Twitter.