I had an epic Black Panther weekend although the movie doesn’t open until this Friday, February 16th. I’m sharing it all, but no spoilers I promise. I attended a press screening for Marvel’s Black Panther movie. Full Disclosure, I’m not a superhero fan and this was the first Marvel movie I’ve ever seen. Despite all of those things, it was fan-freaking-tastic. 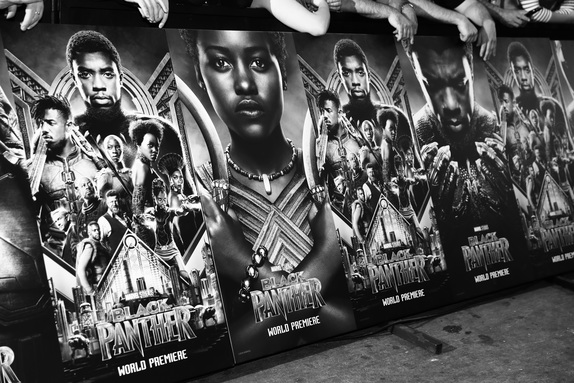 You don’t have to know about superheroes to enjoy this movie.  While watching I never felt like I was missing something.  Since 1988 we had proudly joked about being from the land of Zamunda thanks to Coming to America. Well, in 2018 Wakanda is the new Zamunda you need to go ahead and get into it.  This movie is the symbol of excellence period, but more specifically black excellence start to finish. From the casting to the director, to the producer to the costume designer to it being located in Africa. It is a royal ass good time and I was here for it and you will be too.

In theaters on Friday, February 16th.
A lot of the pre-sales are sold out already but don’t be a quitter.
Get you a ticket, this is the movie of the year! 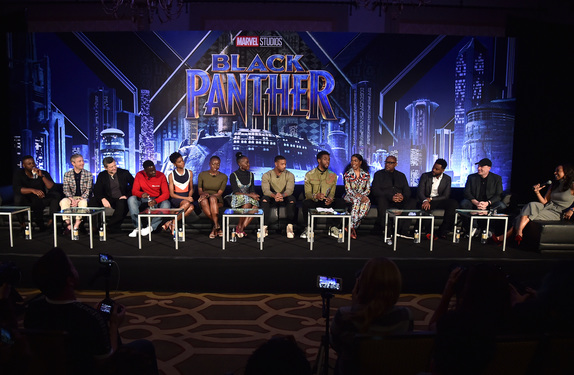 The Cast: Photo by Alberto E. Rodriguez/Getty Images for Disney

Marvel Studios’ “Black Panther” follows T’Challa who, after the death of his father, the King of Wakanda, returns home to the isolated, technologically advanced African nation to succeed to the throne and take his rightful place as king. But when a powerful old enemy reappears, T’Challa’s mettle as king—and Black Panther—is tested when he is drawn into a formidable conflict that puts the fate of Wakanda and the entire world at risk. Faced with treachery and danger, the young king must rally his allies and release the full power of Black Panther to defeat his foes and secure the safety of his people and their way of life. “Black Panther” stars Chadwick Boseman, Michael B. Jordan, Lupita Nyong’o, Danai Gurira, Martin Freeman, Daniel Kaluuya, Letitia Wright, Winston Duke, with Angela Bassett, with Forest Whitaker, and Andy Serkis. The film is directed by Ryan Coogler and produced by Kevin Feige with Louis D’Esposito, Victoria Alonso, Nate Moore, Jeffrey Chernov and Stan Lee serving as executive producers. Ryan Coogler & Joe Robert Cole wrote the screenplay. 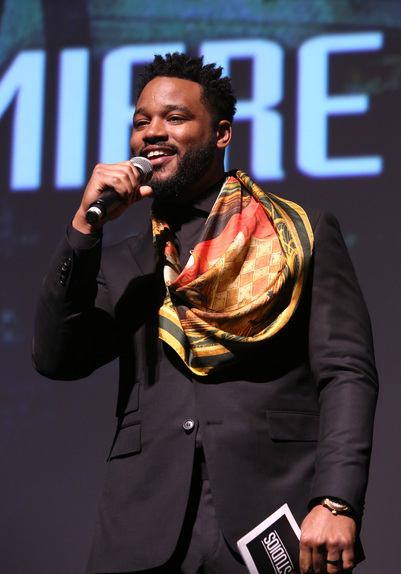 I was already ecstatic about seeing the movie, but then I had the honor and pleasure of sitting down with Black Panther Director Ryan Coogler. First off Ryan is only 31 years old, and this is his third movie; he did Fruitvale Station, Creed and now Black Panther. This man already has two hit films on his hands and this undoubtedly is number three. I’m already calling the record-breaking numbers it will bring in.

Our introduction to one another was hilarious!
Q: Did you anticipate the abundance of excitement before the movie even comes out? (ie. sold out premiers, social media hype, etc.)

A: No, I didn’t; the perspective is different because of the social media component.  I am still caught up in the making of the movie, I want it to be something people like and can sit down and enjoy. That is enough for me, I try to keep things in perspective in that it is just a movie. Fun Fact: Ryan is not on social media.

Q: When you sat down at the very beginning what did you know you had to get right?

A: The casting I would say, I’m a comic book fan myself. You announce who you cast before you began shooting and it is judged from the beginning. The casting comes with implications, I wrote the script with certain characters in mind. We got some of the most talented women in one movie and they are in varying levels of their career. In the 90’s we had three main actors that could do it all (Denzel Washington, Will Smith & Wesley Snipes) they could do action, they had sex appeal, and they were funny. Michael B. Jordan and Chadwick Boseman can each front their own movie but this gave me a chance to make that Denzel and Will Smith collabo movie I never got to see as a kid. Now the kids coming up have Michael and Chad to be the modern-day Denzel and Will. 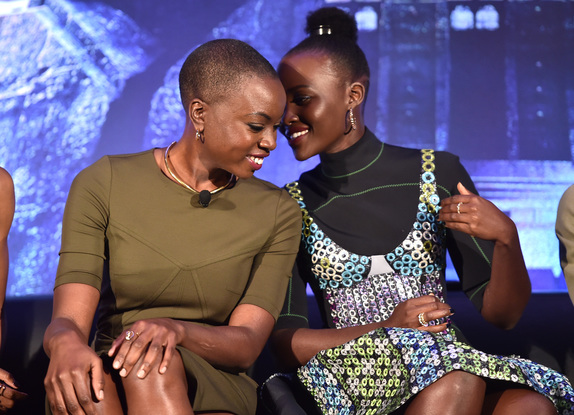 Q: With your responsibility as a creator, what did you want to achieve with this film?

A: It was important for me to infuse my own creativity into this movie. This was important for me to do as a black man with a really specific perspective. I’m an African American Black Man born in the 80’s from Oakland, CA. I see the world a particular way for all for all of those reasons. I had questions as it relates to my identity as well; as a result of that, there is a dynamic there. Being African vs. African American is very interesting and I face that head-on in various stages of my life. I felt I had a responsibility; Hip Hop culture is basically Pop Culture now. The African culture that the world knows the most is what is pumped into Pop Culture and that is the African American version of African culture.  I have a responsibility to really do my homework and penetrate the continent; so I had to visit the continent and spend time in several countries.

Q: What questions were you able to answer for yourself by making this movie?

A: What it means to be African, it is a question I’ve been asking myself since I found out I was black. You have to navigate this world a certain way. It is a conversation every black person has had to have because of the way the world works.  Where I’m from if you don’t have that understanding you could be in situations that can cost you your life. Most people teaching me about my blackness had never been to the very place (Africa) we came from since we were brought here. Going their allowed me to answer that question for myself. 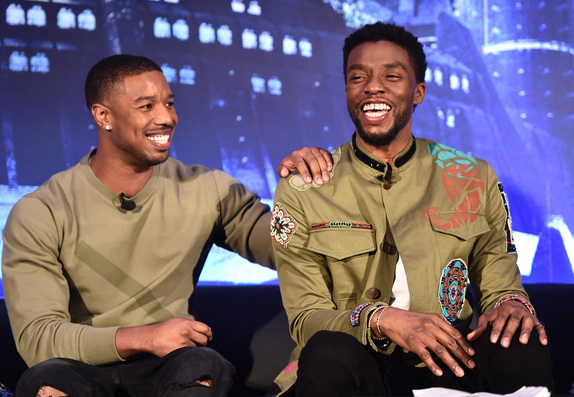 Q: What questions did you want to infuse into the movie?

A: The theme of am I my brother’s keeper.  We broke it down, each character has a different answer to that question. T’Challa (Black Panther) is the only character whose answer changes in the film. My favorite action movies have themes that I can chew on. That is what we were trying to do, to make a movie that functions as what it was supposed to be but also have some depth to it.

Q: What was something you learned about yourself that you didn’t know? 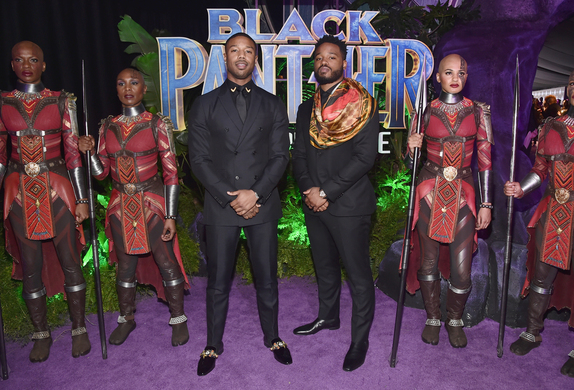 Q: How much did you take out of the actual Black Panther comics?

A: We took tons, we read every run. There is probably something from every run in the movie, except the Dare Devil. We did all the major Black Panther Runs like Ta-Nehisi Coates, Stan Lee, Don McGregor, Jack Kirby, Christopher Priest, Reginald Hudlin, Jonathan Hickman and Jason Aaron.

While this movie is most certainly about T’Challa/Black Panther you can’t overlook the women in his village. They do an amazing job of showing the strength of women. This is the first time I’ve seen us shown in such an epic way. They aren’t quiet, they aren’t lesser. These women are boldly who they are, they speak up when necessary and they take no mess. This is the kind of girl power we need to see more often. They are beautiful, they are, smart, they are hilarious, they work together, they are supportive, they are mothers, sisters, daughters, lovers, and friends but damn it they are strong as hell. Fun Fact: Princess Shuri is my absolute favorite character in the movie.

This is an action movie.

This is an amazing action movie that happens to feature a mostly black cast.

There are tons of movies with an all-white cast and we don’t call it a white movie. We just call it a movie.

Say it with me, everyone, this is NOT a black movie.

This is an amazing movie and you should definitely go see it. 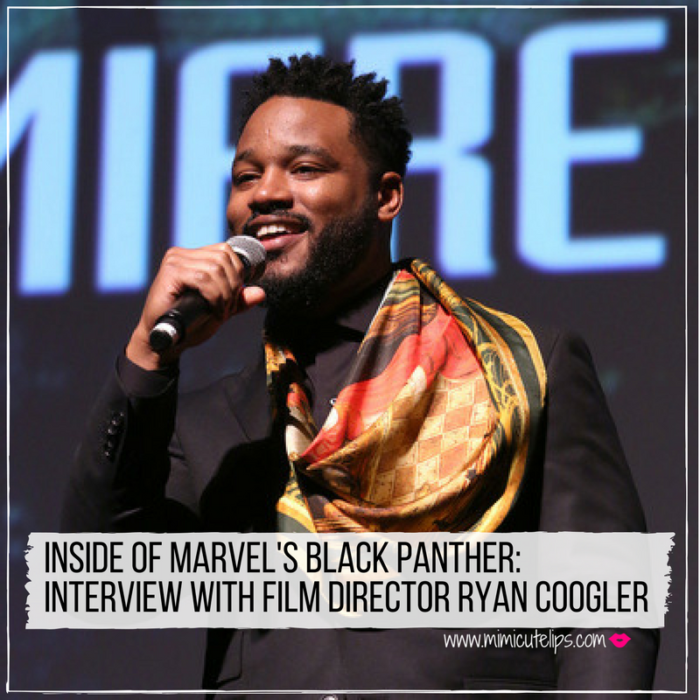 Do you plan to see the movie? Are you a Marvel fan? Chat with me in the comments below or FB, IG, and Twitter.