Happy Women’s Month! In honor of the dope ass women that we are I wanted to feature a few ladies this month. My first feature is Oscar Winner Ruth E. Carter.  She has been Oscar-nominated twice and just recently won for  Costume Design for The Black Panther.

Ruth is a Costume Designer for the big and small screen. Ruth might be new to you, but she is true to this. She has been killing the game for many years and it is dope to see her finally get the shine she has deserved for a very long time. 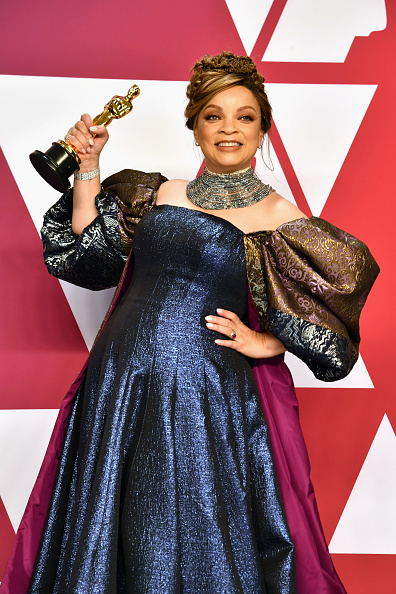 HOLLYWOOD, CA – FEBRUARY 24: Ruth E. Carter poses with the Best Costume Design award for “Black Panther” in the press room during at Hollywood and Highland on February 24, 2019 in Hollywood, California. (Photo by Jeff Kravitz/FilmMagic)

Let me tell you little more about Ruth before I start running her receipts.  Ruth’s unparalleled ability to develop an authentic story through costume and character has made her one of the most sought after and renowned costume designers today.  She has garnered two Academy Award (Oscar) nominations for “Best Costume Design”, for Spike Lee’s Malcom X (1993) and Steve Spielberg’s Amista (1998).  And an Emmy nomination in 2016 for the reboot of ROOTS. She has worked in the industry for over three decades and has been credited with over forty films and counting.

Ruth and Spike Lee have worked on more than then films together beginning with School Daze and including Do The Right Thing, Malcolm X, and Old Boy. Known for her research and diligence to the craft, specifically for her outstanding work for period ensemble films like the highly praised Lee Daniels “The Butler” and Ava Duvernay’s SELMA.

Did you catch all of that tea? Ruth recently celebrated herself on social media and I loved every minute of, so much so I’m sharing for those way in the back. I met Ruth last year during the DC media run for Black Panther. THIS is what she told me about working on The Black Panther. 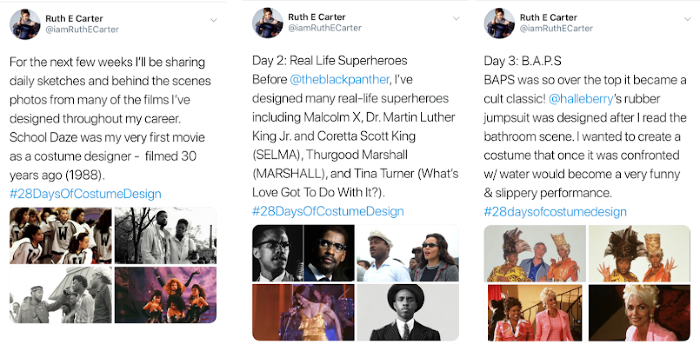 School Daze was her first movie filmed in 1988. I remember watching this movie over and over again. I was definitely too young to be watching, I was 9 when this came out, but my sister was 15/16 so I watched. I remember wanting to dress like the Jigga Boo’s and the Wannabees while singing Good and Bad hair.

Malcolm-X is a classic in the black culture, and Denzel Washington looked just like Malcolm-X. That was all Ruth E Carter. She also designed for SELMA, MARSHALL, and Tina Turner in What’s Love Got To Do With It?. Angela Bassett was a dead ringer for Tina Turner and I would rock several of her looks today.

B.A.P.S is one of my favorite movies of all times. I was so geeked when I found out Ruth designed this cult classic. I can pretty much quote this entire movie start to finish. Like legit, I’m hella annoying. 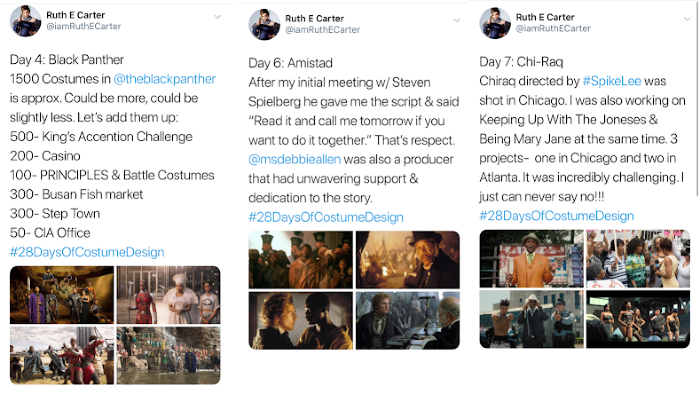 The Black Panther was the best movie of 2018 hands down. The costumes were a huge part of the watching experience. They were incredibly done, the various cultures were represented, the details were on point and there was no way Ruth could not win for this movie.

Amistad was a period piece that made you feel like you were in that time for real. As tough as the story was they looked the part and that is what brings the story to life.

Chi-Raq was a controversial movie, because Spike Lee. One of the things that amused me the most in this movie was Samuel L. Jacksons looks. He was always in full on pimp mode while speaking in riddles. Being Mary Jane, was another show we loved and watched faithfully. Did you hear they are finally doing a FINALE next month?

Rosewood was a story of triumph, a classic example of us sticking together and making things better.

I’m Gonna Git You Sucka is another cult classic. You can’t ever forget about those platforms with the goldfish in them that Fly Guy wore when he was released from jail. They are legendary all of their own, that was an incredible costume design choice.

Do The Right Thing is yet another cult classic and another dynamic collaboration between Ruth and Spike. There are so many signature looks in that movie.  The LOVE HATE  rings are iconic. So much so Spike had them on when he won an Oscar the same night as Ruth. That night was full circle in so many ways.

The Five Heartbeats is another cult classic, I know just about all the words to this movie as well. I damn sure know all the songs and do not hesitate to perform them every time the movie comes on. Those tear away blue sparkly sequin jumpsuits. Ha!

Mo’ Better Blues this is another great, everything Ruth touches turns to gold.

How Stella Got Her Groove Back, was another good one. That is where I fell in love with Taye Diggs aka Winston. I was here for all the tropical looks.

The Meteor Man is one I have not seen, but I adore Robert Townsend.

Jungle Fever is another cult classic. These are movies that you must see or risk having your black card revoked.

Sparkle every one was fancy and fly in this movie. I love the 60’s and 70’s era of fashion. 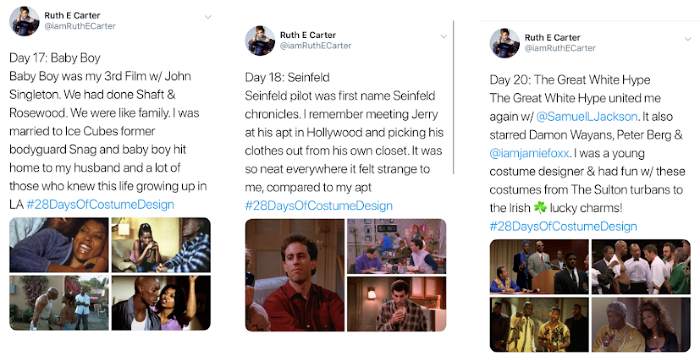 Baby Boy is where we met Taraji P. Henson. We saw Tyrese beyond the little boy singing about Coca Cola on the back of the bus. Okay, Jodie!

Seinfeld, I did not watch but this was hugely popular for years/seasons. I didn’t know Ruth did work on the pilot. Yes!

The Great White Hype starred a lot of comedians, that had to be a hilarious time dressing these fools.

We salute Ruth E. Carter for being a trailblazer every single day.

I named a ton of projects Ruth has worked on above, how much of her work have you seen? Chat with me in the comments below or FB, IG, and Twitter. 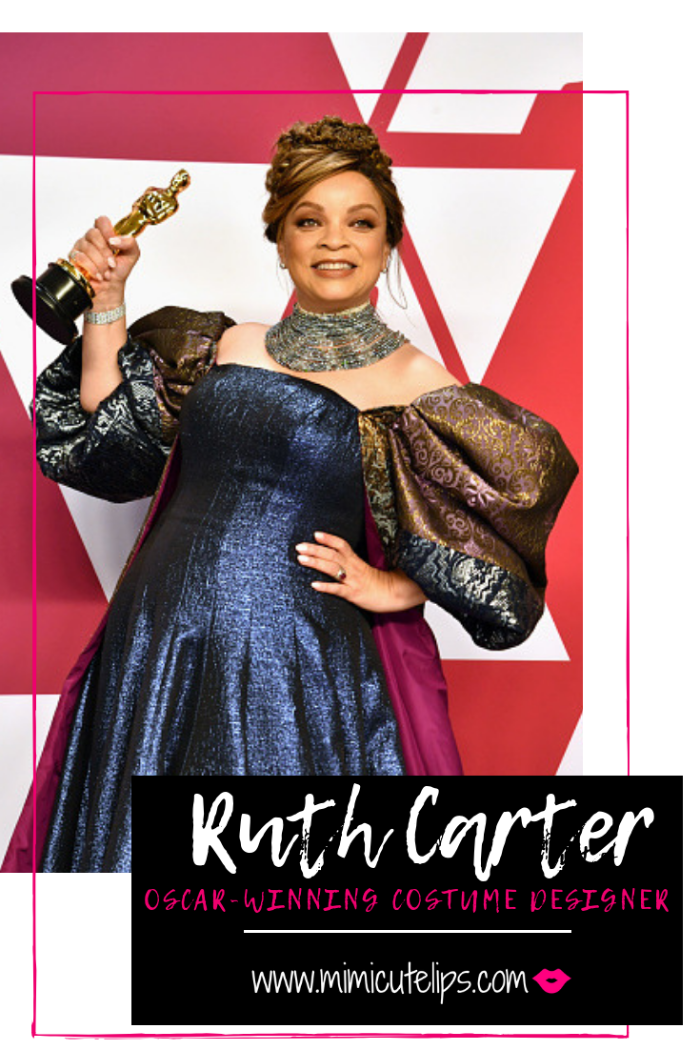